Author’s Note: In last week’s report (this article), we noted that the blended earnings growth rate for the S&P 500 for Q4 had dropped to -0.2% from 10.0% during the week. We stated that the decline in earnings growth was mainly due to the large negative earnings surprise reported by Citigroup, due to the inclusion of charges related to the recently passed tax law in the actual EPS number reported by the company. Upon reviewing notes from analysts after the earnings release for Citigroup, FactSet determined that the majority of analysts were excluding the tax law charges from their EPS estimates for the company.  As a result, the actual EPS number for Citigroup was recently changed from -$7.15 (including the tax law charges and expenses) to $1.28 (excluding the tax law charges and expenses). FactSet is in the process of reviewing (and revising as needed) the actual EPS numbers of other companies in the Financials sector that reported substantial positive or negative earnings surprises due to charges or gains associated with the tax law. 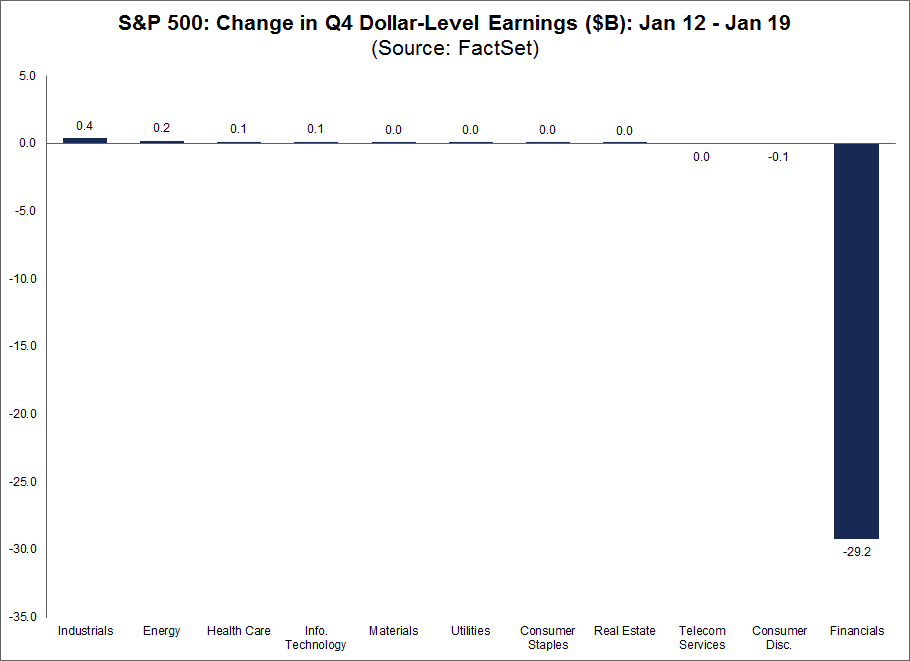 Since January 12, earnings for Citigroup have dropped by $21.3 billion, which is 73% of the total $29.2 billion decline for the Financials sector.

What's Behind the Sharp Decline In Earnings for Citigroup?

On January 16,  Citigroup announced actual earnings for the fourth quarter that were substantially below the expectations of analysts. Citigroup reported actual EPS of -$7.15, compared to the mean EPS estimate of $0.56. The actual EPS of -$7.15 “included an estimated one-time, non-cash charge of $22 billion, or $8.43 per share, recorded in the tax line within Corporate/Other, related to the enactment of the Tax Cuts and Jobs Act (Tax Reform)." Prior to the earnings release, many analysts had not updated their EPS estimates to reflect the impact of the charge. However, since the majority of analysts covering Citigroup provide EPS estimates to FactSet on a GAAP basis, the tax charge was included in the actual EPS for comparison. If Citigroup alone was excluded, the earnings growth rate for the S&P 500 would improve to 7.9% from -0.2%.

While fourth quarter earnings have declined over the past few weeks due to the negative earnings surprises reported by companies in the Financials sector, earnings expectations for CY 2018 have increased over the same time frame due to a combination of a falling base for 2017 and rising estimates for 2018.  Since December 31, the expected earnings growth rate for the S&P 500 for 2018 has increased from 12.3% to 18.6%.

In terms of earnings, the percentage of S&P 500 companies reporting actual EPS above estimates (83%) is above the five-year...

The Q3 bottom-up EPS estimate for the S&P 500 (an aggregation of the median company EPS estimates) increased by 1.1% during the...

Nine of the 11 sectors in the S&P 500 are reporting a yoy decline in earnings for Q2, led by Energy, Industrials, Consumer...

A number of companies are having difficulty providing estimates for future earnings due to the uncertainty surrounding the...