Last month, European Union (EU) leaders held their fourth virtual summit of the coronavirus crisis in an attempt to agree on the required fiscal stimulus to save their COVID-19-decimated economies. While they all support the need for a joint European Recovery Fund, they disagree on its shape, size, and most importantly, its financing. The next virtual meeting takes place in June, but there remains a one trillion-euro elephant in the e-room: corona bonds.

The corona bond, an aptly named form of Eurobond, was first proposed in mid-March by nine of the 19 Eurozone countries. This cry for debt mutualization is led by those countries worst affected by COVID-19, notably Italy, Spain, and France who have together lost over 70,000 lives and were forced to implement the most draconian of lockdown measures in the Eurozone. Unsurprisingly, those less impacted in the north of Europe, including Germany, Finland, Austria, and the Netherlands, remain firmly against the idea. The “frugal four” maintain that Eurobonds are simply an incentive supporting budgetary ill-discipline as opposed to an act of European solidarity. 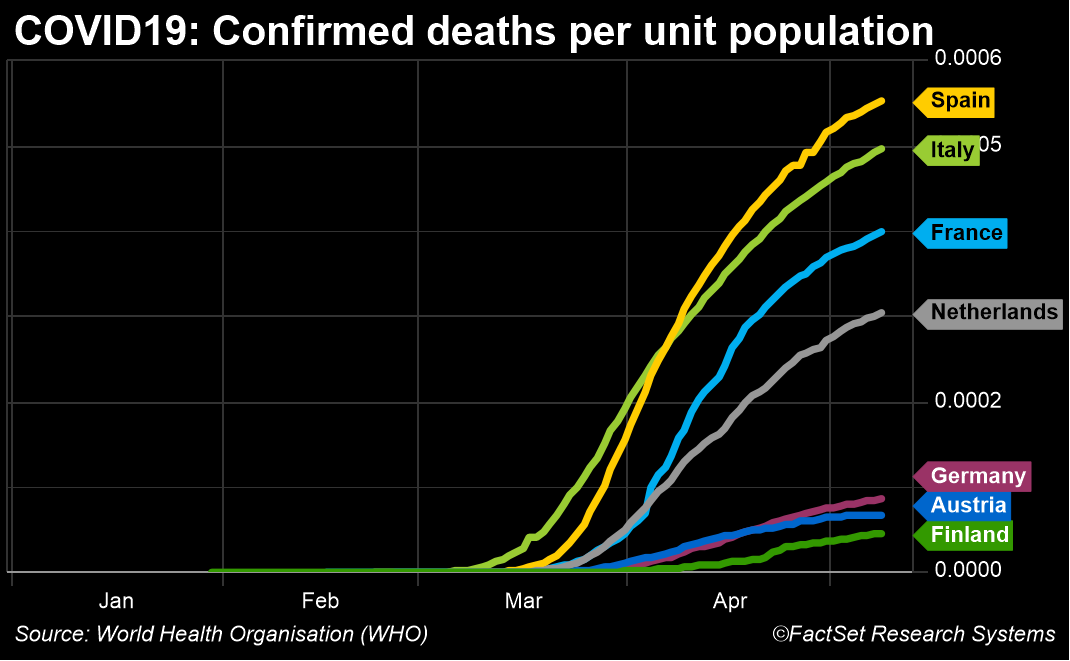 The 2020 economic outlook for the Eurozone justifies the need for a speedy decision on financing the EU COVID-19 recovery fund. Forecasts have turned upside down since the start of the year with those countries at the epicenter of the virus in southern Europe expected to suffer the most. Italian and Spanish economies are estimated to contract this year by 9% and 7.8%, respectively, while their debt-to-GDP ratios are forecasted to reach heights similar to those seen during the EU sovereign debt crisis. Italy’s debt-to-GDP ratio is predicted to increase to 145.2% this year; more than double that of Germany (68.1%) and Finland (67.2%). The issuance of corona bonds would help fund the investment desperately needed by those in the south without adding to their already unsustainable national debt. 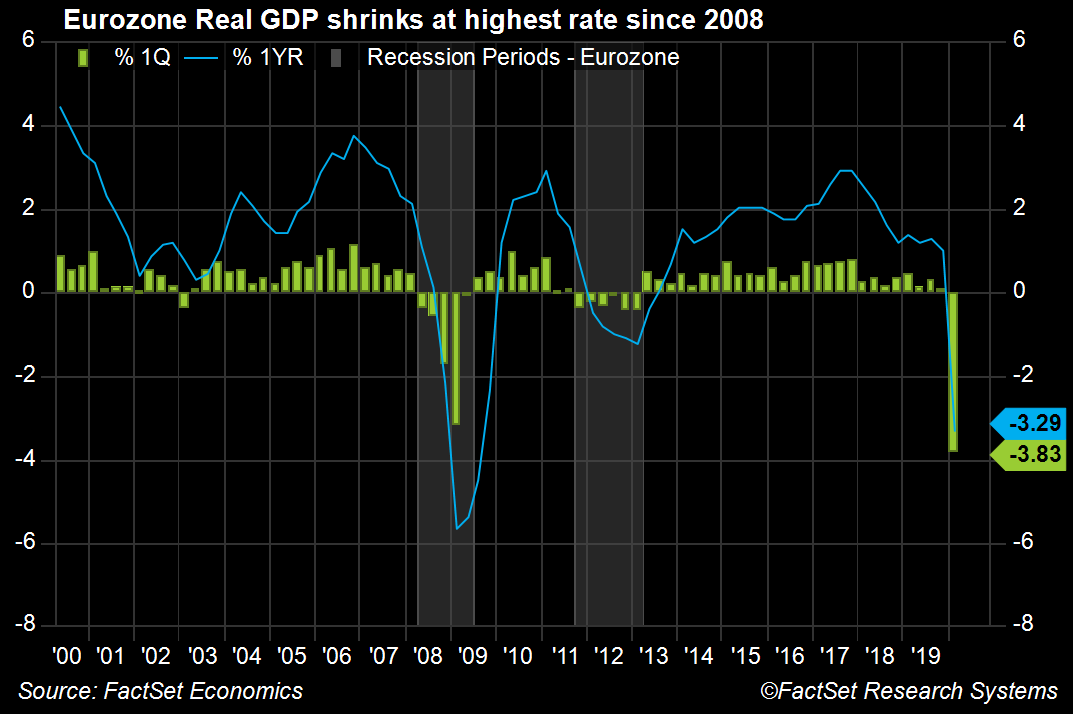 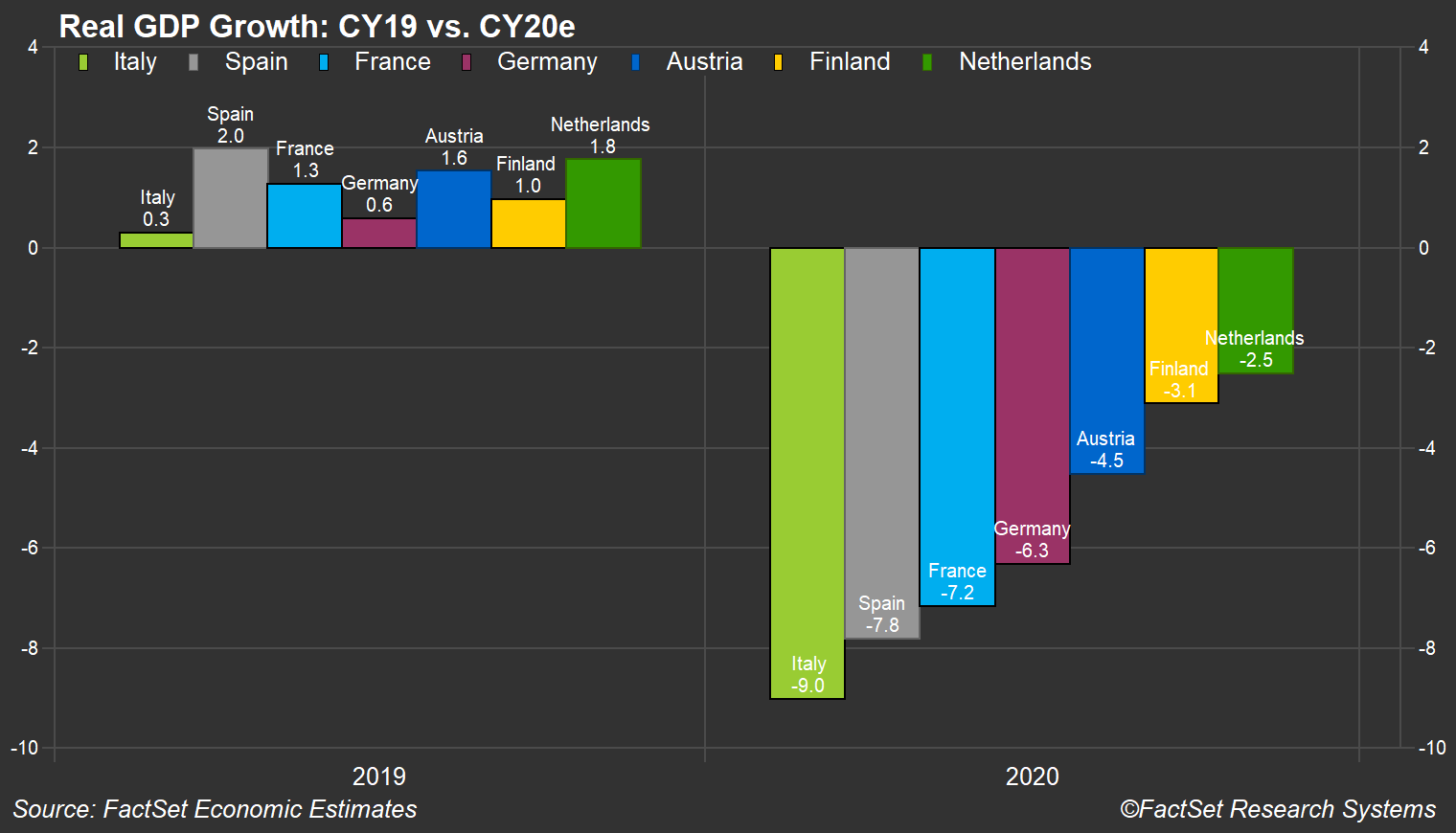 With spiraling debt and a contracting economy, Italy was fortunate enough to avoid a similar fate to South Africa last month. Fitch cut Italy’s credit rating to the lowest investment-grade notch, on par with Moody’s, while S&P retained their rating at two notches above junk. The rating agencies emphasized the continued debt purchases by the European Central Bank (ECB) as a factor for maintaining Italy at investment grade. However, the German court challenge earlier this month against the ECB’s $750 billion Pandemic Emergency Purchase Program (PEPP) could soon put a halt to this debt purchasing and cause rating agencies to re-evaluate. Although highly unfavorable in Germany, the joint issuance of Eurobonds based on a combined EU credit rating is needed more than ever for the struggling countries in the south. 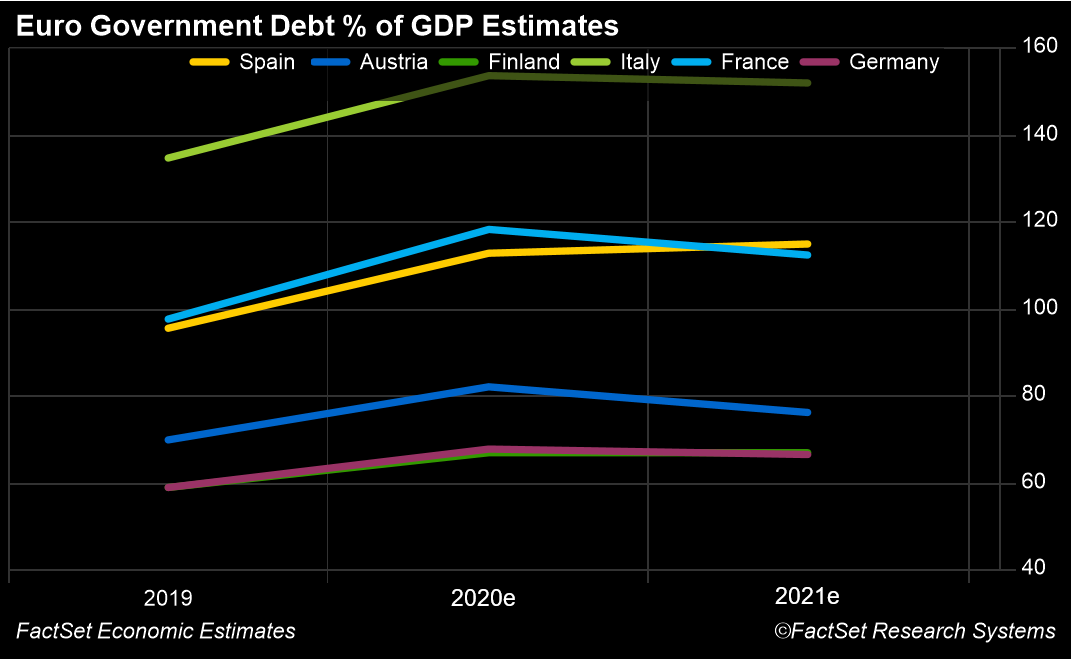 As concerns grow over the ability of those in southern Europe to sustain their mounting debt levels, April saw a sell-off of their government debt with Italy’s 10-year yield increasing to over 2%. This increase has led to an unwelcome widening of the spread between Italian and German yields to more than 2.3 percentage points. This is a spread increase of over 75% since Italy’s first COVID-19 related death on February 22. ECB president Christine Lagarde has been quick to make it clear that the central bank is “not here to close spreads” between the borrowing costs of member states; however, the inability of EU leaders to agree on corona bonds or alternative financing continues to widen the spreads. The issuance of Eurobonds as a joint liability among the Eurozone countries would be a signal of unity and help southern countries to borrow at a much more affordable rate than their current yields allow. 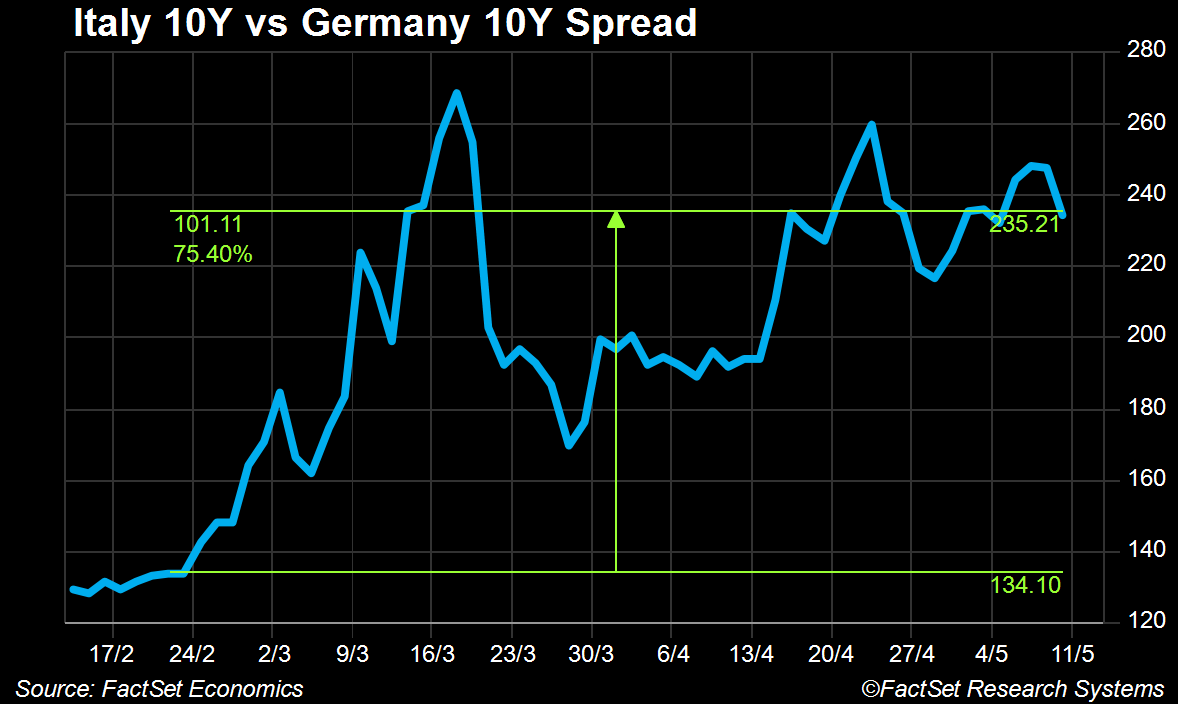 The unresolved COVID-19 recovery fund conflict between northern and southern Europe continues to hurt the value of the euro versus the dollar. While a depreciation in the euro would be expected versus the haven of the U.S. dollar, the euro has seen a notable drop in value after each of the four crisis e-summits as leaders fail to agree on how best to defend its weakest members. The Eurozone has been warned by Lagarde that it is in danger of doing “too little, too late” and as each e-meeting passes, investors are becoming increasingly concerned about this. 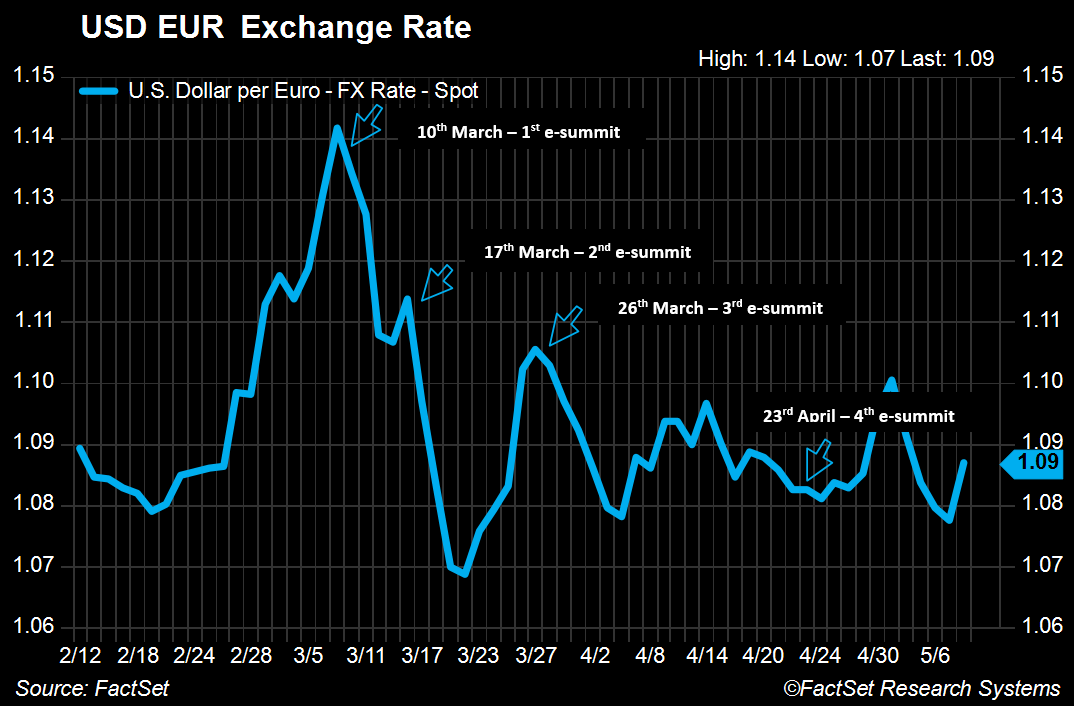 Determining the size, shape, and source of the EU COVID-19 recovery fund is no trivial task. Those in the north remain cynical to the risk sharing and moral hazard associated with supporting their heavily-indebted neighbors. Nevertheless, the issuance of corona bonds would help to ensure that the worst-affected southern European countries are not left behind and help to create much-needed solidarity in a region where euroscepticism has been on the rise long before the sufferings of COVID-19.

This week’s video call between German Chancellor Angela Merkel and French President Emmanuel Macron suggests that Germany is finally cognizant of this. The Germans have now agreed to promote the joint issuance of debt via the ECB to fund a 500 billion-euro COVID-19 recovery fund. While the remainder of the frugal four will require further convincing, this suggests a step in the right direction to save the single currency union and silence the murmuring Italexit, Frexit and Spexit supporters. 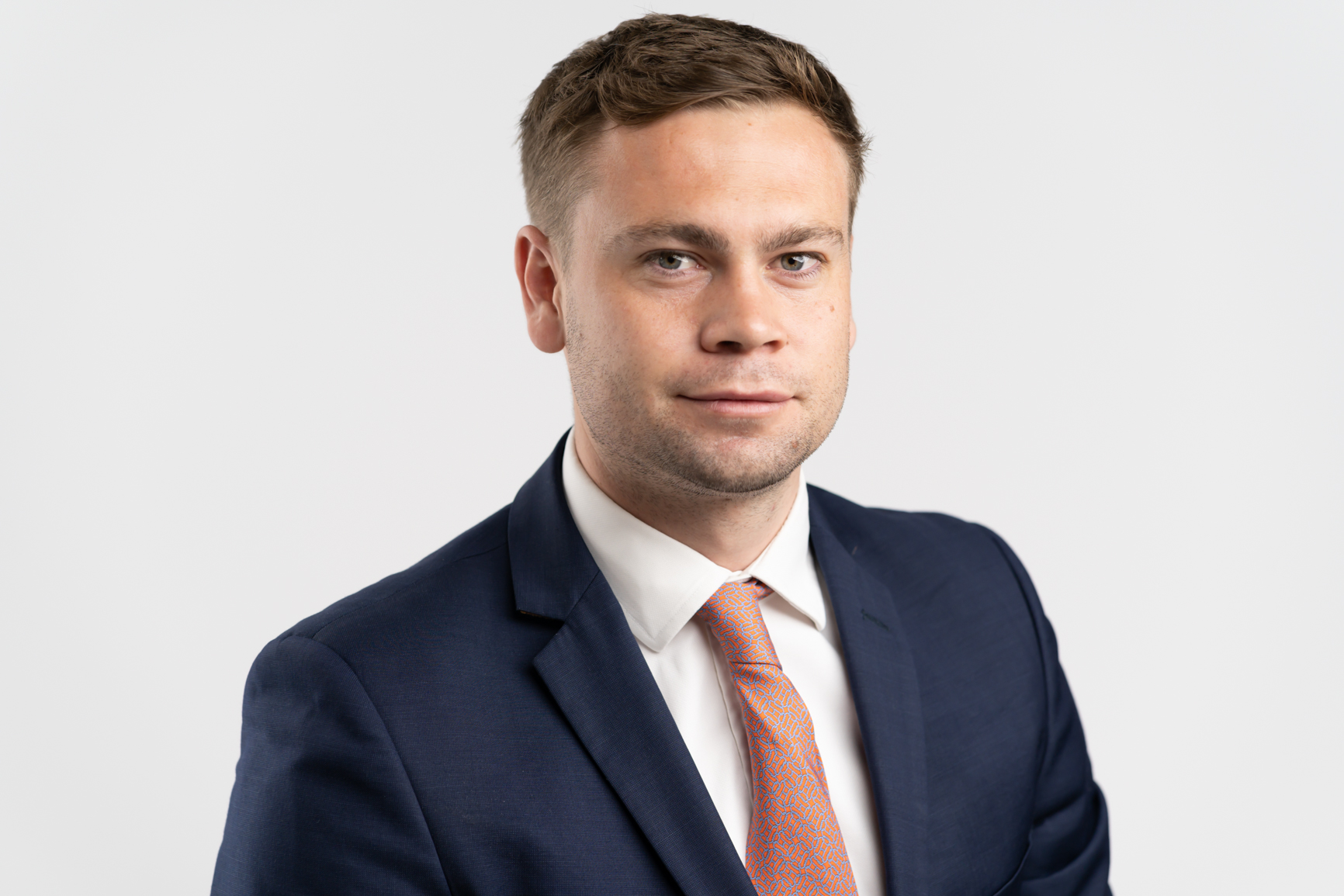 Mr. Thomas Margerison is an account executive at FactSet, London. In this role, he is responsible for growing FactSet’s relationships with hedge fund and boutique asset management clients. Mr. Margerison earned a Bachelor of Science in Industrial Economics from the University of Nottingham and is a CFA charterholder.