Culture and Compliance: How HNWIs View the Role of Regulators

Much like people, organizations have preferences and imperatives that influence everything from their willingness to take on risk to their hiring decisions. Most commonly referred to as “corporate culture,” this amalgam of factors represents not only the way an organization works internally, but how it projects itself to the outside world.

Culture is also an increasingly common point of scrutiny for financial institutions in the post-recession era. The impetus to focus on good culture is no longer just an internal call; regulators have been weighing in on culture too, aware of its power to remove conflicts of interest, protect clients, and maintain the integrity of the market.

In a recent survey of over 1,000 high net worth individuals (HNWIs), FactSet and Scorpio Partnership looked at what clients considered important to their wealth managers’ corporate culture initiatives and where they believed regulators should guide the development of those initiatives.

From the HNWI perspective, while cultural disparities are inevitable in organizations of different size, shape, and focus, good culture should anchor on a distinct set of values. The values HNWIs most commonly indicated were requirements of a wealth manager were honesty, transparency, and integrity.

Among those values, transparency directly tied to HNWIs’ increasing requirements for frequent interaction, updates, and technologies that supported communication. Fifty-eight percent of respondents globally consider operational transparency an important evidence point for their wealth manager’s performance; 57% of investors said the same for transparency into the investment process.

HNWIs see their wealth management firms as directly accountable for improving culture, rather than culture falling to individuals within the firm, political leaders in their respective nation, or the HNWI community. What’s more, 61% said their wealth manager should be directly responsible for fostering this value internally.

As with other financial institutions, wealth management firms are seeing increased pressure from clients and regulators to implement codes of conduct that create corporate cultures focused on ethical operations that put consumers first. That being said, the HNWI community is also warming to the idea of regulation providing a minimum bar for culture.

According to our survey, HNWIs are looking to regulators to support wealth managers on culture by offering guiding positions, but shying away from punitive action for poor performance. A strategy geared towards self-governance is the message delivered by regulatory agencies to wealth managers, and this was found to be echoed by the clients in the survey. 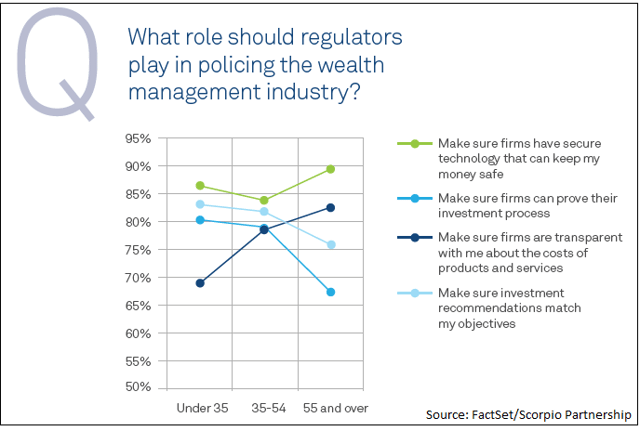 For most HWNIs, the regulator’s function is technical; 86% of the HNWIs surveyed said regulatory efforts should be directed towards minimizing risk for end clients by ensuring firms have secure technology in place to safeguard money. This is not surprising given increased focus on cybersecurity in nearly every aspect of modern life.

Additionally, four in every five respondents also believed regulators should ensure the investment recommendations of wealth managers match the personal objectives of clients.

A generational mind-set shift also hints at the evolving expectations of investors regarding regulation. Younger HNWIs expect the industry watchdog to police client outcomes by ensuring firms can prove their investment process and pay advisors based on client engagement levels. This attitude is not limited to younger HNWIs, extending to the core wealth management client community between the ages of 35 and 54.

By contrast, baby boomer investors believe fostering greater transparency over product and service pricing and ensuring that advisors are sufficiently qualified should be a regulatory focus, with over 80% considering transparency critical. There is a sense that transparency has become something of a hygiene factor for younger investors, who believe that the regulating authority should be reorienting its focus to enforcing client-centricity.

While wealth firms have attempted to cultivate culture that considers these values by implementing ethical codes to which their advisors must adhere, respondents felt that such codes represented minimum standards of conduct rather than anything to excite and inspire positive action.

In order to win business and differentiate themselves in an increasingly competitive industry, wealth managers need to implement guidelines that go above and beyond the standards set by regulators.

Mr. Greg King is Senior Director, Wealth Management and Digital Solutions Strategy and Product Development at FactSet. In this role, he focuses on the allocation of resources for all areas of the Wealth Management business; from market research and product development to implementation of a parallel sales and marketing plan. Mr. King moved to London from the U.S. in 1999. Prior to leading FactSet’s Wealth Management Strategy, he spent eight years as Director of Workstation Solutions for the EMEA and APAC regions, and before that, was Vice President, Institutional Sales in FactSet's UK Investment Management region. Mr. King earned a degree in Economics from Boston College and is a CFA charterholder.

FactSet's Greg King recently participated in a panel discussion of the challenges faced by private banks over the last year,...

COVID-19: Accelerator of the Digital Transformation in Wealth Management?

The global COVID-19 pandemic has made weaknesses in the bank-client relationship in wealth management even more apparent.

As a result of the global pandemic, there’s an enormous focus on improving client engagement models in the face of a completely...

Webcast: How Wealth Managers Can Leverage Technology and Data to Meet Client Demands

In this FactSet-sponsored webcast, two industry thought leaders discuss how wealth managers are evolving to support the growing...