Over the last several weeks, BTU Analytics has highlighted the physical and financial constraints that are limiting upside to U.S. oil and gas production growth, leaving it largely unable to alleviate Europe’s reliance on Russian energy. Following the testimony of several oil and gas CEOs before the House Energy and Commerce Committee earlier this month, many are asking what would happen if the stars aligned for U.S. energy. This would mean that labor and materials constraints were eliminated, while the political and financial will to invest in energy infrastructure materialized to leave production growth unabated. These are big asks, and as we’ve already discussed, they are unlikely.

Here we focus on that perfect scenario and whether there are other issues facing the U.S. energy landscape that could prevent such massive growth.

Unconstrained Production Growth in the Lower 48

Both oil and gas pricing need to be high enough to support rapid growth in U.S. natural gas production. In the recent runup in gas pricing, the current Henry Hub strip is averaging roughly $4.90/MMBtu through 2024. While oil pricing has fallen off in recent weeks, the current WTI strip still averages more than $85/bbl through 2024. These levels are more than sufficient to support growth in gas-focused regions like the Haynesville, as well as oil-focused regions like the Permian. This is illustrated in the chart below, which shows dry gas production in the Lower 48 through 2032. 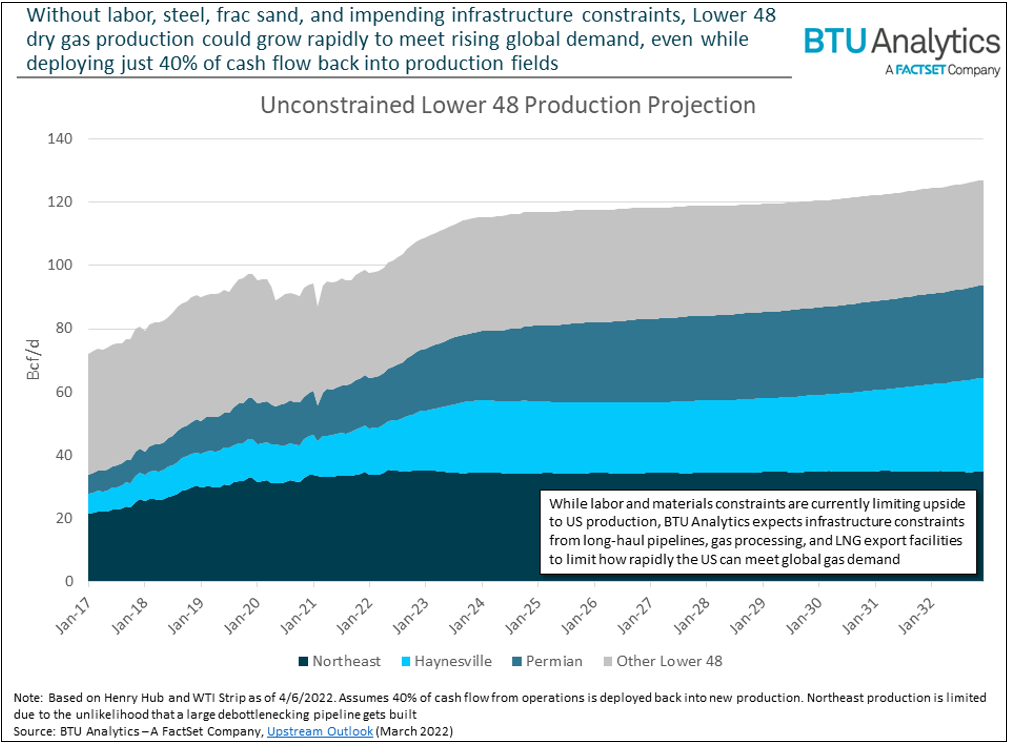 This production is based on BTU Analytics’ proprietary cash flow-driven production model, which uses regional pricing and assumptions for operating costs and capital expenditures to project growth in production. It’s important to note that while this model is mostly unconstrained by the headwinds mentioned above, we’ve added two constraints on the system.

First, reinvestment of cash flow from operations was limited to 40% given that the investor pressure on producers to maintain returns is unlikely to dissipate. Second, natural gas production out of the Northeast was limited given the region is already at pipeline capacity and several new pipeline projects in the region have been successfully opposed by environmental groups, limiting the ability to build new pipelines.

In this scenario, Lower 48 dry gas production would grow by 19% by the end of 2024, which could completely replace the European Union’s reliance on Russian natural gas. Most of this growth is driven by the Permian Basin and Haynesville. However, it’s important to note what these three years of growth would require from an infrastructure standpoint: three Permian-to-Gulf Coast gas pipelines, three Haynesville-to-Gulf Coast pipelines, and more than doubling the existing liquified natural gas (LNG) export infrastructure. Over the following eight years of the scenario, all of that infrastructure buildout would need to be repeated.

This scenario already seems far-fetched, but there’s another reason why it won’t come to fruition: such rapid growth risks the long-term viability of U.S. unconventional oil and gas reservoirs. BTU Analytics analyzes the economics of existing oil and gas production and calculates the amount of existing undrilled acreage in the Oil and Gas Economics View. This data is featured below, showing the total undrilled locations in the Permian and Haynesville, as well as the pace at which these locations would be depleted as producers drill wells to support the production scenario above. 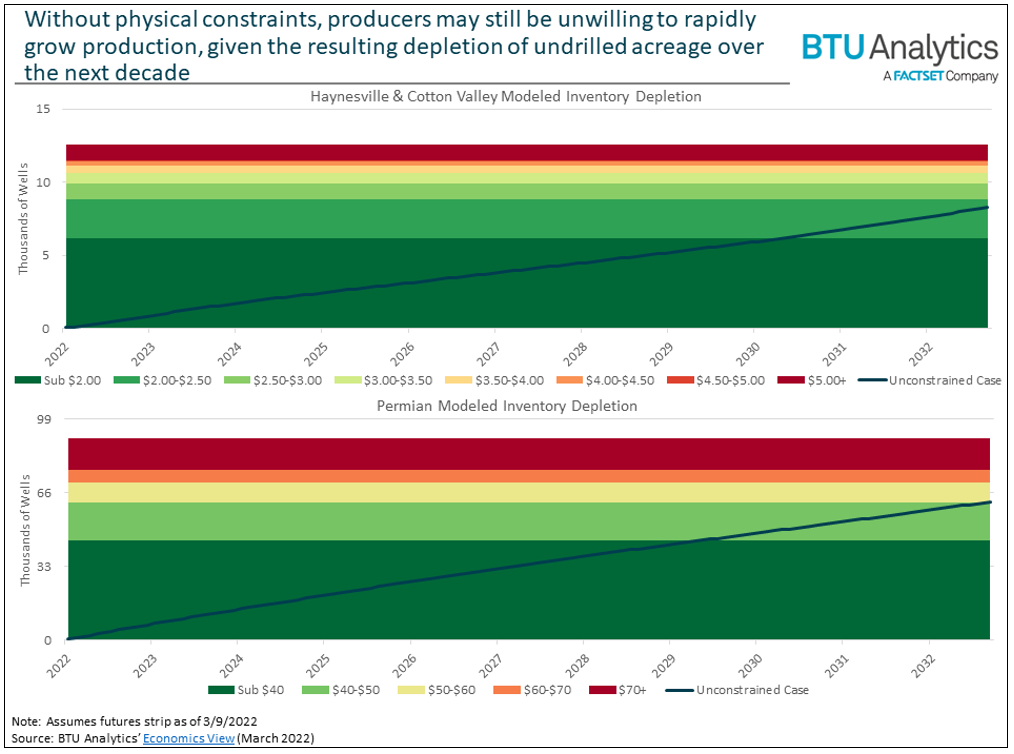 As the scenario highlights, the lowest cost acreage would be completely drilled up in both regions in seven years. For both regions, roughly two thirds of currently undrilled acreage would be depleted by the end of 2032. Many publicly traded companies have highlighted the decades worth of undrilled locations that they have and would therefore likely be unwilling to drill through their best acreage so quickly. Several producers, like Pioneer, have already highlighted this unwillingness to drill across all their acreage.

This example shows how even if U.S. producers wanted to replace the European Union’s reliance on Russian natural gas, it likely wouldn’t be able to do so for very long. There would also be price implications of a rapid explosion in production over the next three years. The stars rarely align for industries as intricate and complex as the U.S. energy industry; this analysis shows that such an alignment may not even be necessary. To see how BTU Analytics incorporates physical, financial, and political constraints into a real-world production forecast, inquire about the Upstream Outlook.