FactSet Experts Look Back at the Crash of 1987

Today marks the 30th anniversary of Black Monday, which still holds the dubious record for the largest single-day percentage decline in Dow Jones Industrial Average history. Such an auspicious occasion (especially one that happened during the decade of excess) is the perfect excuse to reflect, meditate, and postulate on how the 1987 Crash shaped the financial world 30 years ago and how it continues to do so today.

In this article, we’ve gathered our thought leaders' perspectives on Black Monday, the crash, and the state of today's markets. Read on to find out what experts in economics, mergers, and more have to say about the anniversary.

No single event is to blame for the crash that occurred on October 19, 1987; rather a confluence of factors and events caused a rapid erosion in market confidence. The same can be said in 2017, where no single risk factor points definitively to an impending crash. While hindsight is 20-20 (especially looking back 30 years), and today we can identify known risks in the market, any market trigger is likely to come from an unanticipated source.

One of the biggest unknowns right now is what will happen when the Fed starts to unwind its $4.5 trillion balance sheet. Since everyone is aware that this event is coming, the negative impact on fixed income and equity markets are likely mitigated. However, in the event the selling of fixed assets has some unforeseen ramifications, there is a risk of a significant market shock. The possibility of simultaneous unwinding by the European Central Bank and the Bank of Japan could multiply the impact.

Geopolitical factors are always a concern, especially the unforeseen ones. There are two major risks that we can see: rising tensions with North Korea have resulted in higher market volatility in recent months, and the prospect of the U.S. pulling out of NAFTA is a negative for U.S. stocks. How significant are the risks from these two situations worsening vs. some unknown event?

No single factor indicates conclusively that a stock market correction is imminent, but the risks are out there and merit continued attention.

On the 30-year anniversary of the stock market crash of 1987, there are concerns in the market today (as there were back in 1987) about the high valuations of many stocks. On October 11 2017, the value of the S&P 500 closed at yet another all-time high at 2555.24. Based on this closing price, the forward 12-month P/E ratio for the S&P 500 on that date was 18.0. Given the high values driving the “P” in the P/E ratio, how does this 18.0 P/E ratio compare to historical averages? What is driving the increase in the P/E ratio? 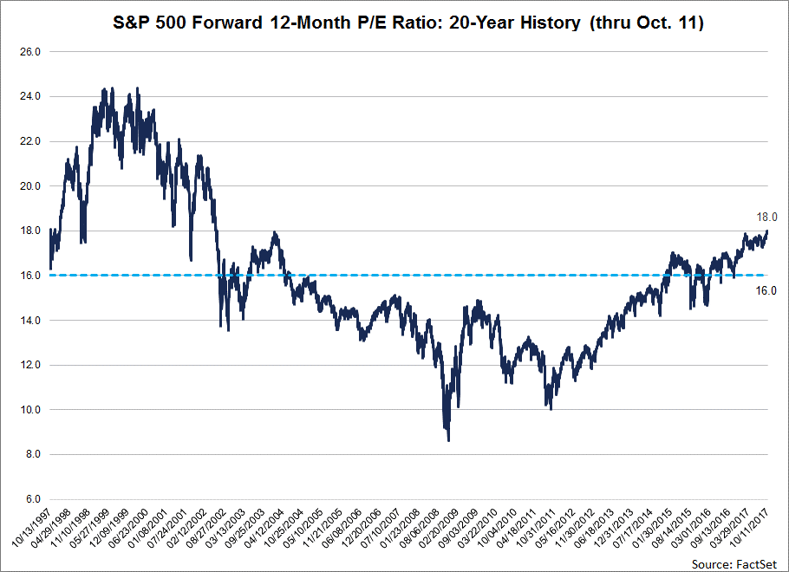 I remember 1987 like it was yesterday. I hunted whales and stalked corporate raiders to get intelligence on upcoming deals—Blue Horseshoe loves Anacott Steel—until it all went south and my father's airline was marked for breakup. Late in the year, I met my old mentor in Central Park after we had a falling out over that deal, and... well, you probably know the rest.

Movies like Wall Street epitomized M&A's high-profile heyday, but let’s be honest, Barbarians at the Gate was a way better movie, presumably because it was based on real life and you just can't make that stuff up. But let's leave the movie review and get back to the history review.

FactSet has U.S. M&A history going all the way back to 1963. With more than 50 years of data, it has been through nearly every imaginable market event (notable exceptions include the Great Depression and Tulip Bulb craze).

On the 30-year anniversary of the October 1987 crash, it is worth looking at all the data we have to see if there are any similarities between now and then. Similar to thirty years ago, equities are on a constant upward surge. From an M&A perspective, there is very little to compare as equity markets have never been the sole driver of deals. However, there are two noteworthy pieces of data to highlight:


Doom and gloom aside, the crash in 1987 may have caused some shock, but it was only short-term and did not stop 1988 from delivering some exceptional M&A history.

In summary, this time it is definitely different, but maybe not. Either way, there is always going to be something around the corner when it comes to M&A. Also, to clarify I did not hunt whales in the 1980s; I spent most of my time with Atari, Transformers, and TV, when I wasn’t outside playing.

When I was asked to think back to Black Monday, my first reaction was “Wow apparently people think I’m old enough to have a frame of reference!” My second reaction was sadness. And my third was acceptance. Accepting that I have collected enough years to reminisce that far back, I decided to have a little fun with the idea.

Back in the third week of October 1987, the #1 movie was Fatal Attraction. The #1 album (remember albums!?) was Michael Jackson’s Bad. The #1 television show was The Cosby Show (followed closely by A Different World). The 10-year treasury yield was greater than 10% (elementary school-age Pat Reilly really missed the call on the long bond!), consumer credit was a paltry $687 billion, and high yield bonds were nascent.

Fast forward 30 years through the fall of the Berlin Wall, Gulf Wars I and II, three recessions, eight summer Olympics, and the incredible rise of the reality television star to the present day. What has changed aside from…everything?

The 10-year treasury yield is a paltry 2.36%, consumer credit has exploded to $3.7 trillion, and high yield bonds are now a robust (if rich) tradeable market.

We are truly living in A Different World where debt has become a Fatal Attraction, yet on the face of it, we can’t seem to agree if that is Bad. What would Rudy think?

The Captain looks back fondly on October 1987.  He was young, and though you might find it inconceivable, even better looking than he is now.  It was a glorious fall day, which he spent rock climbing, only to have it marred by the inconvenience of a market crash.

Anniversaries like these are better used for remembering the good times, rather than reminders to stockpile dried food in anticipation of the impending zombie apocalypse caused by the market anniversary of the crash. The market doesn’t observe anniversaries. Period.

Even though a crash did occur, the market recovered somewhat and was up for the year. The cause of the crash was a market de-stabilizing trading strategy called portfolio insurance. Reforms were enacted that limited the violent gapping made possible from the strategy.

The crash wasn’t catastrophic because it didn’t morph from a market crash into a liquidity crisis.  At the start of the global financial crisis of 2007-2008, there was a market crash, which in turn was caused by different, destabilizing financial innovations. What made the GFC different was that it became a liquidity crisis. It spread to the financial system, and participants wouldn’t trade because they didn’t know who could open.

There is a theory on market crashes that every generation must experience them, since reading about them in a book doesn’t convey the same sense of loss you feel while you watch the trading screens, your hubris, job, and savings all get flushed. The Captain would thus like to end with an admonishment worthy of Cassandra: survival is a skill.