Due to the imposition of nationwide measures to contain the COVID-19 pandemic, Canadian economic activity was sharply curtailed starting in March 2020. With businesses shuttered and residents staying home, the negative impact on the Canadian economy has been severe.

According to data from the World Health Organization, as of August 12, 8,987 Canadians have died from COVID-19 and the country has seen just over 120,000 total cases. To mitigate the spread of the virus, the country’s borders have been restricted, states of emergency were declared across provinces and territories, and the Quarantine Act requires anyone entering Canada to isolate for 14 days and mandates masks or other face coverings. The numerical comparison with the U.S. is stark. While the U.S. population is nine times bigger than the Canadian population (330 million vs. 38 million), COVID-19 cases in the U.S. are 42 times the number of Canadian cases (five million vs. 120,000). Eighteen times more U.S. residents have died from COVID-19 than Canadians (162,000 vs. 9,000). The U.S.-Canada border has been closed since March 18 to all non-essential travel; in late July, the closure was extended to August 21. With confirmed U.S. cases still increasing at an average rate of nearly 55,000 per day so far in August compared to less than 400 per day in Canada, it is reasonable to think that the border between the two countries could remain closed for some time to come. 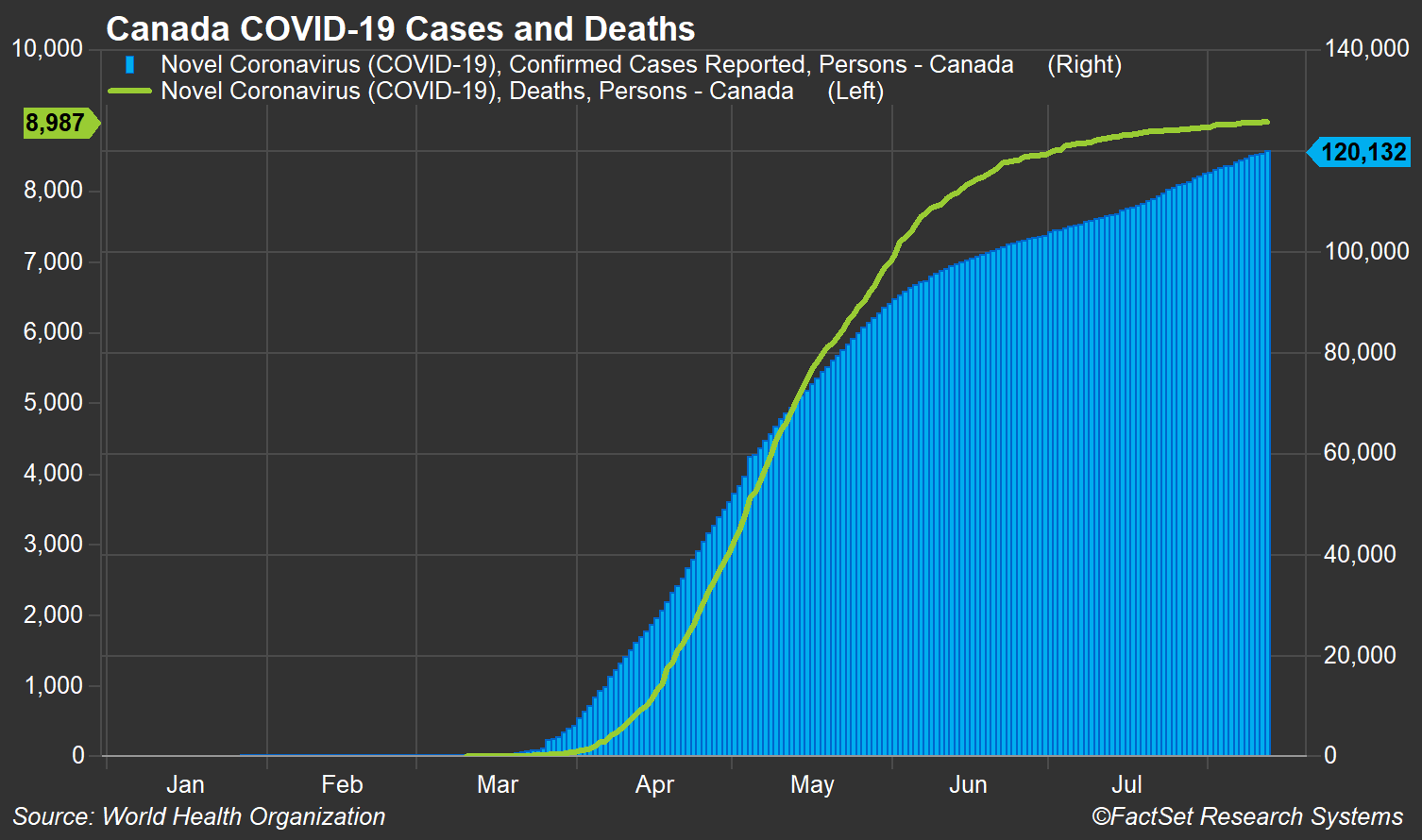 GDP Contracted Sharply in the First Half of 2020

The Canadian economy contracted by 8.2% (annualized q/q%) in the first quarter. Household spending plunged by 9.0% (the steepest quarterly decline on record) as consumers faced job losses, income insecurity, and limited spending opportunities. However, the report on the second-quarter economic performance is expected to be far worse. The median consensus estimate of analysts surveyed by FactSet shows a real GDP decline of 40% in the second quarter followed by a strong growth resurgence in the second half of the year. For the year, analysts project that real GDP will fall by 7.0% in 2020 followed by a rebound of 5.2% in 2021. 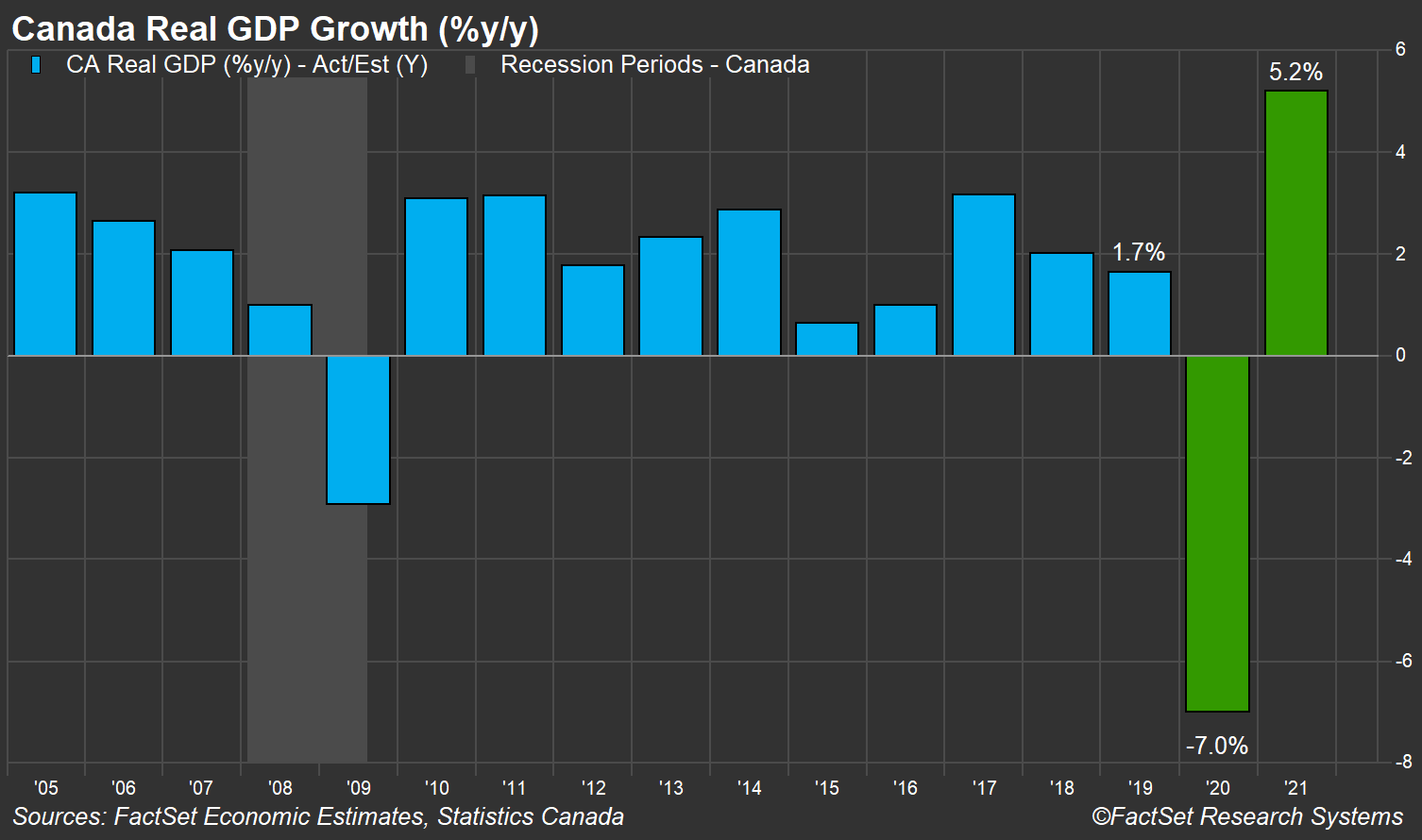 With the pandemic halting travel and economic activity this spring, world oil demand plummeted, leading to a collapse of global oil prices. Oil production and exports are key components of the Canadian economy, thus the price drop hit Canada hard. According to the U.S. Energy Information Administration (EIA) in 2019, Canada was producing 5.5 million barrels of oil per day, ranking it fourth in the world behind the U.S., Russia, and Saudi Arabia. As of April (the last EIA data point available), production had fallen to below 5.0 million bbl/day, a 10.7% drop compared to a year earlier. More recent data shows even steeper declines. According to the Government of Alberta, where the vast majority of Canada’s oil is produced, May oil production was down 14.6% compared to a year ago. Weekly oil rig counts from Baker Hughes show that Canadian drilling activity was down 86.2% in the first week of August compared to the same week in 2019. 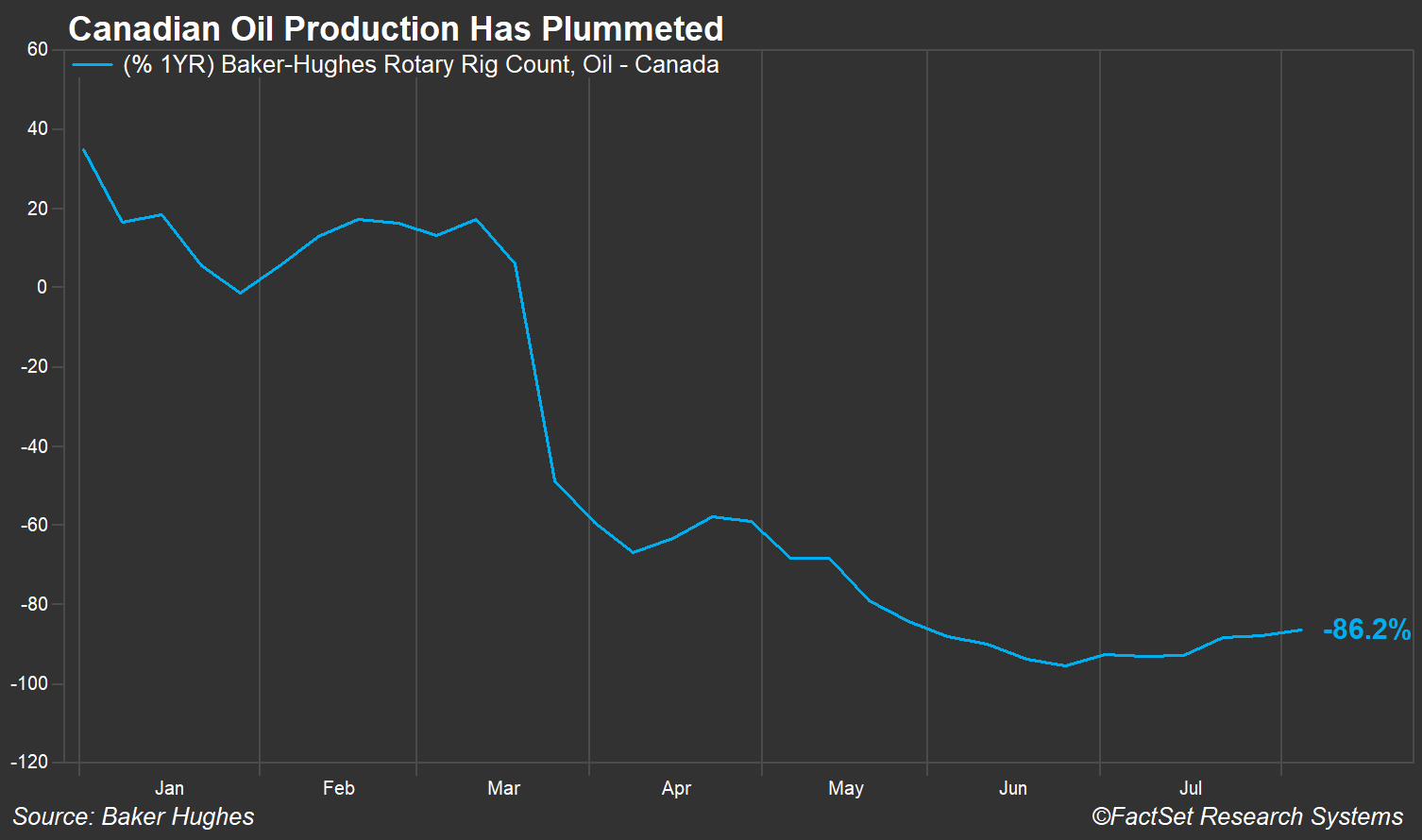 After peaking at 13.7% in May, Canada’s unemployment rate fell to 10.9% in July. However, nearly 2.2 million Canadians remain unemployed, nearly twice pre-pandemic levels. The two hardest-hit sectors have been wholesale and retail trade and accommodation and food services, which lost a combined 1.2 million jobs in March and April; as of July, 736,000 of these jobs have come back. Overall, 1.66 million (55%) of the 3 million jobs lost in the first two months of the lockdown have been recovered. The pace at which lockdown restrictions are lifted and economic activity resumes will largely determine how quickly the labor market recovers. However, permanent changes in consumer behavior are likely to suppress the recovery, particularly among the elderly and other at-risk population segments. 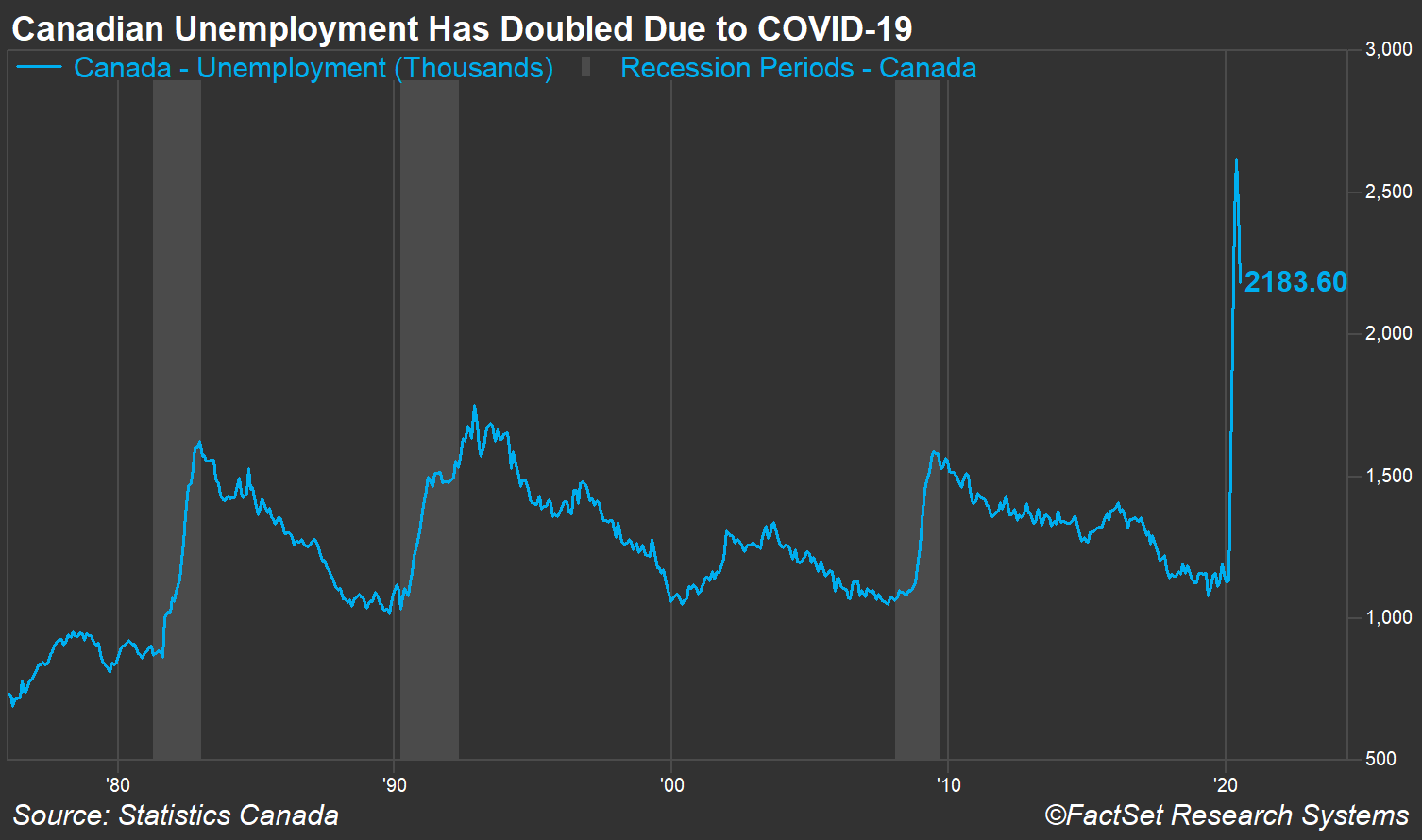 After declining for two consecutive months on a year-over-year basis due to steep drops in energy prices, total consumer price inflation registered 0.7% growth in June compared to 2019. According to Statistics Canada, prices rose in five of the eight major CPI components with increases in food and shelter prices contributing the most to the overall increase. Food prices were up 2.7% year-over-year, far outpacing both total and core inflation. This hits lower-income households particularly hard given that a larger portion of their income is spent on food. With job losses and reductions in hours worked having an outsized impact on lower-wage occupations, the pandemic has led to an increase in food insecurity among Canadians. 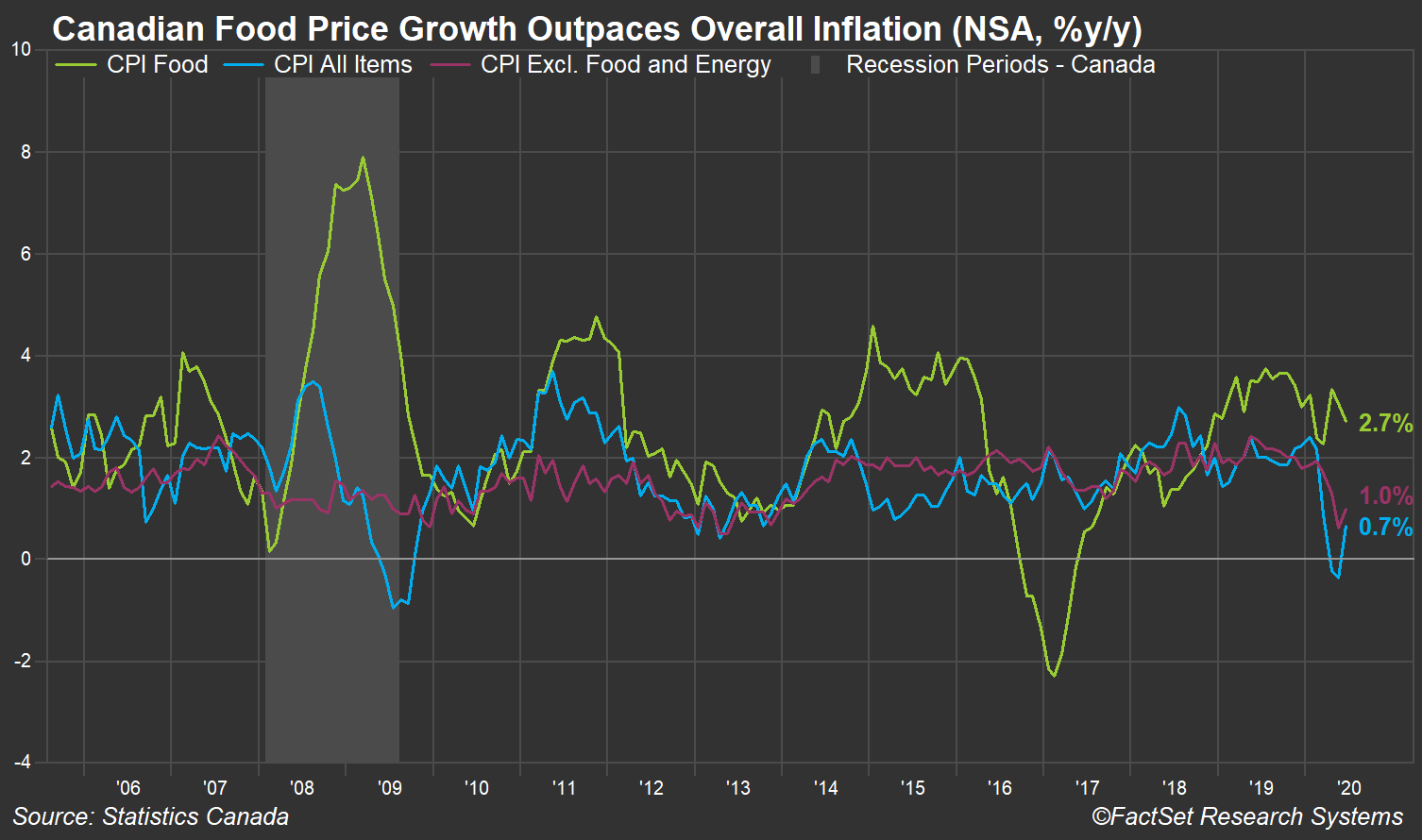