As we near the end of 2020, now is a good time to reflect on the economic impacts that are still being felt across the Asia Pacific region. In its October 2020 World Economic Outlook, the International Monetary Fund (IMF) revised its 2020 global projections higher, indicating a less severe global recession compared to its previous forecast publication. The revisions were driven by better-than-expected performance in the second quarter for large advanced economies and a return to growth in China. According to the IMF, “Activity normalized faster than expected after most of the country reopened in early April, and second quarter GDP registered a positive surprise on the back of strong policy support and resilient exports.”

It will be interesting to see if there are any differences on how this post-pandemic recovery plays out vs. its original trajectory prior to the pandemic. Let’s examine some of the inflection points and trends that will guide us in monitoring the recovery happening in China and its potential global impacts for the remainder of 2020. Below we present five charts that summarize the current state of the Chinese economy.

There was a huge upside surprise in the October 13 release of China’s import figures for the month of September: imports surged 13.2% on a year-over-year basis vs. the FactSet consensus of 0.2%. The strength of this indicator not only confirms China is on its way to a V-shaped recovery following the COVID-19 pandemic, but its demand for global goods might also help the recovery of the global economy in general. China’s unique position is much stronger than for most other countries, as confirmed by the IMF as they revised China’s projected 2020 GDP growth to 1.9%, while growth projections for the rest of the G20 nations remain negative. 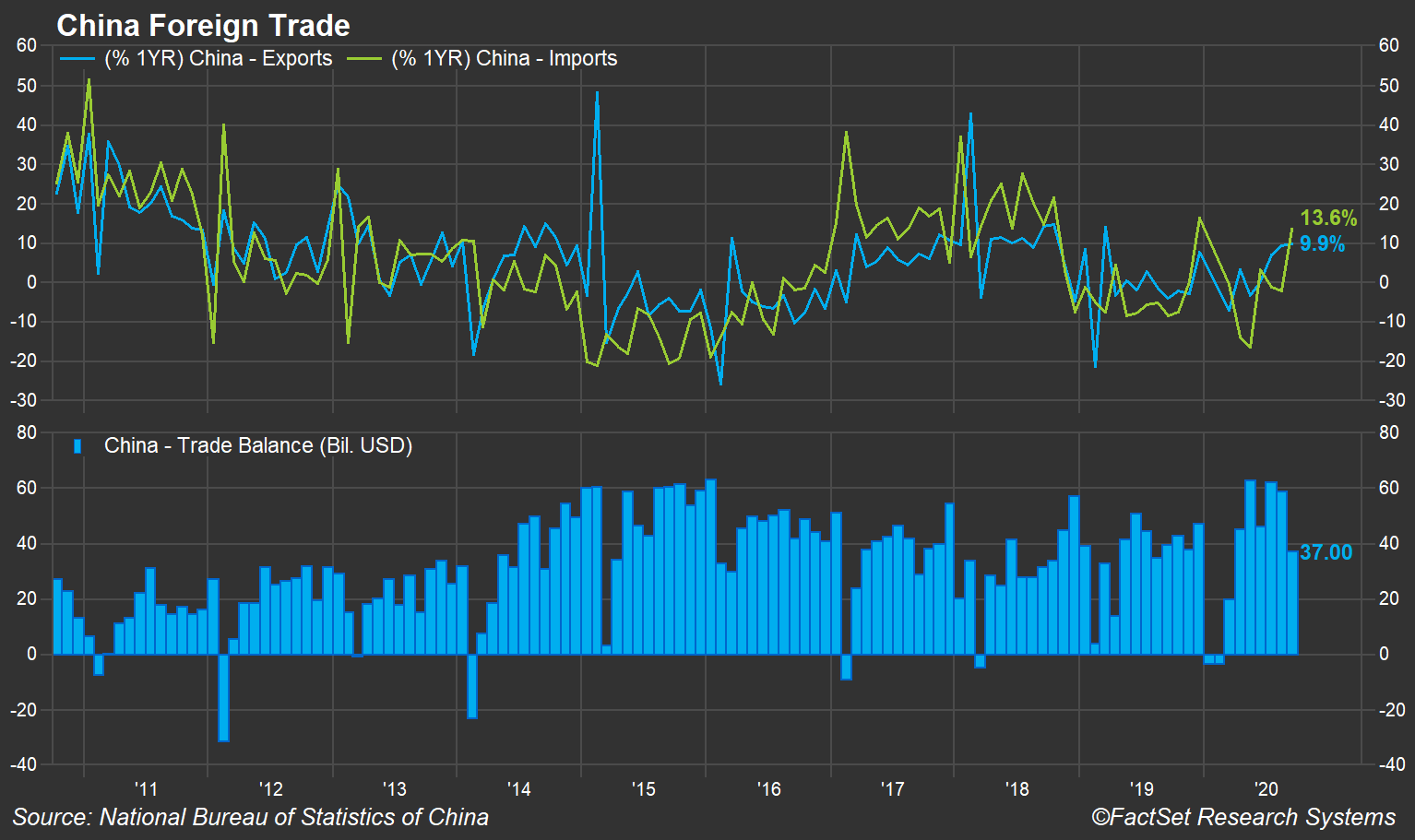 The disparity in the pace of recovery between China and the rest of the world is also reflected in the continued strengthening of the Chinese RMB vs. the U.S. dollar. The USD/CNY rate is now retesting a double bottom of 6.7 USD/CNY that was reached for the first time 18 months ago. 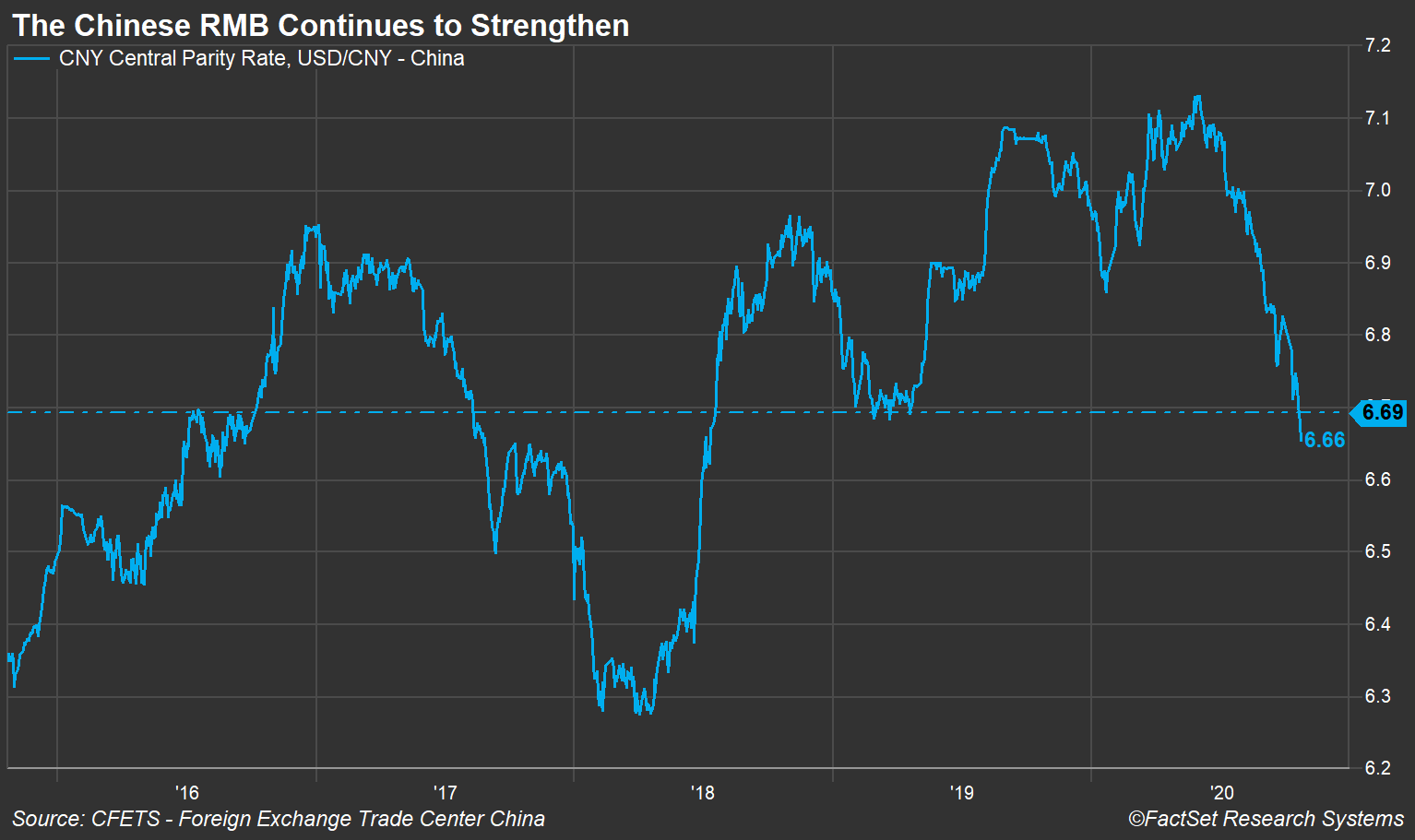 August 2020 retail sales were the first sign that Chinese consumers were ready to resume spending with growth turning positive for the first time since the outbreak of the virus earlier this year. The August 0.5% year-over-year increase was followed by a 3.3% jump in September, reinforcing the trend. Seven spending categories saw double-digit growth, including four discretionary spending categories: Tobacco & Liquor (17.6%), Cosmetics (13.7%), Jewelry (13.1%), and Automobiles (11.2%); Beverages (22.0%), Cultural & Office Appliances (12.2%), and Commodities (10.7%) rounded out the list. Two categories remain in negative territory: Petroleum & Related Products (-11.8%) and Catering Services (-2.9%). 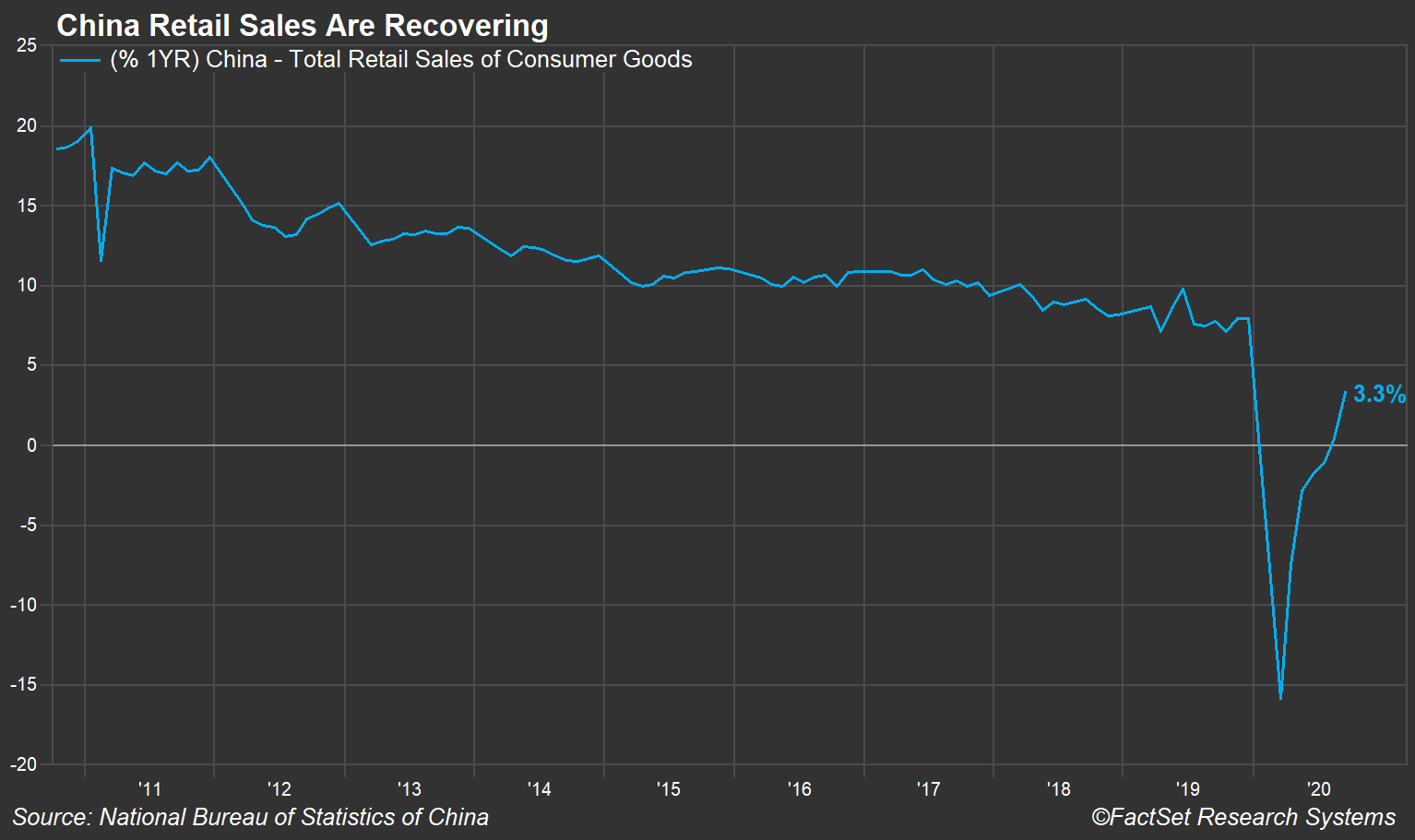 One persistently rising negative indicator caused by the pandemic is the unemployment rate. The official registered unemployment rate, which covers urban areas, has risen from 3.6% in the end of 2019 to 5.7% at the end of the second quarter of 2020. The scenario isn’t encouraging for the third quarter either with fresh college and university graduates joining the workforce.

The government is aware of the issue and has taken steps to address it. According to a recent Xinhua News article, the Ministry of Education has launched a program to boost employment and entrepreneurship among Chinese university graduates and encourage small, medium-sized, and micro enterprises to recruit them. 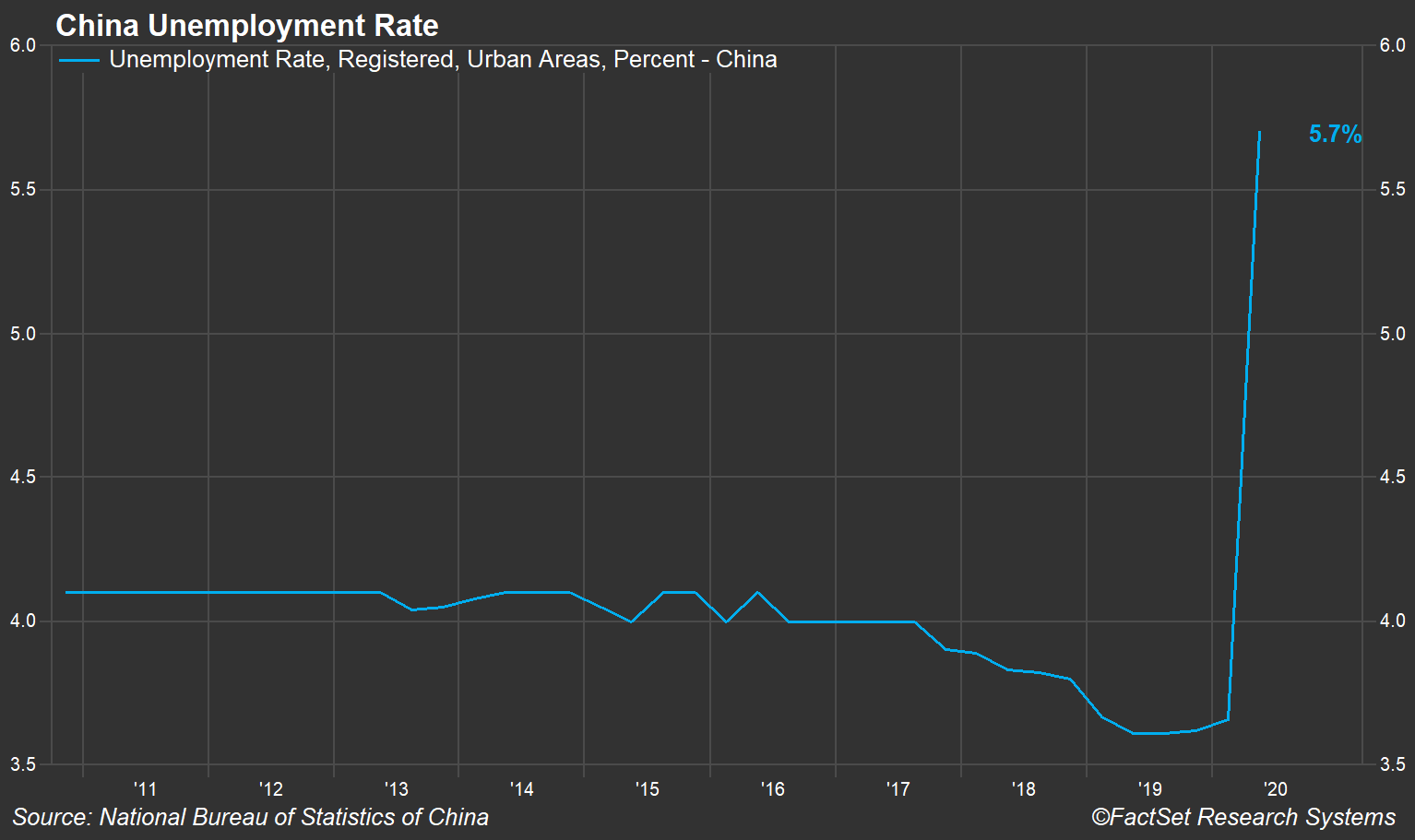 Debt Financing Is Rising but In Line with the Expanding Economy

The Chinese government has increased its debt financing to spend more on job-creation projects and that spend so far has reverted to within historical ranges when measured as a percent of GDP, which is also rising. The IMF supports these initiatives, stating, “The additional debt incurred to finance such endeavors is more likely to pay for itself down the road by increasing the overall size of the economy and future tax base than if the borrowing were done to finance ill-targeted subsidies or wasteful current spending.” 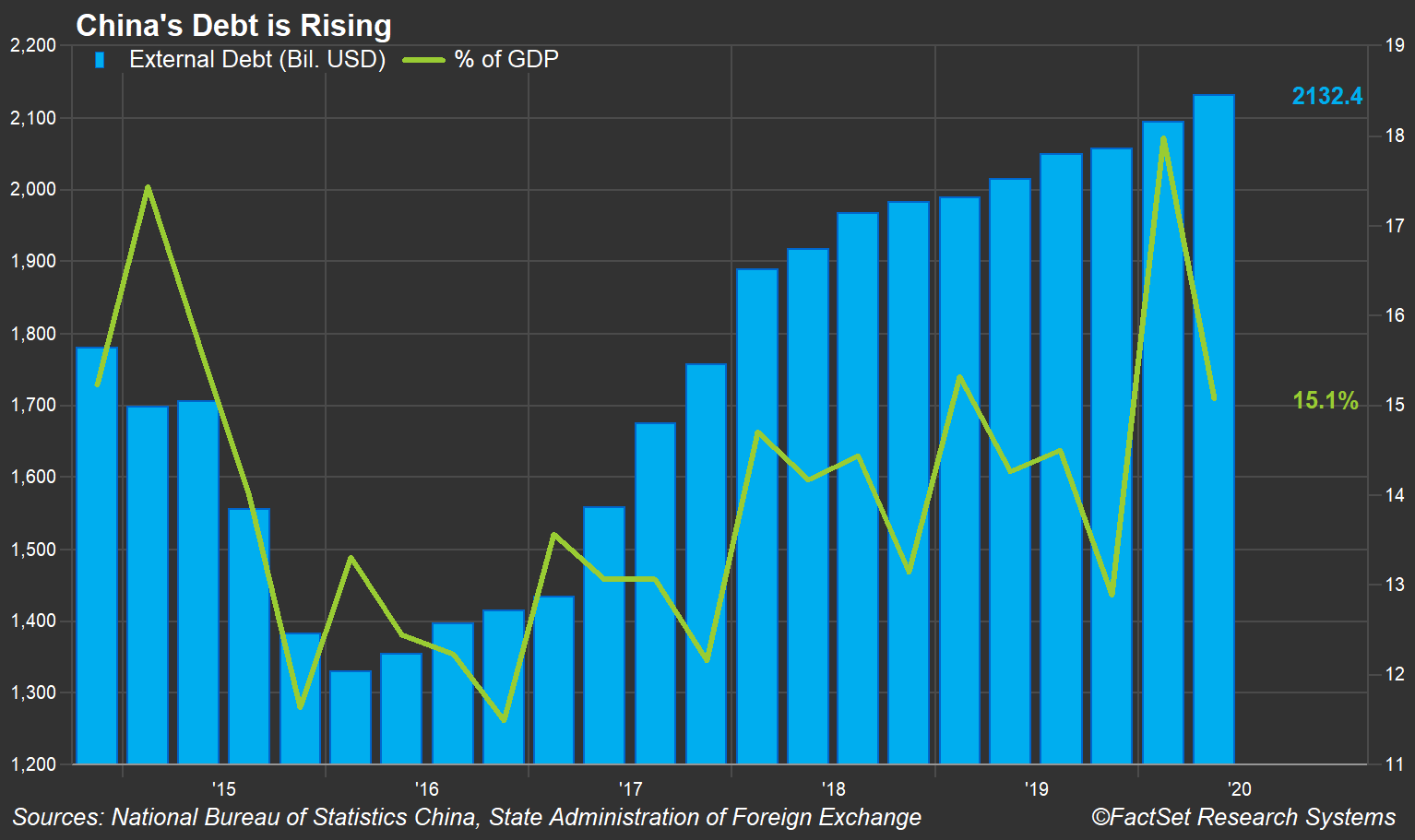