As we rang in the new year, most people were happy to bid farewell to 2020. The COVID-19 global pandemic led to the worst global economic downturn since the Great Depression. Optimism was high over the summer that economic growth would see a strong rebound as infection rates fell and parts of the economy began to reopen. However, autumn brought with it cold temperatures and more indoor gatherings; as a result, the U.S. recorded its worst infection and death rates of the pandemic in the month of December.

Despite the hope around the distribution of several new vaccines and the long-awaited federal stimulus package, the virus resurgence is having a devastating impact as the U.S. death tolls surpasses 350,000. Recent economic data points to slowing growth in the fourth quarter with many economists now fearing that the U.S. economy may experience a double dip recession. Here are five charts to guide us as we enter 2021.

Following growth of 33.4% in the third quarter, U.S. economic growth is projected to slow to 4.5% in the fourth quarter according to the median consensus estimate of analysts surveyed by FactSet. Analysts have been adjusting their forecasts lower over the last several months; the May consensus number called for 8.2% growth in the fourth quarter. We’re now also seeing significant downgrades to the growth forecast for the first quarter of 2021. As of July, analysts were projecting a 5.9% expansion for early 2021; by December, that number had been revised down to 2.5%. As more economic data comes in over the next few weeks, we’ll get a better picture of economic performance in the final quarter of 2020, culminating with the publication of the advance GDP numbers on January 28. 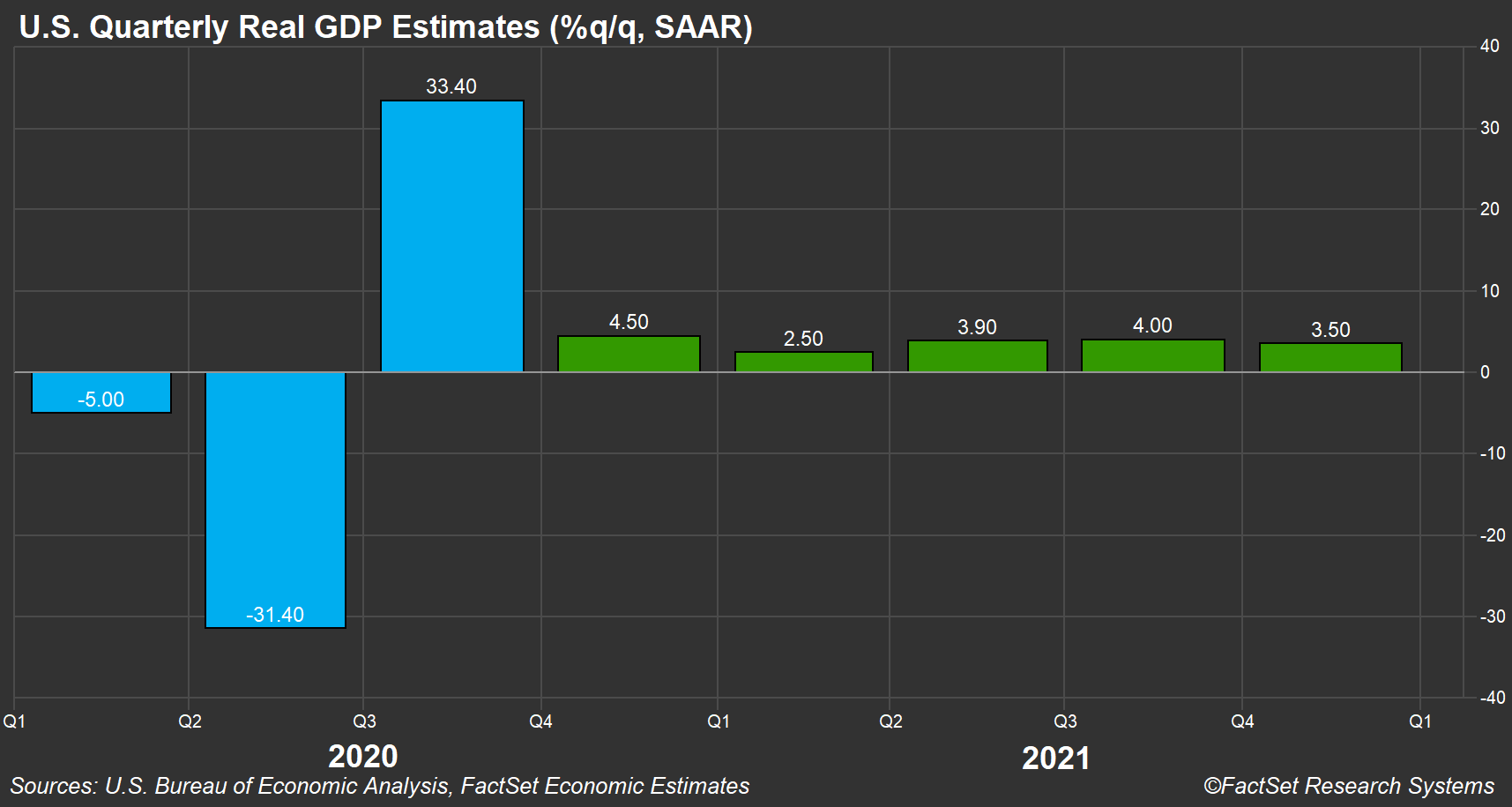 Slowing consumer spending does not bode well for the GDP outlook. In November, personal consumption expenditures dipped by 0.4% from the previous month, the first monthly decline since April. The decline was largely due to a 1.0% drop in spending on consumer goods led by motor vehicles and parts, which fell by 3.6%, the second consecutive monthly decline. The Conference Board’s Consumer Confidence Index fell unexpectedly in December, a potential sign of weak consumption spending for the month. The December monthly consumption data (released on January 29) will merit an especially close inspection, as the historical seasonal adjustment factors are likely to exaggerate any decline in spending. 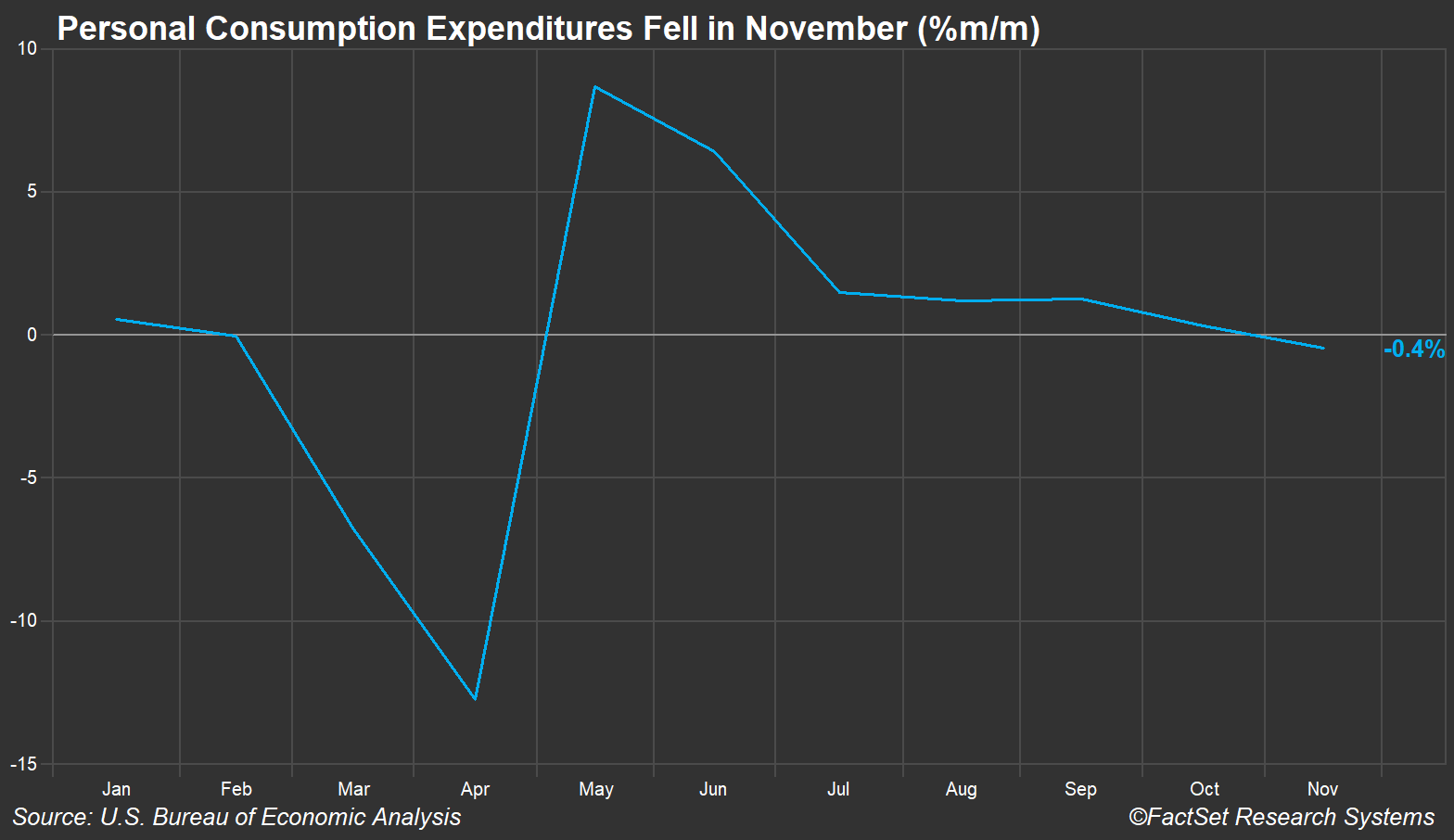 The robust improvement we saw in the labor market in the late spring and summer months stalled in the last four months of the year. While weekly initial claims for unemployment insurance have remained below one million since the end of August, the four-week moving average trended higher throughout the month of December due to a surge in claims in the first half of the month. The most recent report showed 787,000 initial claims filed in the week ended December 26. Continued claims are currently 5.2 million, three times pre-pandemic levels.

The final U.S. employment numbers for 2020 will be published this week, with the weekly claims release on January 7 and the December employment situation release on January 8. Analysts surveyed by FactSet are currently expecting an increase in nonfarm payrolls of 114,000 in December, the slowest monthly increase since April’s collapse in payrolls. 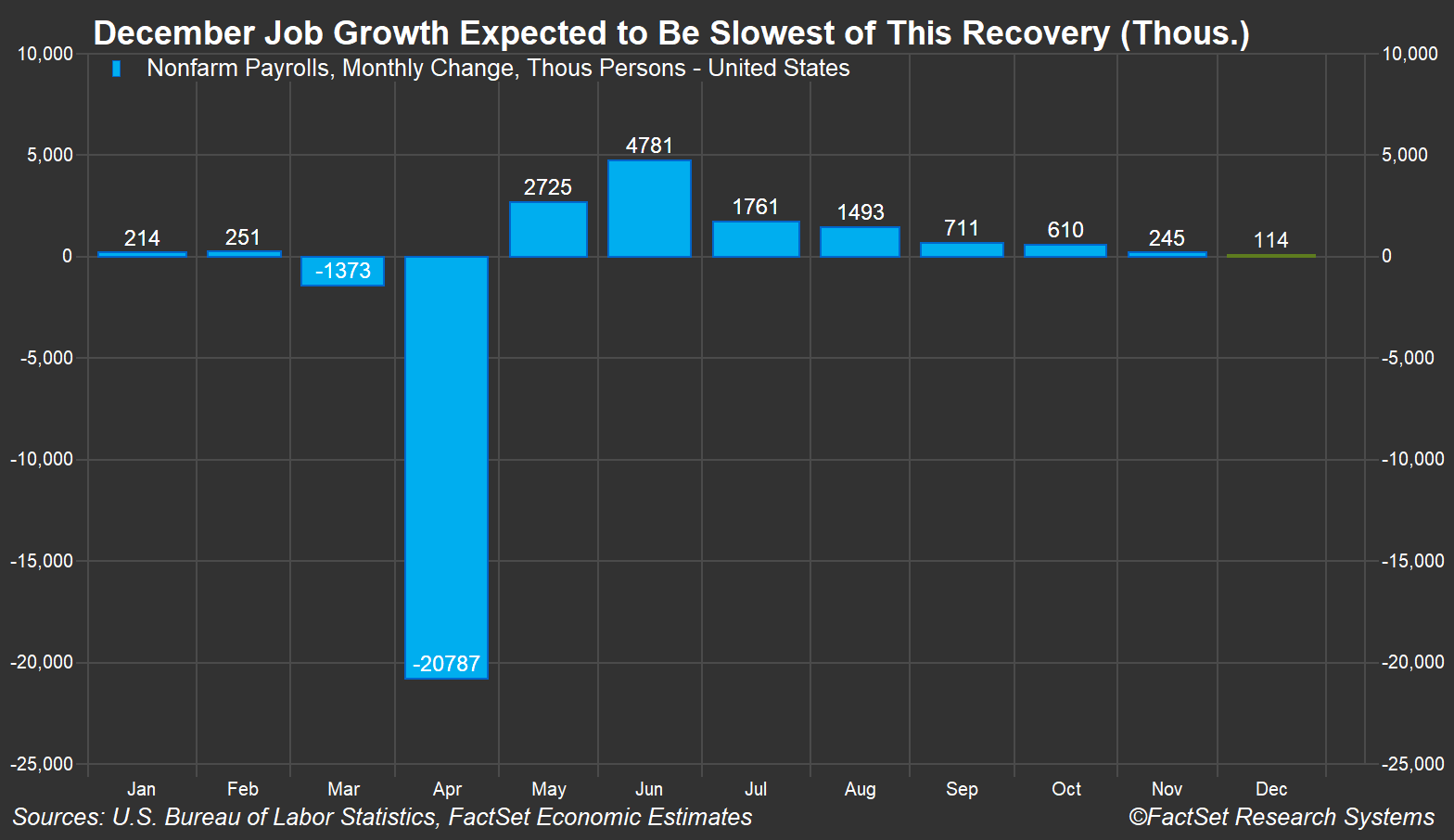 During this unprecedented economic downturn, the Federal Reserve has responded with unprecedented levels of monetary stimulus. As a result of the Fed’s actions, we’re seeing record growth in M2 money supply. Beginning in March 2020, M2 has shown double-digit year-over-year growth, peaking in November at 25.1%. Economic theory would predict that this surge in the money supply would lead to high inflation, but that is not the case; the core personal consumption expenditure (PCE) price index was up just 1.4% in November compared to a year earlier.

The key here is the velocity of money, or how often money changes hands in the economy. Data from the Federal Reserve shows that while M2 money supply growth is at record highs, M2 money velocity is at all-time lows. During tough economic times, and especially as a result of COVID-19 lockdowns, both businesses and consumers are more inclined to keep their money in the bank. The Fed’s data confirms this, with savings deposits up 19.8% year over year in November. As the economy recovers and consumption resumes, we would expect to see the velocity of money increase as consumers pull money out of savings accounts to fuel spending. That may be the shift that leads to higher inflation. 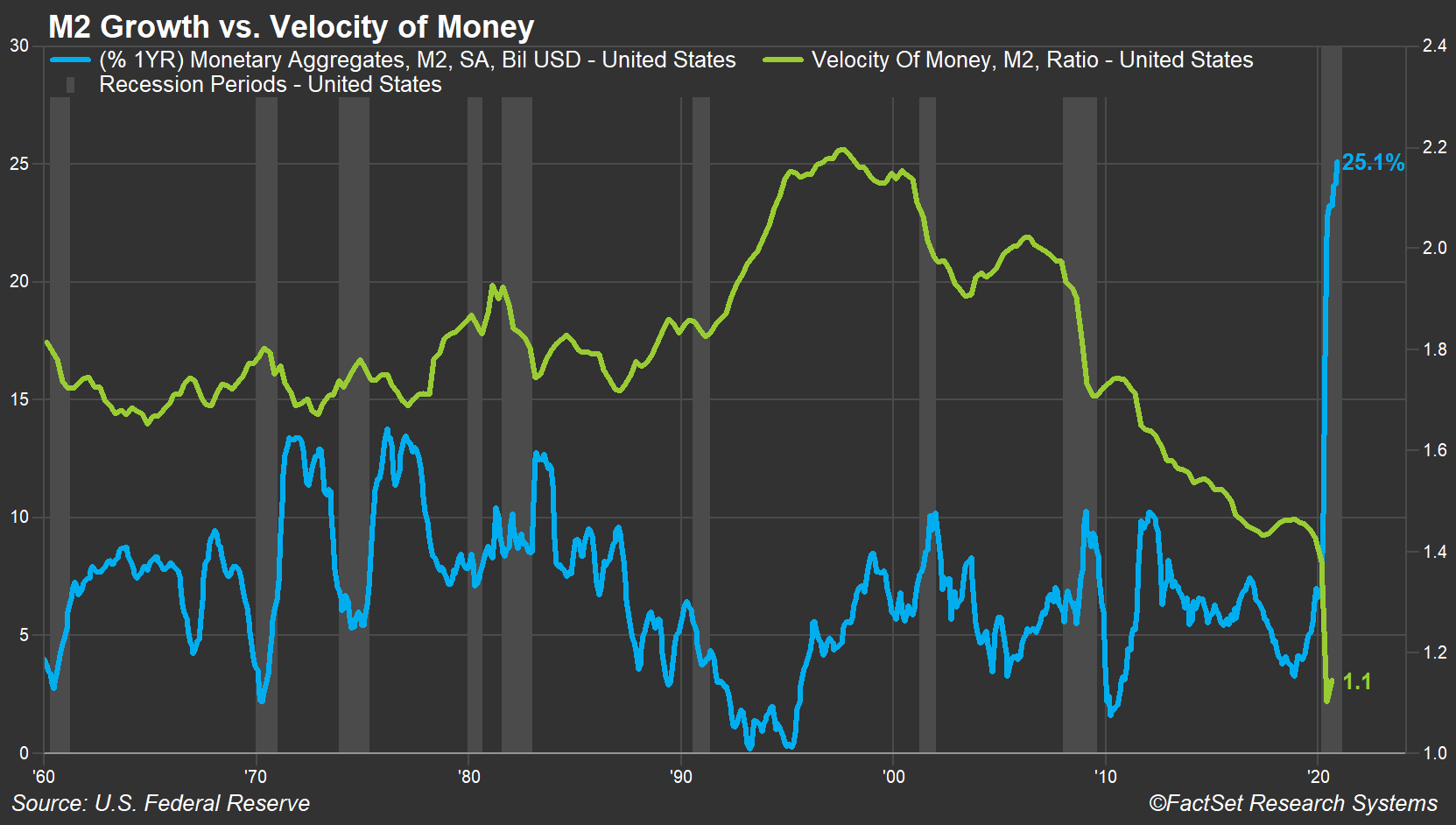 As a result of the COVID-19 pandemic, we have seen a surge in the housing market. Spurred by low interest rates and stay-at-home mandates, Americans looked to upgrade their living quarters to include better-equipped home offices, kitchens, and home gyms. While some people focused on upgrading their existing homes, we saw many people leave city apartments in favor of suburban neighborhoods and others relocating to larger homes in the same town or further afield. Not surprisingly, this high demand for houses has driven up house prices. According to the National Association of Realtors (NAR), the median selling price for existing homes for November was up 14.6% from a year earlier, following October’s 15.5% year-on-year growth. We haven’t seen growth like this since 2005, when the U.S. was at the height of the housing market bubble. The fear is that persistent high unemployment numbers could lead to a collapse in the housing market in 2021. 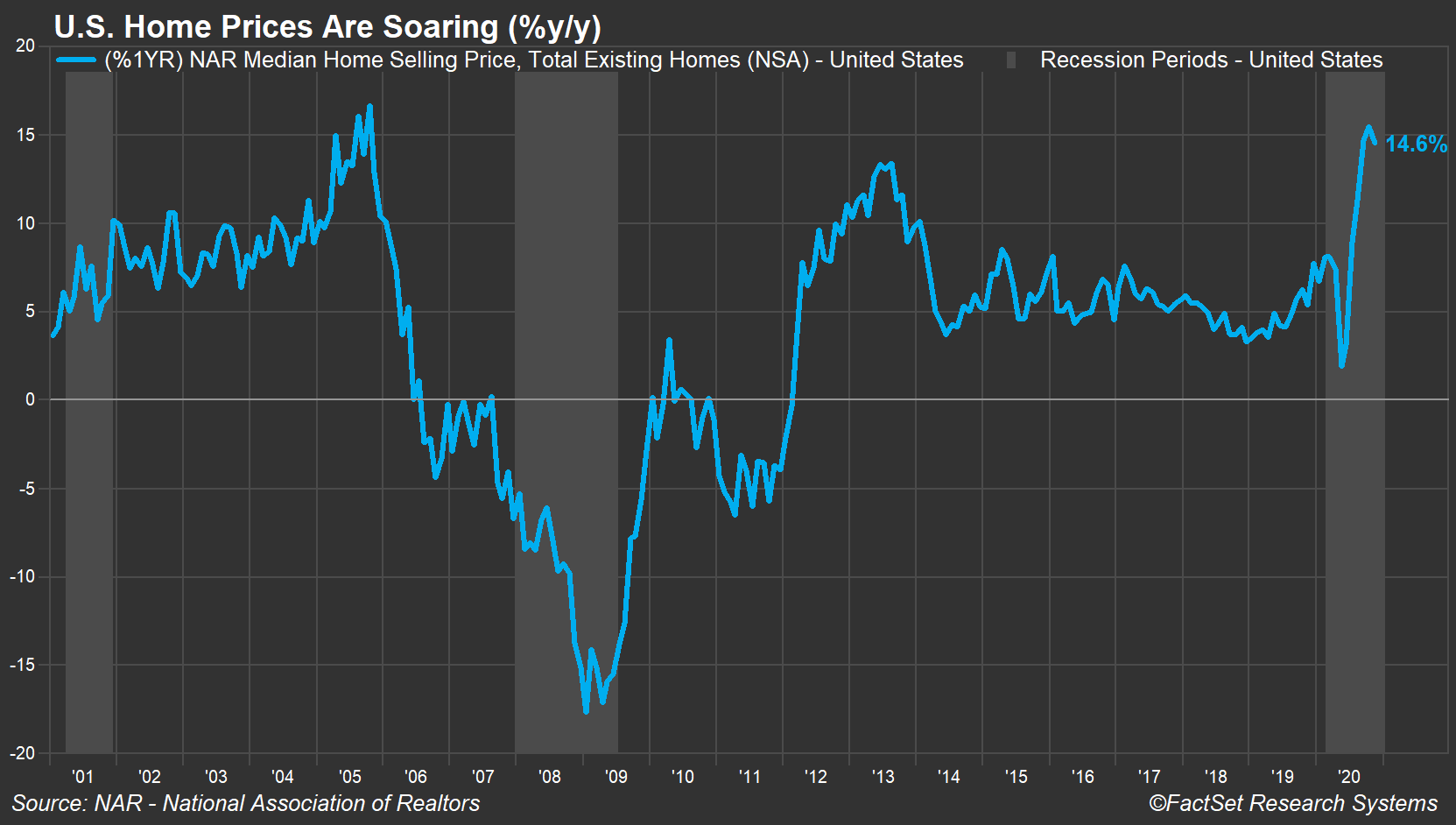