The Canadian economy appears to have rebounded strongly following the lifting of restrictions on indoor gatherings instituted in December and January to combat the COVID-19 Omicron wave. However, the strong economic growth is being accompanied by surging inflation, to which the Bank of Canada has already responded with three interest rate hikes. Policymakers continue to monitor the conflict in Ukraine and ongoing global supply chain issues to gauge the domestic impact on Canadian consumers and businesses. Here we present five charts that will guide us in tracking the Canadian economy in 2022.

Canada’s monthly GDP by industry data reflects the challenges the economy faced in the first quarter. Growth in January was downwardly revised from +0.2% to –0.2% (month-over-month change) and February growth was also revised lower, from +1.1% to +0.9%; however, the March preliminary estimate of 0.5% was revised upward to show an increase of 0.7%. Advance data indicates growth of 0.2% in April. 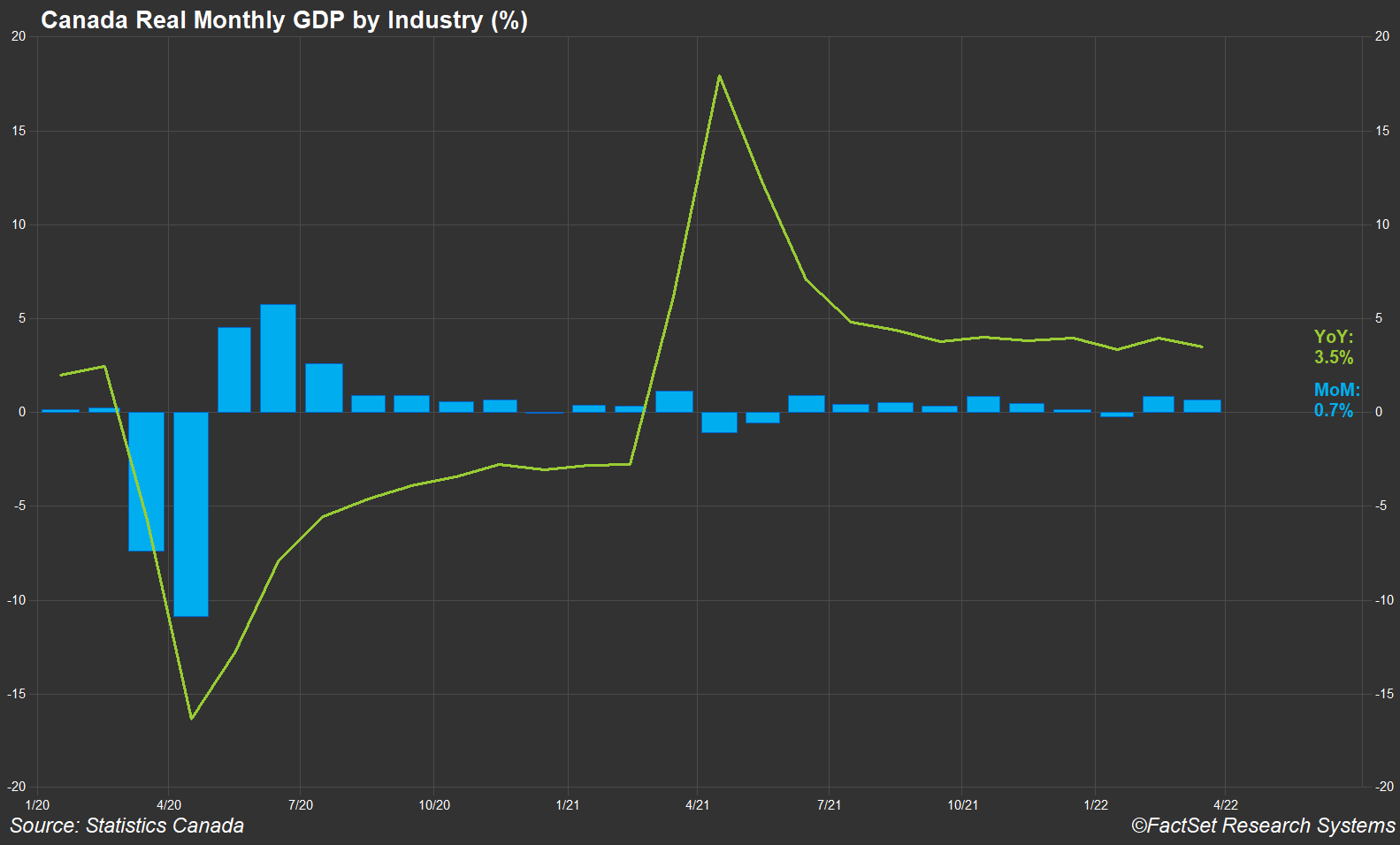 On a quarterly basis, real GDP growth slowed in the first quarter, with the economy expanding by 3.1% (quarter-over-quarter annualized rate) compared to the 6.6% growth experienced in the fourth quarter of 2021. Analysts surveyed by FactSet were expecting a growth rate of 4.9%; the slower growth was mainly due to a 9.4% decline in exports as both final consumption and gross fixed capital formation accelerated for the quarter. FactSet Estimates predict a rebound in the second quarter, with expected growth of 3.9%. For 2022, the Canadian economy is projected to expand by 3.7%.

Rising prices at the gas pump and the grocery store continue to dominate headlines as consumers face the highest inflation in 31 years. Supply chain disruptions are fueling the dramatic price increases, compounded by the ongoing conflict in Ukraine, which has led to a surge in energy and commodity prices globally. The energy component of the consumer price index (CPI) saw year-over-year growth exceeding 20% for the ninth consecutive month, jumping by 26.4% in April 2022 compared to April 2021. Higher energy prices are hitting consumers both at the gas pump and in their home-heating bills; the latter is feeding into the shelter component of CPI, which was up 7.4% year over year in April.

At the same time, Canadian consumer food prices have accelerated sharply over the last six months, rising 8.8% in April compared to a year ago. Food purchased from stores saw a 9.7% year-over-increase, the largest increase since September 1981. Overall consumer prices were up 6.8% year over year in April, moderated by slower increases in categories apart from food, energy, and shelter. 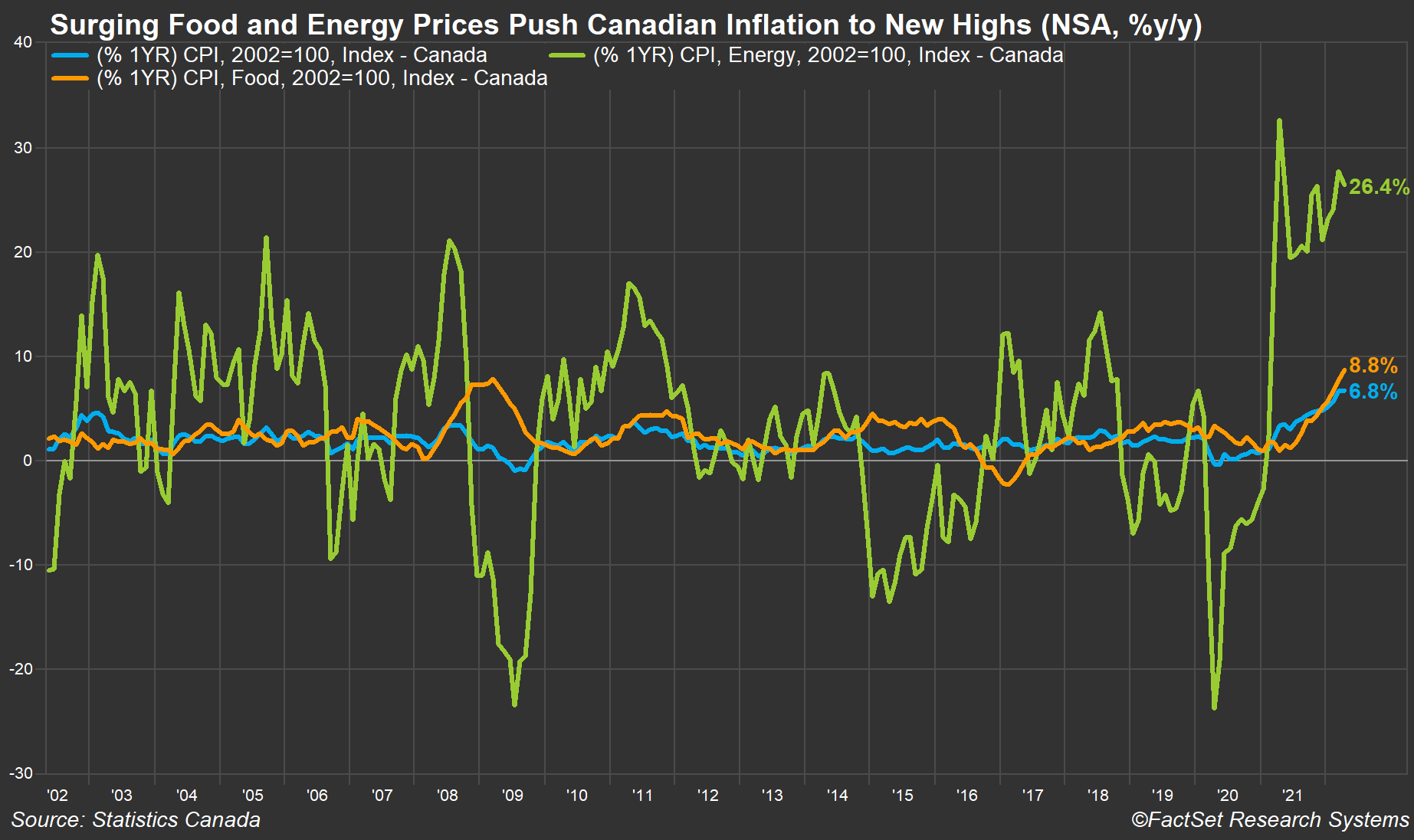 In a decision that was widely expected by market participants, the Bank of Canada raised its benchmark interest rate by 50 basis points (bps) on June 1, bringing the policy rate to 1.5%. This was the third interest rate hike of this tightening cycle and the second 50bps increase. The central bank’s policy rate is now just 25bps below its pre-pandemic level of 1.75%. Analysts surveyed by FactSet are currently projecting that the policy rate will be 2.5% by the end of the first quarter of 2023, but with real interest rates now solidly in negative territory, persistent inflation could dictate more aggressive tightening.

The Housing Market Appears to Be Cooling

Canadian home prices appear to have turned a corner, with Statistic Canada’s index of new housing prices rising 9.4% year over year in April. While this still indicates a hot housing market, this was the smallest price increase since March 2021. The Bank of Canada’s rate hikes will certainly take a bite out of the market, but observers are split on whether we will see a soft landing or a hard crash.

Surging home prices have been a factor in the deterioration of housing affordability. The Bank of Canada’s Housing Affordability Index (HAI) rose for a seventh consecutive quarter, jumping to .428 in the first quarter of 2022. This was the highest level for this index since September 1991. The HAI measures the share of disposable income needed for housing costs, which include mortgage payments and utilities. Thus, owning a home in Canada required 42.8% of a household’s disposable income in the first quarter; this compares to an average cost of 35% in the four years preceding the COVID-19 pandemic. Rising interest rates will only hurt affordability, but how much depends on what happens to the other variables in the equation, namely home prices, utility prices, and household income. 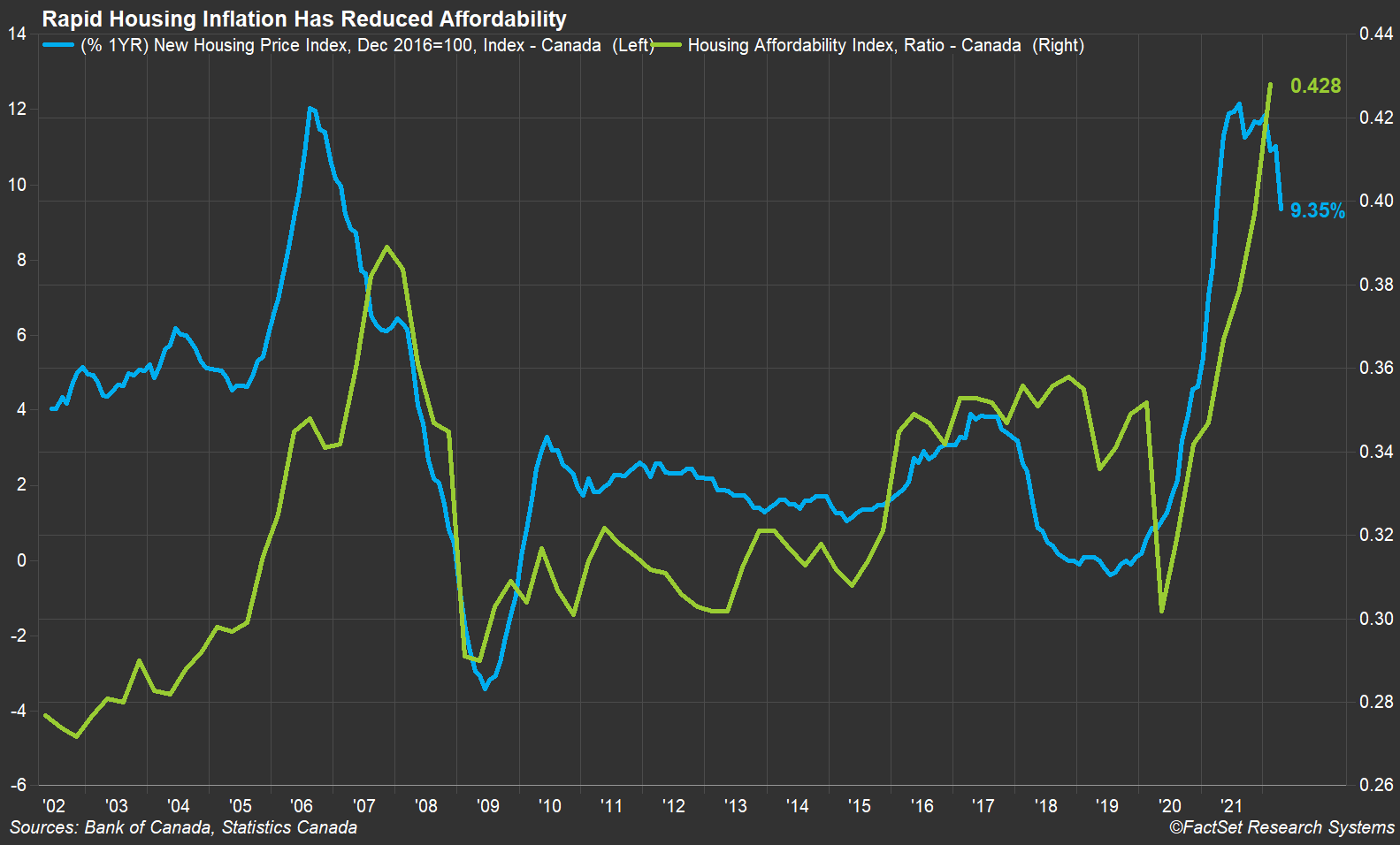 Wages Are Up Compared to a Year Ago, But Not as Much as Inflation 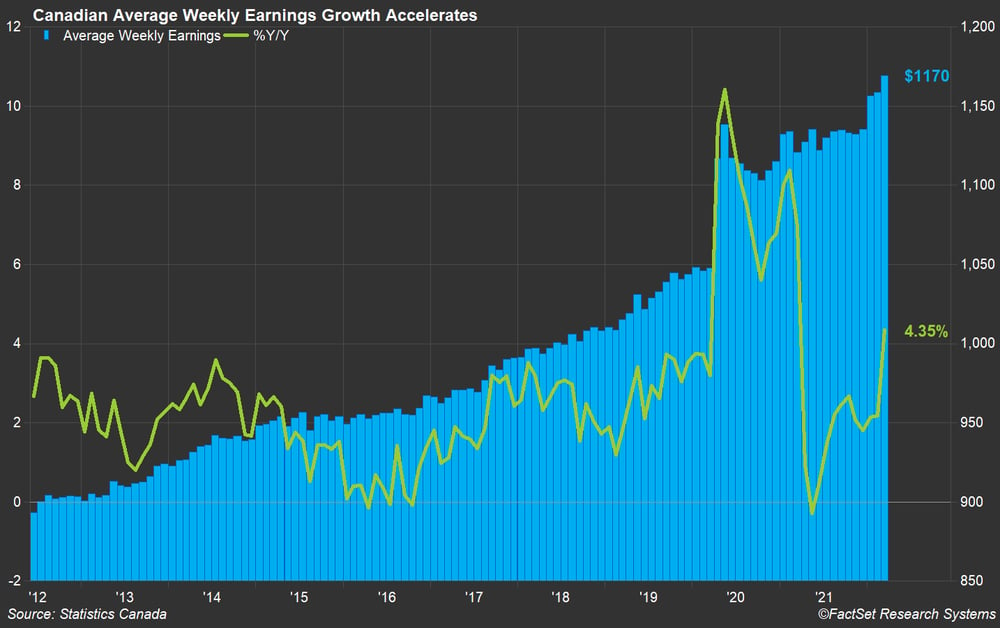 However, examining the data over a two-year horizon, right before the COVID-19 pandemic took hold, paints a different picture. Weekly earnings are up 11.6% compared to two years ago (March 2020); at the same time, the overall CPI is up 8.7% compared to its February 2020 peak. As shown in the inflation chart above, year-over-year inflation turned negative in 2020 while wages surged. In today’s tight labor market, even as consumers witness rapid price increases for specific items like food and fuel, workers are demanding and securing higher wages.