As the world continues dealing with the COVID-19 pandemic, we’ve seen a partial resumption in economic activity globally. However, the U.S. leads the world in terms of total cases and deaths, and the economic recovery is still extremely fragile. The Organization for Economic Cooperation and Development (OECD) recently released its September 2020 Economic Outlook Interim Report, in which it upwardly revised the growth forecasts for the U.S. and world. The OECD remains cautious, stressing that, “The outlook is subject to considerable uncertainty and projections are dependent on assumptions about the spread of the COVID-19 virus and policy developments.”

Let’s examine some of the data that will guide us in monitoring the U.S. economic recovery for the remainder of 2020.

The U.S. has now registered approximately 200,000 official deaths due to COVID-19 according to data from the CDC. The summer months saw an increase in daily deaths following the July 4 holiday, but the seven-day moving average of daily deaths was trending downward for August. However, with the opening of schools and universities for the fall semester, the average number of daily deaths appears to have plateaued at around 800 per day. As we enter the period of flu season and colder months across much of the country, experts fear that numbers will begin to climb again. In Europe—where the numbers were brought down dramatically in the spring—countries are now seeing an uptick in cases, although the numbers remain well below those in the U.S. 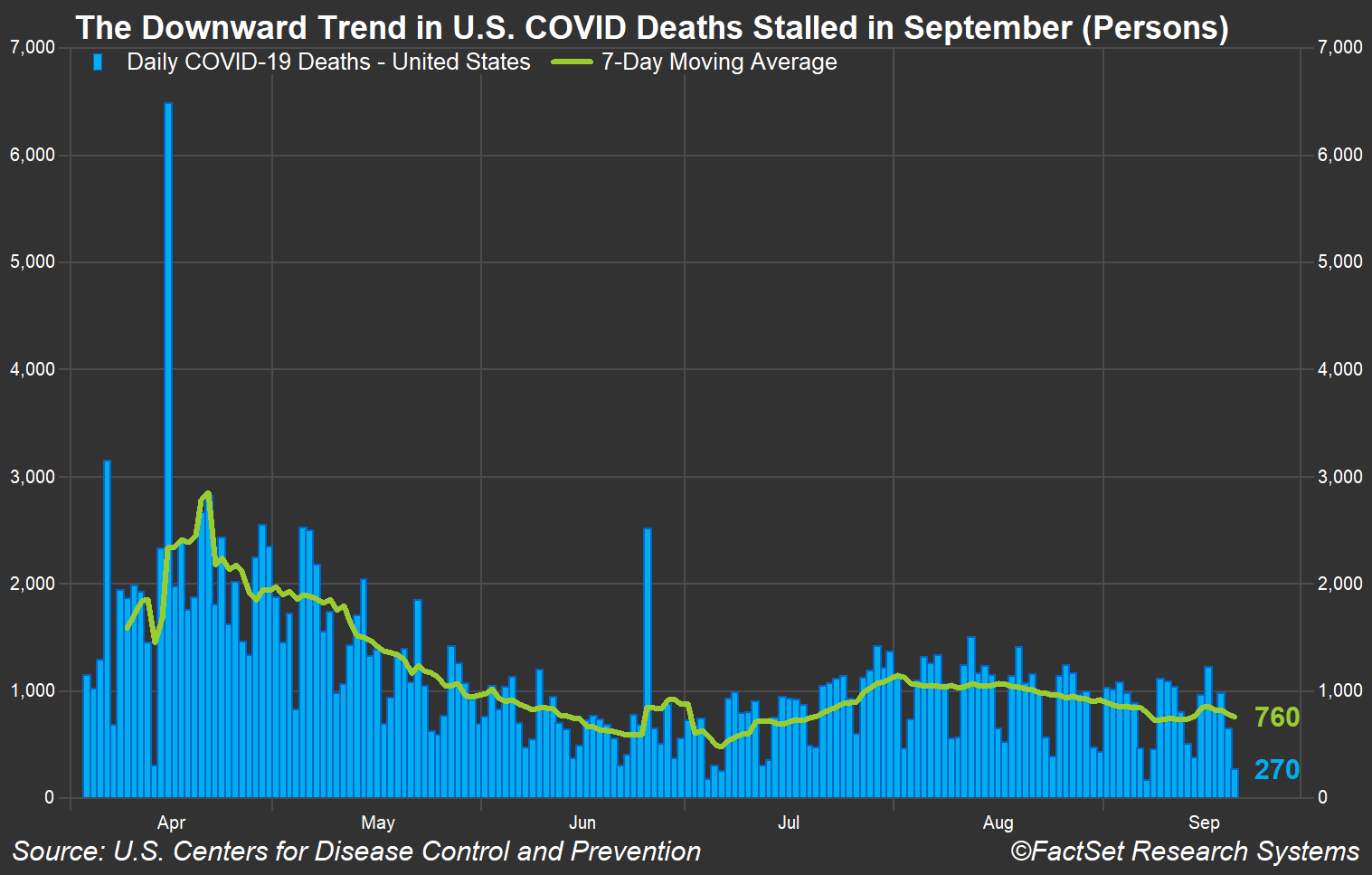 GDP Estimates Revised Higher, but Recovery Will Be Slow

In recent weeks, analysts have slightly reduced the magnitude of the expected decline in 2020 GDP; however, they have also lowered the strength of the 2021 recovery. The median of consensus forecasts compiled by FactSet projects a 5.0% decline in U.S. GDP in 2020 followed by 4.1% growth in 2021. This compares to July’s forecast for a 5.4% 2020 contraction accompanied by a 4.5% rebound in 2021. Still, the economic recovery is not projected to be robust enough to get the economy back to where it was pre-COVID until the second half of 2021. 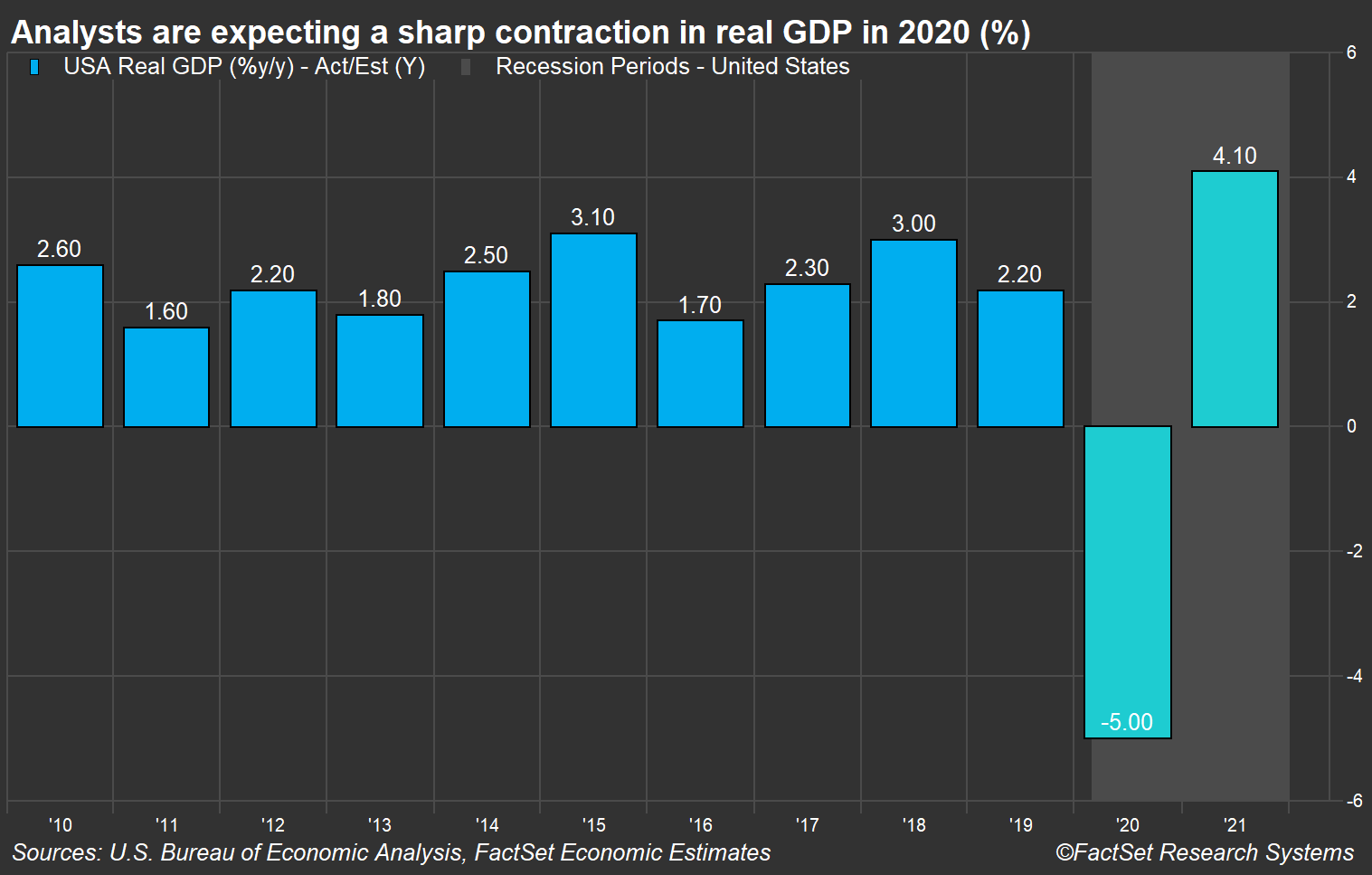 Despite the initial signs of strength seen in Q3, the failure of Congress to pass new legislation to help businesses and consumers weather the economic downturn could impede the recovery in the coming months. In addition, with the coronavirus still raging in the U.S., we are not likely to see the v-shaped recovery for which many were hoping. Slower-than-expected growth in the second half of 2020 would negatively impact 2020 annual growth and hinder the economic recovery expected in 2021.

The Current Account Deficit Jumps to a 12-Year High 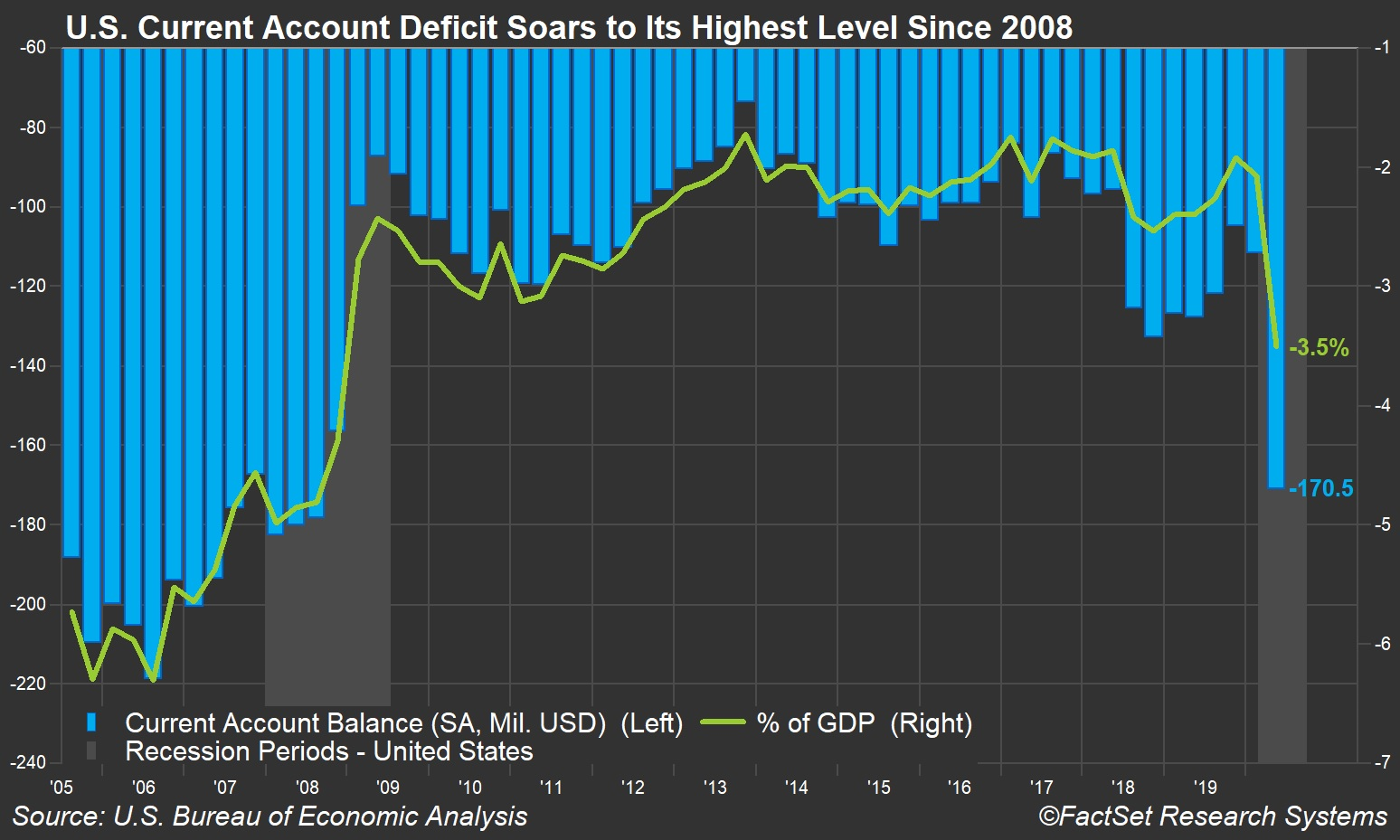 Looking ahead, the monthly data we have so far for international flows in Q3 isn’t encouraging. The U.S. Census Bureau reported earlier this month that the July trade balance of goods and services fell to -$63.6 billion, the biggest deficit since July 2008. The services balance, where the U.S. maintains a surplus, fell to its lowest level in eight years; at the same time, the goods deficit fell to an all-time low of $80.9 billion (balance of payments basis). While both exports and imports have recovered somewhat in recent months from their recent lows, exports of goods and services remained down 20.1% in July compared to a year ago while imports were off by 11.4%.

Industrial Production Increases but at a Slowing Rate

After seeing strong rebounds in activity in June and July, total industrial production rose by just 0.4% in August, below expectations for 1% growth. This was the fourth consecutive month of growth, but total output remains down 7.9% compared to a year ago (not seasonally adjusted basis). Manufacturing production rose by 1% compared to July, the fourth monthly increase in a row; however, the 1% increase was far slower than the gains seen in the previous four months. Mining production fell 2.5% for the month as Tropical Storm Marco and Hurricane Laura caused sharp but temporary drops in oil and gas extraction and well drilling. Output by utilities fell by 0.4%.

While the Institute for Supply Management’s (ISM) survey of purchasing managers showed continued expansion in manufacturing sector activity in August, the report indicates the ongoing risks and unevenness across industries. “Impacted by the current economic environment, many panelists’ companies are holding off on capital investments for the rest of 2020. In addition, (1) commercial aerospace equipment companies, (2) office furniture and commercial office building subsuppliers, and (3) companies operating in the oil and gas markets—as well as their supporting supply bases—are and will continue to be impacted due to low demand.”

Inflation and the Fed

In August, Federal Reserve Chairman Jerome Powell announced a change to the inflation-targeting framework of the Federal Open Market Committee (FOMC). He presented the shift at the Fed’s annual symposium held in Jackson Hole, Wyoming. While the FOMC will continue to target inflation of 2% over the longer run, the new statement indicates that the committee will seek to achieve inflation averaging 2% over time. “Therefore, following periods when inflation has been running below two percent, appropriate monetary policy will likely aim to achieve inflation moderately above two percent for some time.”

This change officially went into effect in mid-September with the release of the Fed’s FOMC statement. The Fed’s latest economic projections released with the policy statement show inflation, as measured by PCE and core PCE, remaining bounded below 2% through 2023. This means that we’re likely to see a continuation of near-zero interest rates for the foreseeable future.