Even as COVID-19 vaccination rates continue to rise across Europe, countries in the region are seeing an increase in new cases due to the highly contagious Delta variant. While struggling to avoid reinstating lockdown measures, some countries are introducing or considering health passes that would require citizens to show proof of vaccination or a recent negative COVID-19 test before traveling or participating in many daily activities in public settings. As these events continue to shape the economic outlook, let’s examine some of the data that will guide us in monitoring the European economies in 2021.

GDP Rebounds in the Second Quarter

Eurostat’s preliminary flash estimate of GDP growth showed that Eurozone real GDP grew by 2.0% in the second quarter compared to the previous quarter. This follows two consecutive quarters of economic contractions as countries reinstated lockdowns to combat renewed surges in COVID-19 infections. Second-quarter GDP was up 13.7% compared to a year ago but remains 3.0% below the peak seen in the fourth quarter of 2019. Germany and France, the region’s two largest economies, underperformed with quarterly growth of just 1.5% and 0.9%, respectively. The next two biggest economies, hard-hit Italy and Spain, saw strong growth for the quarter, expanding by 2.7% and 2.8%, respectively. 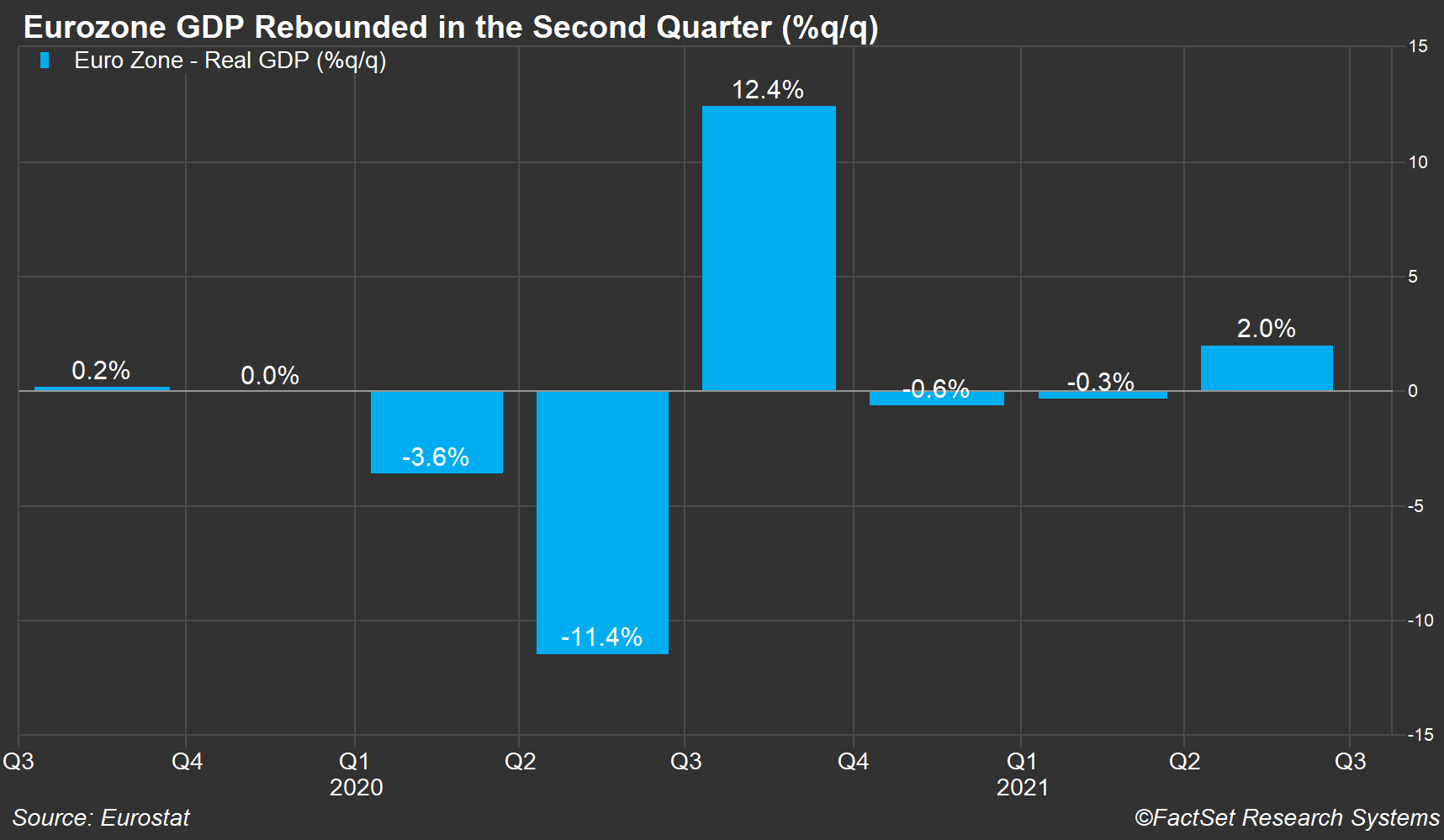 Renewed economic activity is leading to an acceleration in Eurozone inflation. Harmonized consumer price inflation accelerated to 2.2% (year-over-year) in July according to Eurostat’s flash estimate; this was above the European Central Bank’s (ECB’s) inflation target of 2%. However, core inflation which excludes energy and unprocessed food, rose just 0.9%. Energy prices were the main driver of overall inflation, rising 14.1% year over year. The ECB recently announced a shift to a symmetric 2% inflation target, indicating the likelihood of a “transitory period in which inflation is moderately above target.” This language is very similar to the shift announced by the Federal Reserve in 2020, stating the Federal Open Market Committee (FOMC) goal of achieving “inflation that averages 2 percent over time.” 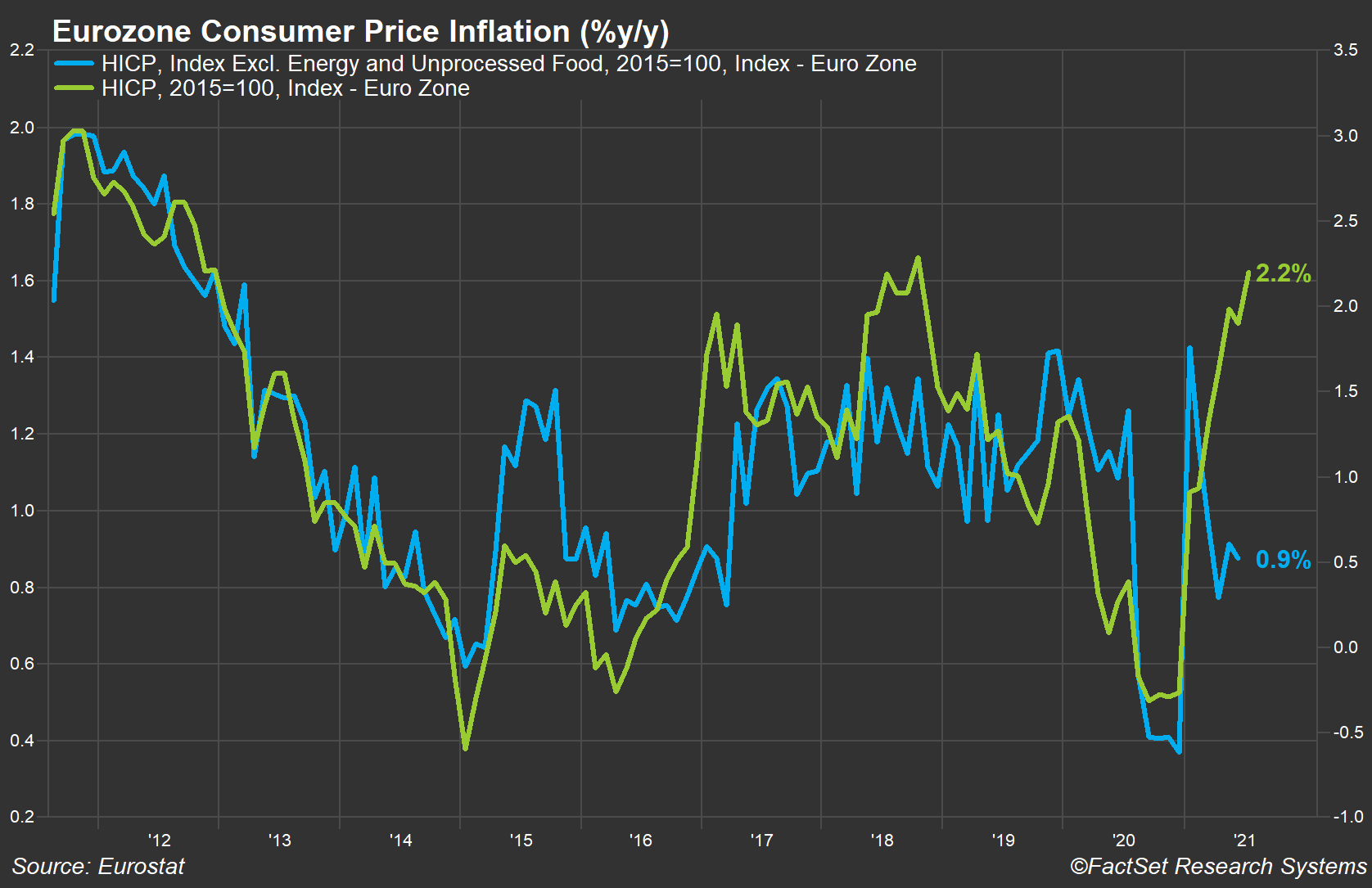 Supply chain problems, particularly the global shortage of semiconductors, are hurting Germany’s motor vehicle industry. Europe’s biggest motor vehicle producing country, Germany, produced 246,600 passenger cars in July, a 25% drop compared to a year ago according to Verband der Automobilindustrie (VDA), Germany’s automotive industry association. VDA data shows that while German passenger car production for the first seven months of 2021 increased 8.3% compared to 2020, year-to-date output is down more than 30% compared to the first seven months of 2019. The seasonally adjusted industrial production index for vehicle manufacturing shows a steady decline in the first six months of 2021; the June index reading was down 7.1% compared to a year ago and down 29.2% compared to June 2019. The lack of available supply appears to be pushing up motor vehicle prices; Eurostat’s harmonized consumer price index for German motor vehicle purchases showed a year-over-year price increase of 3.2% in June, compared to an overall inflation rate of 2.1%. 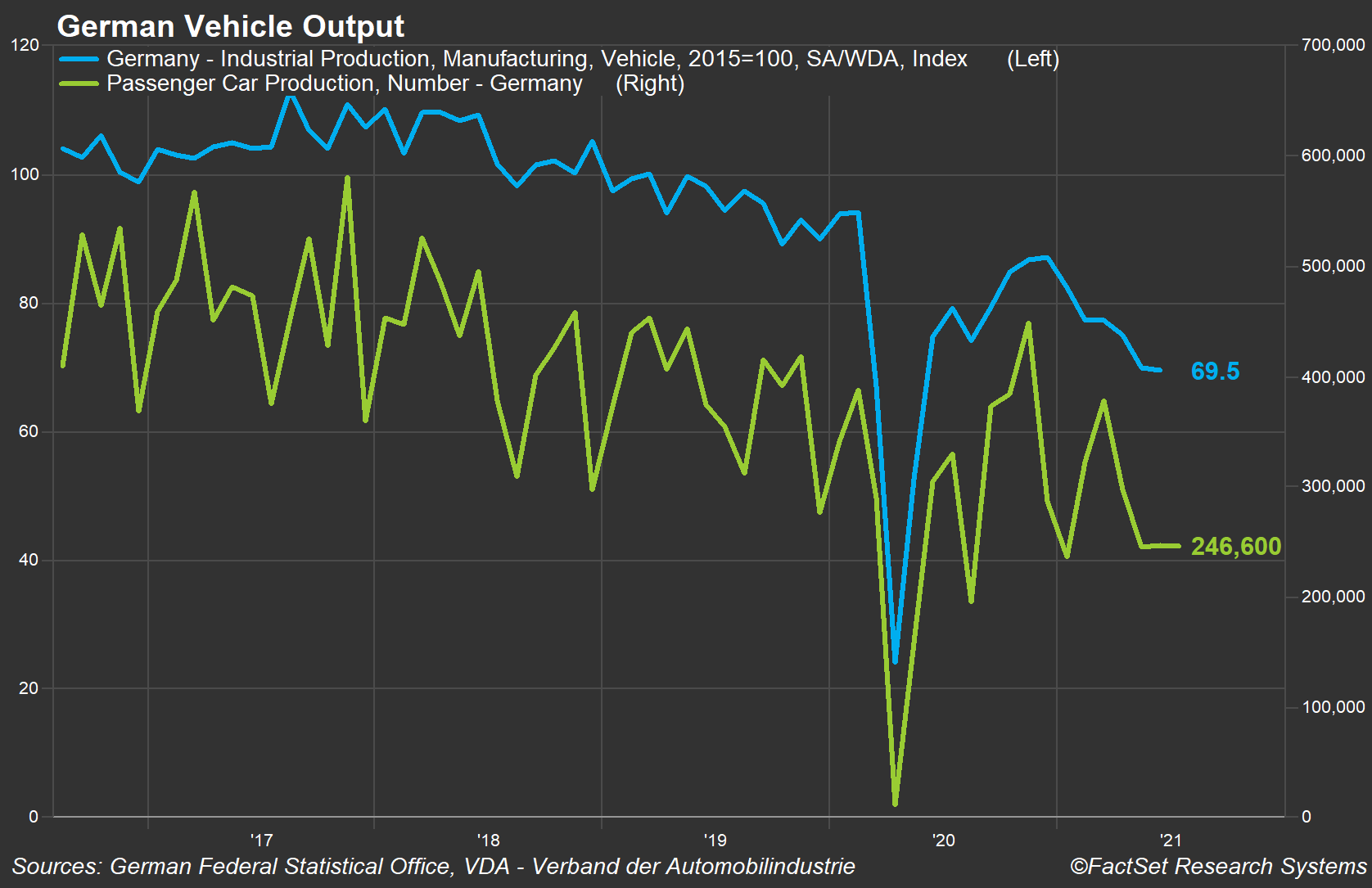 European consumer sentiment readings jumped sharply in the first two quarters of 2021 as people began to feel more optimistic about their economies reopening. For the Eurozone as a whole, the July reading from Eurostat of -4.4 (balance is the percentage point difference between positive and negative responses) is above pre-pandemic levels and the historic series average of -10.0. However, the picture is mixed when looking at the individual member countries. For more than half of the Eurozone countries, the July readings were below their pre-pandemic peaks, which was February 2020 nearly universally. The lowest readings were in Greece (-32.9) and Cyprus (-22.8), while the highest readings were in Malta (3.8) and Finland (3.3). Among the four largest economies in the region, Italy has shown the most dramatic turnaround. After years of economic stagnation and being the epicenter of the pandemic in Europe early on, the July consumer confidence reading for Italy was among the country’s highest readings on record. Overall, the optimism among consumers bodes well for economic growth in the second half of 2021, although the economic impact of the Delta variant remains a risk to the outlook. 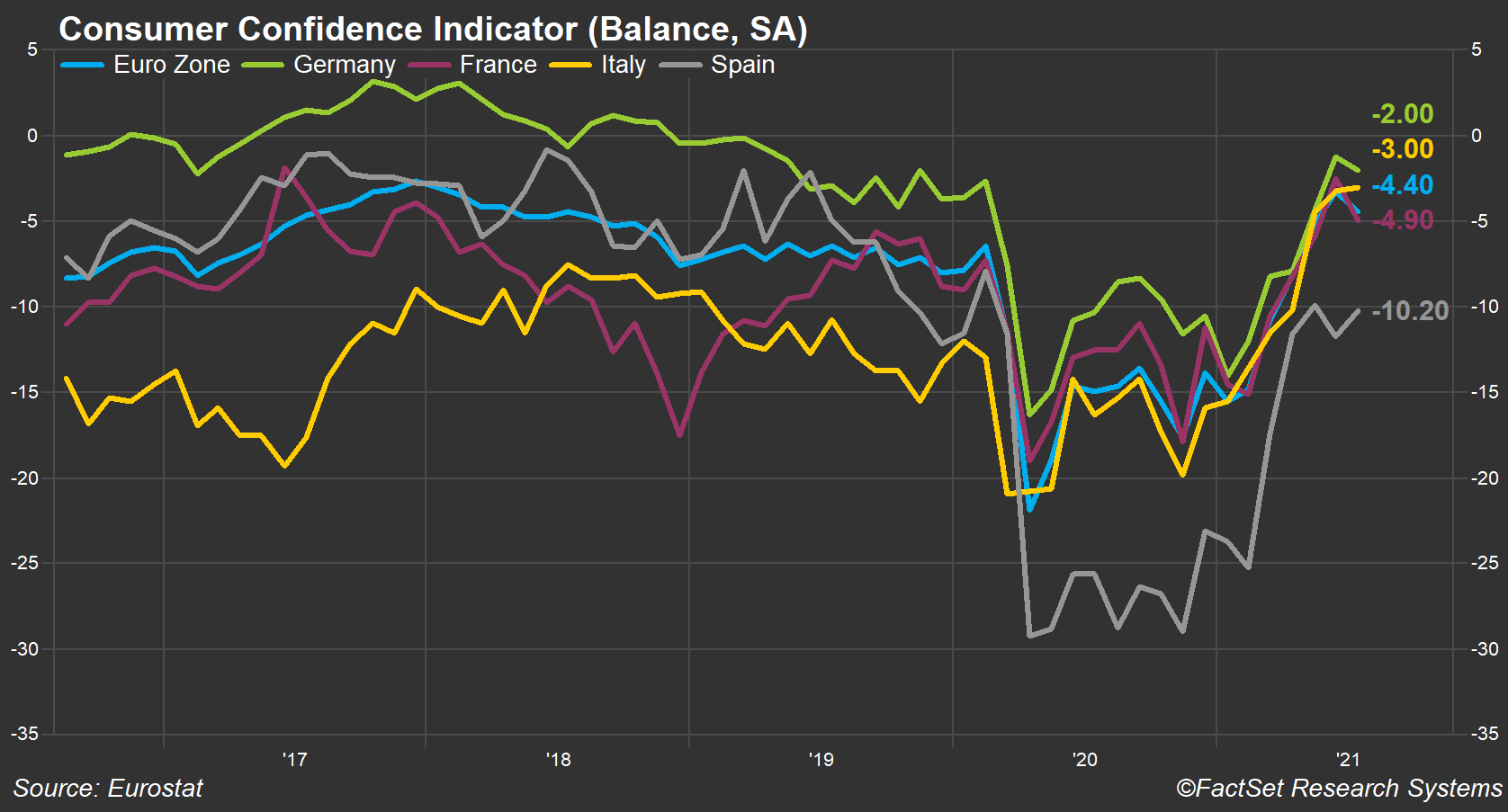 UK consumer prices jumped 2.5% in June compared to a year earlier, following a 2.1% year-over-year increase in May. Increases in the prices of transportation, household goods, and clothing and footwear led the rise as economic activity partially resumed following lockdowns. The Bank of England (BoE) expects inflation to surge even higher in the coming months, to a peak of 4.0%, before retreating to the bank’s target level of 2.0% in 2023. Echoing language from both the ECB and the U.S. Federal Reserve, the BoE reiterated this month that they “expect above-target inflation to be temporary.” Accordingly, this month the bank kept interest rates and government bond purchases unchanged. 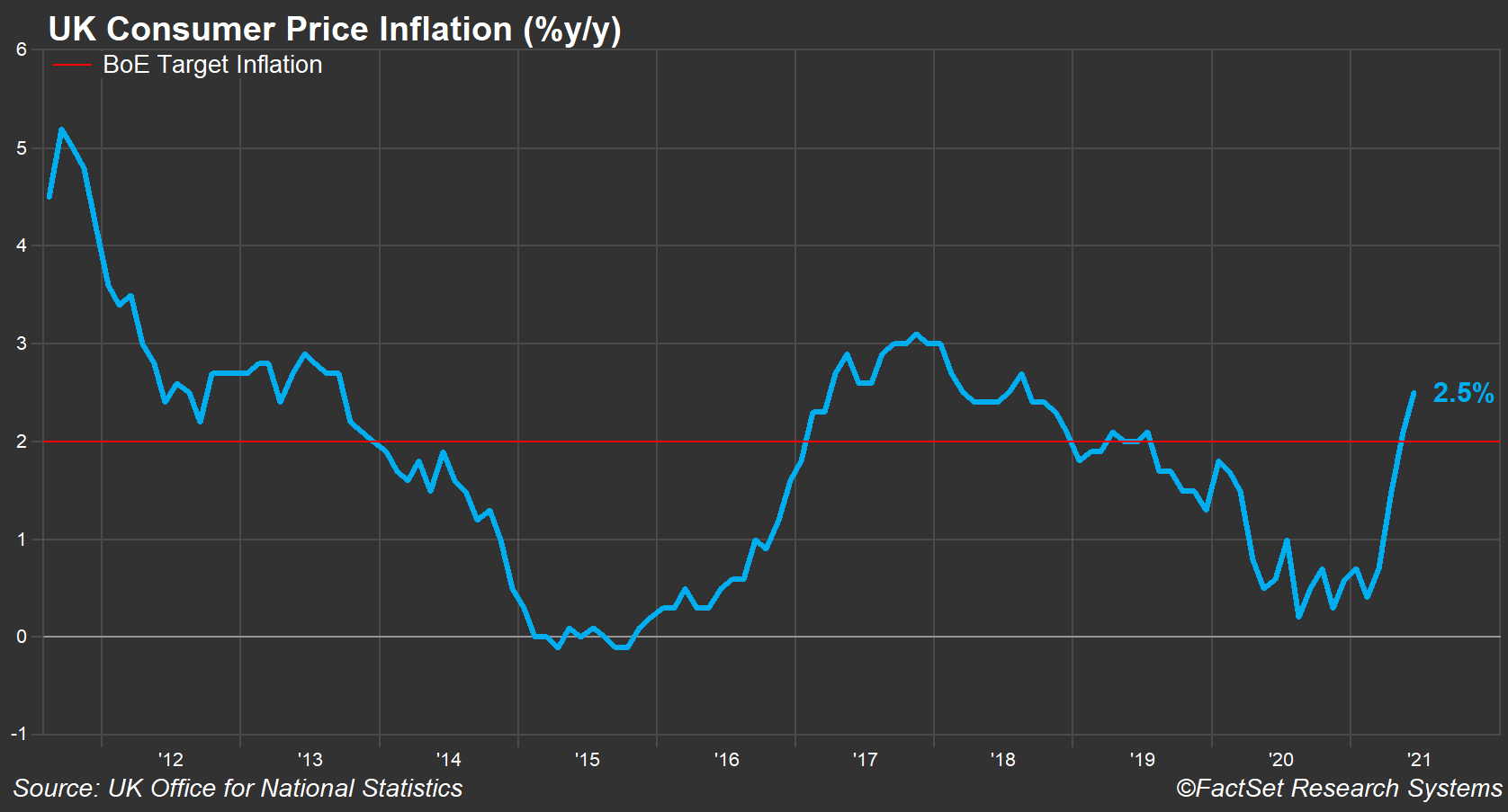 High natural gas prices in Europe have allowed other forms of energy, namely coal, to become more economical this summer.

Here we present five charts that will guide us in tracking the Canadian economy in the second half of 2021.