As we come to the end of 2019, what economic data describes the current state of the U.S. economy?

There Are Not Enough People to Fill Available Jobs

With the unemployment rate at a 50-year low of 3.5%, the labor market is extremely tight. For the first time in the 19-year history of the Job Openings and Labor Turnover Survey (JOLTS), job openings exceed the number of unemployed. Yet wage growth is slowing; after peaking at 3.4% y/y in February 2019, average hourly earnings grew by just 3.1% in November. The good news is that a dip in inflation this year has boosted real wages by the most in three years; year-to-date real average hourly earnings are up 1.3% from last year compared to growth of just 0.5% in 2018. 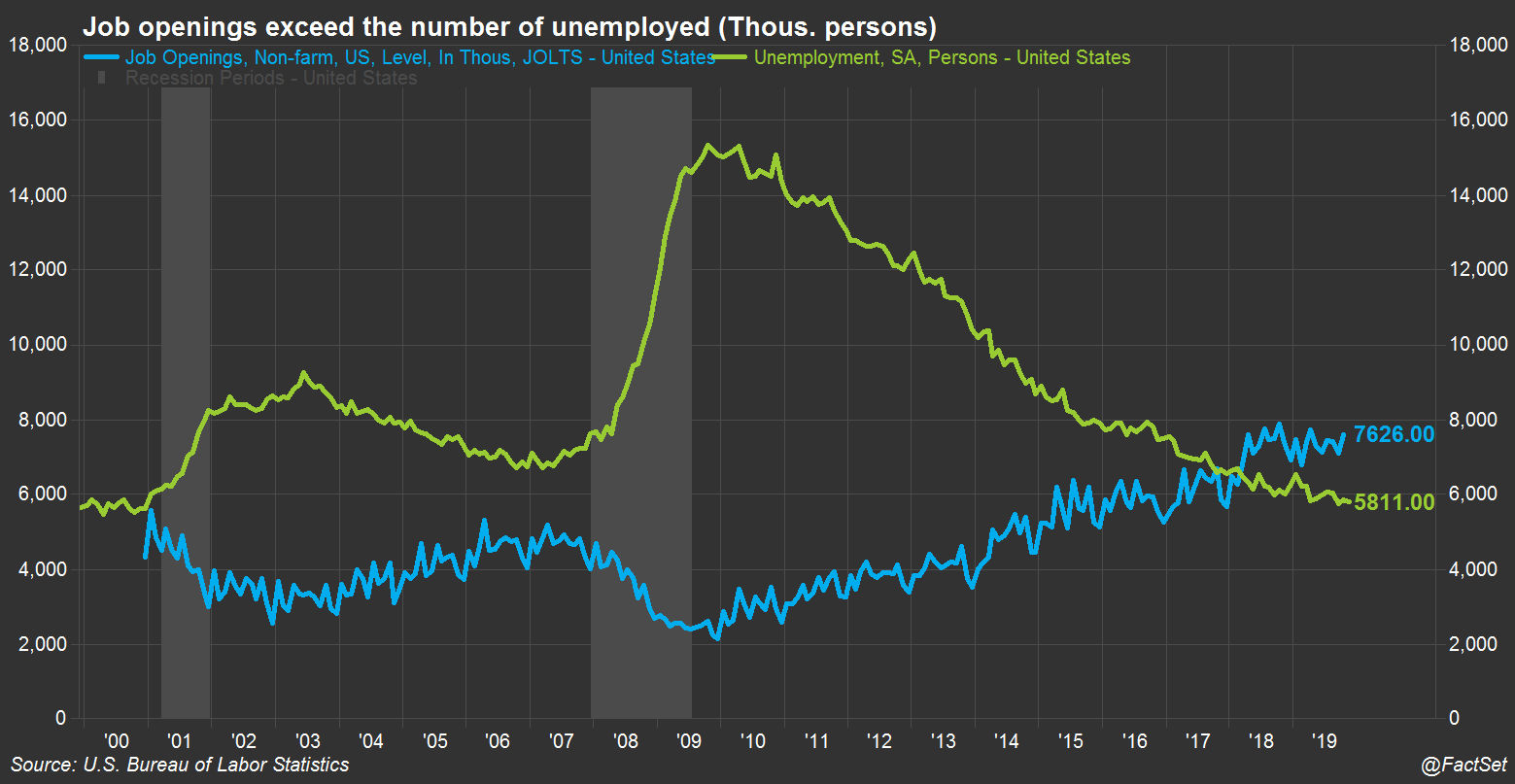 The U.S. Manufacturing Sector Remains Weak, Employment May Have Peaked

The ongoing U.S.-China trade war has taken its toll on global manufacturing. U.S. manufacturing production was down 0.8% last month compared to November 2018, although factory output got a boost following the end of the General Motors strike, jumping 1.1% from October. At the same time, manufacturing jobs have continued to grow (excluding October’s strike-induced dip), reaching an expansion high of 12.865 million in November. However, the trajectory of factory jobs appears to have flattened out with November manufacturing employment up just 0.6% from a year ago. 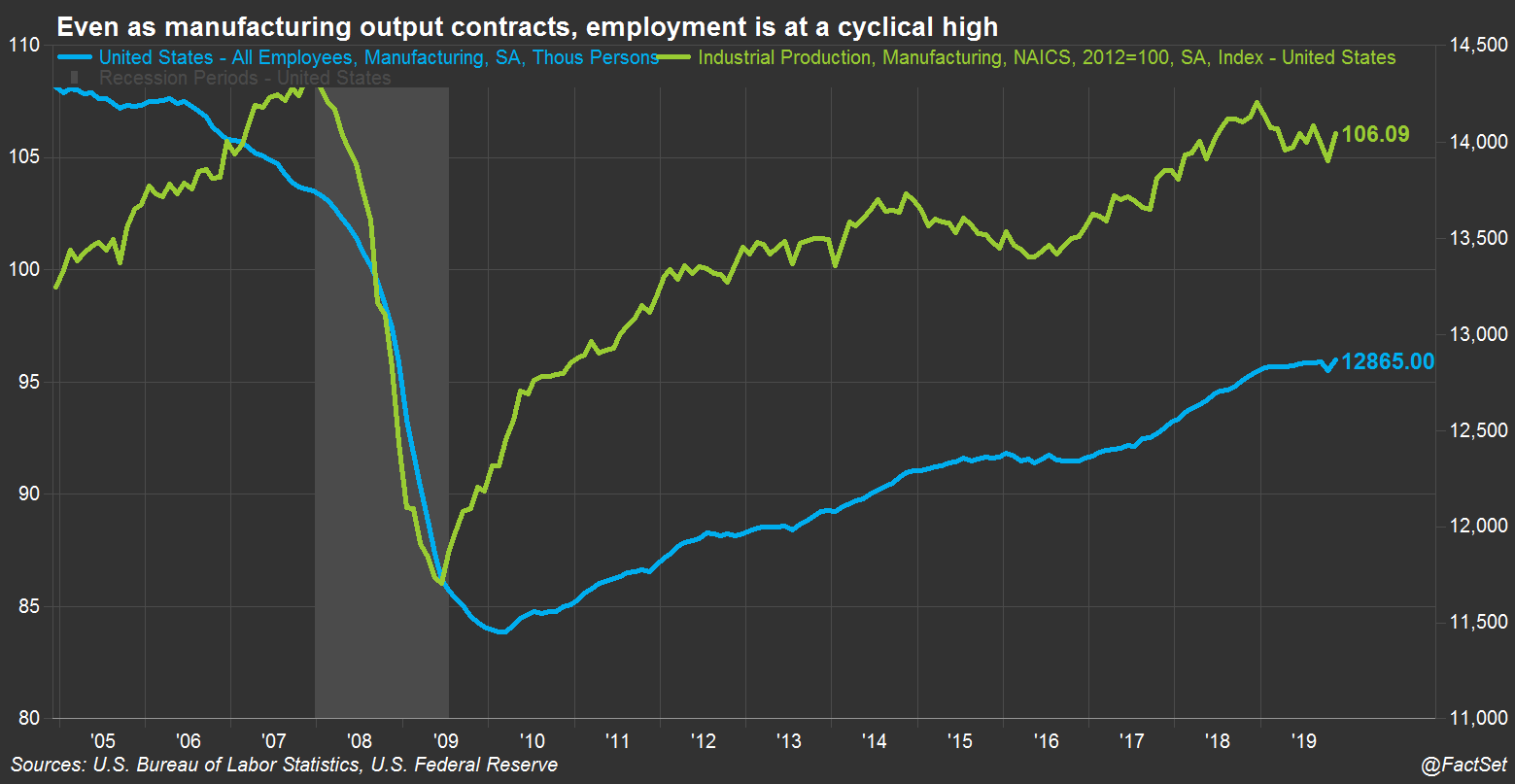 The housing market is getting a boost as a result of the Fed’s three interest rate cuts this year. The NAHB/Wells Fargo Housing Market Index, which measures the confidence of U.S. home builders, surged to 76 in December—its highest reading since June 1999. November housing starts came in at 1.365 million units, a 3.2% increase over the previous month and well above the 1.34 million expected by analysts surveyed by FactSet. The consensus estimate for the annual 2019 value is currently 1.26 million; this would make 2019 the strongest year for starts since 2007. 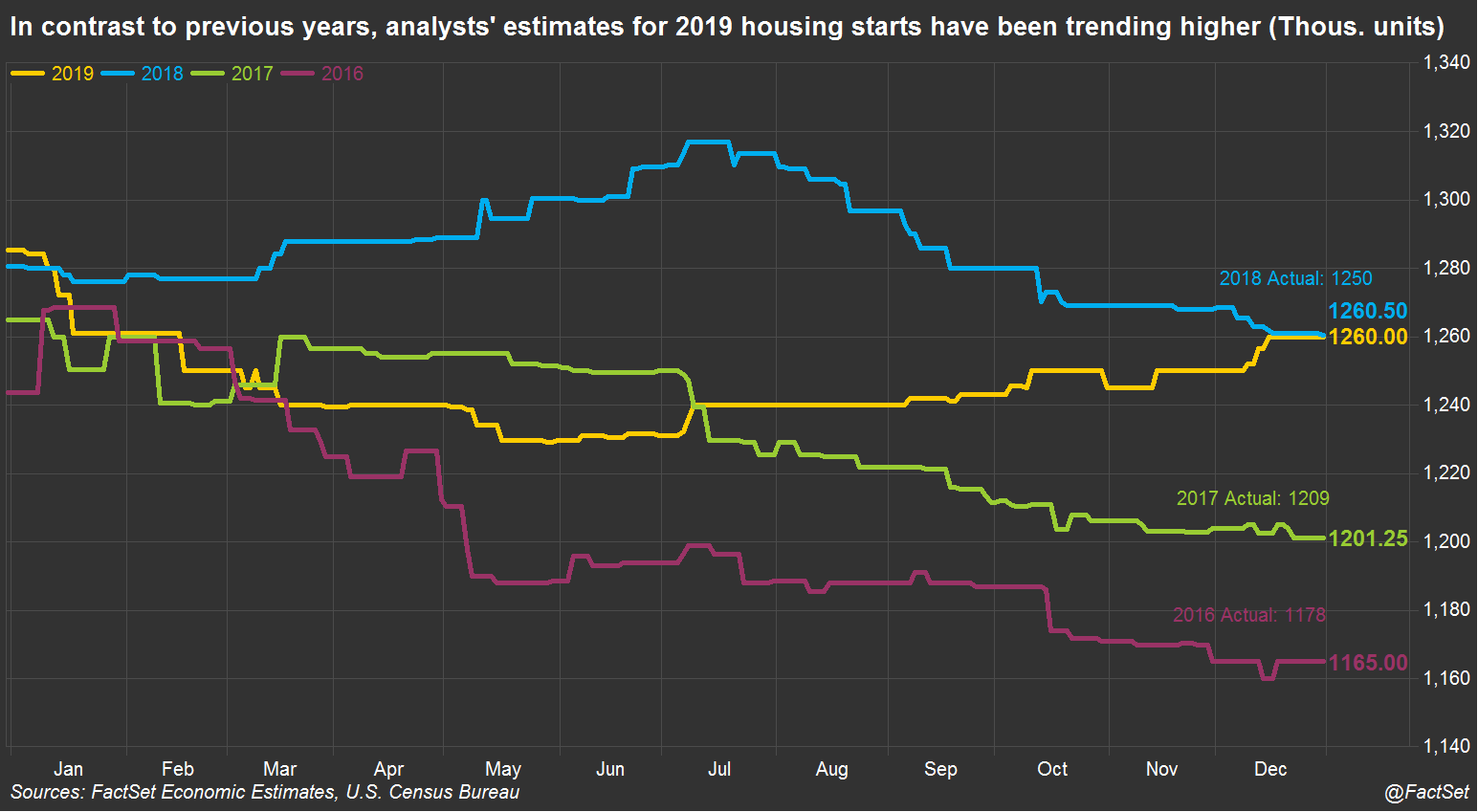 Businesses Have Taken on Large Amounts of Debt

The surge in consumer debt, especially in subprime mortgages, was one of the key factors that led to the 2007-08 financial crisis. Since then, consumers have reined in their borrowing but now the rise in debt owed by U.S. businesses is a growing concern. In fact, the Federal Reserve flagged this trend as one potential risk in the financial system in its latest Financial Stability Report. As a result of the continued low-interest rate environment following the last recession, businesses have allowed their debt levels to grow rapidly, outpacing the growth of nominal GDP. Not only is the credit-to-GDP ratio of the business sector at historically high levels, but there are growing concerns about the quality of some of this debt. 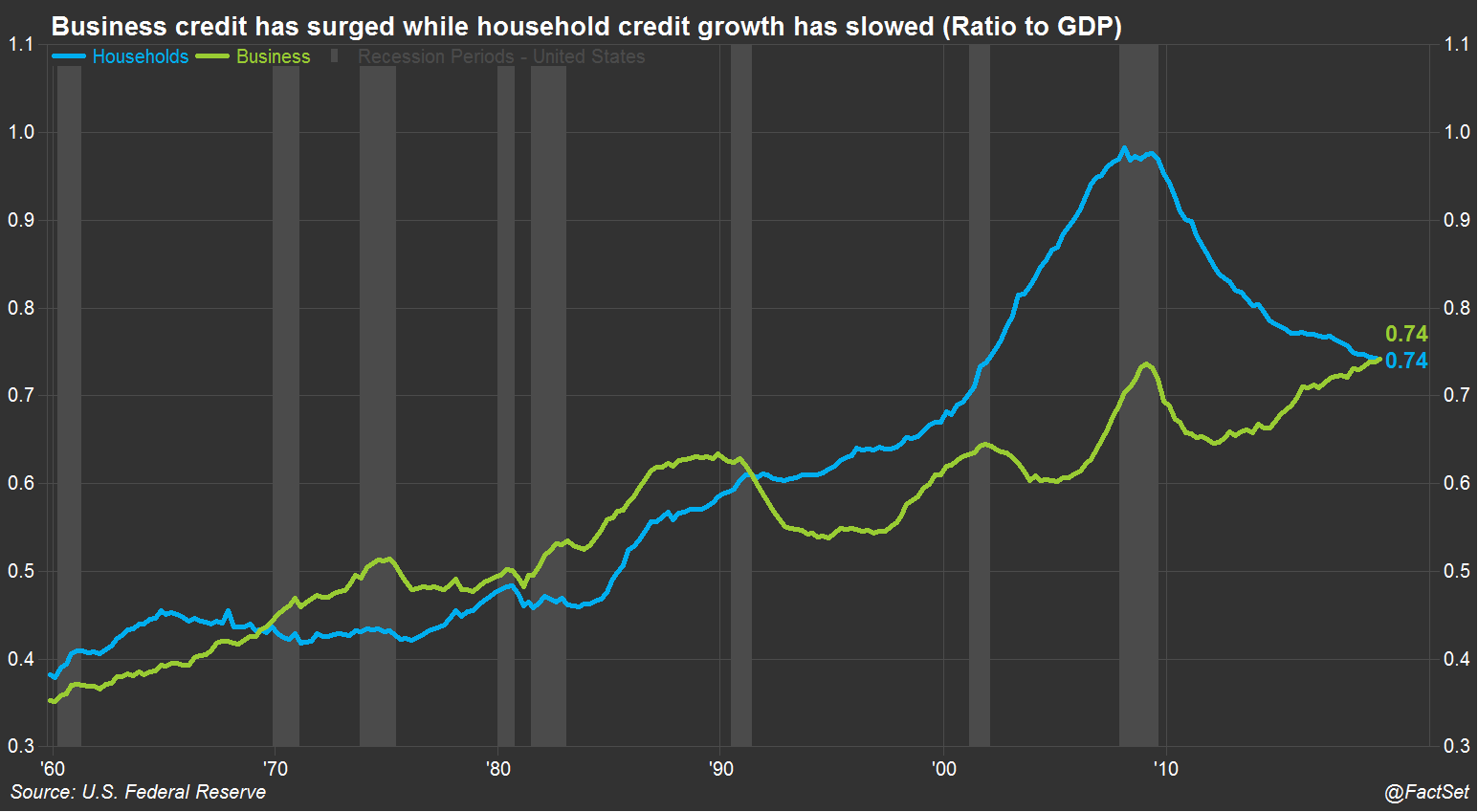 The U.S. Department of Treasury reported that the federal budget deficit surged by $205 billion in fiscal year 2019 to $984 billion, the largest deficit since 2012. In 2020, the deficit is projected to exceed $1 trillion. The increases we are seeing in the deficit are unprecedented for a period of peacetime economic expansion. Normally, deficits swell during recessions as revenue declines and the use of public safety nets increases in response to higher unemployment. However, the 2017 tax cuts reduced revenue, a shortfall that has not been recouped with stronger economic growth. With the current economic expansion now in its 11th year and growth expected to continue to slow into 2020, the budget deficit is projected to continue to grow. 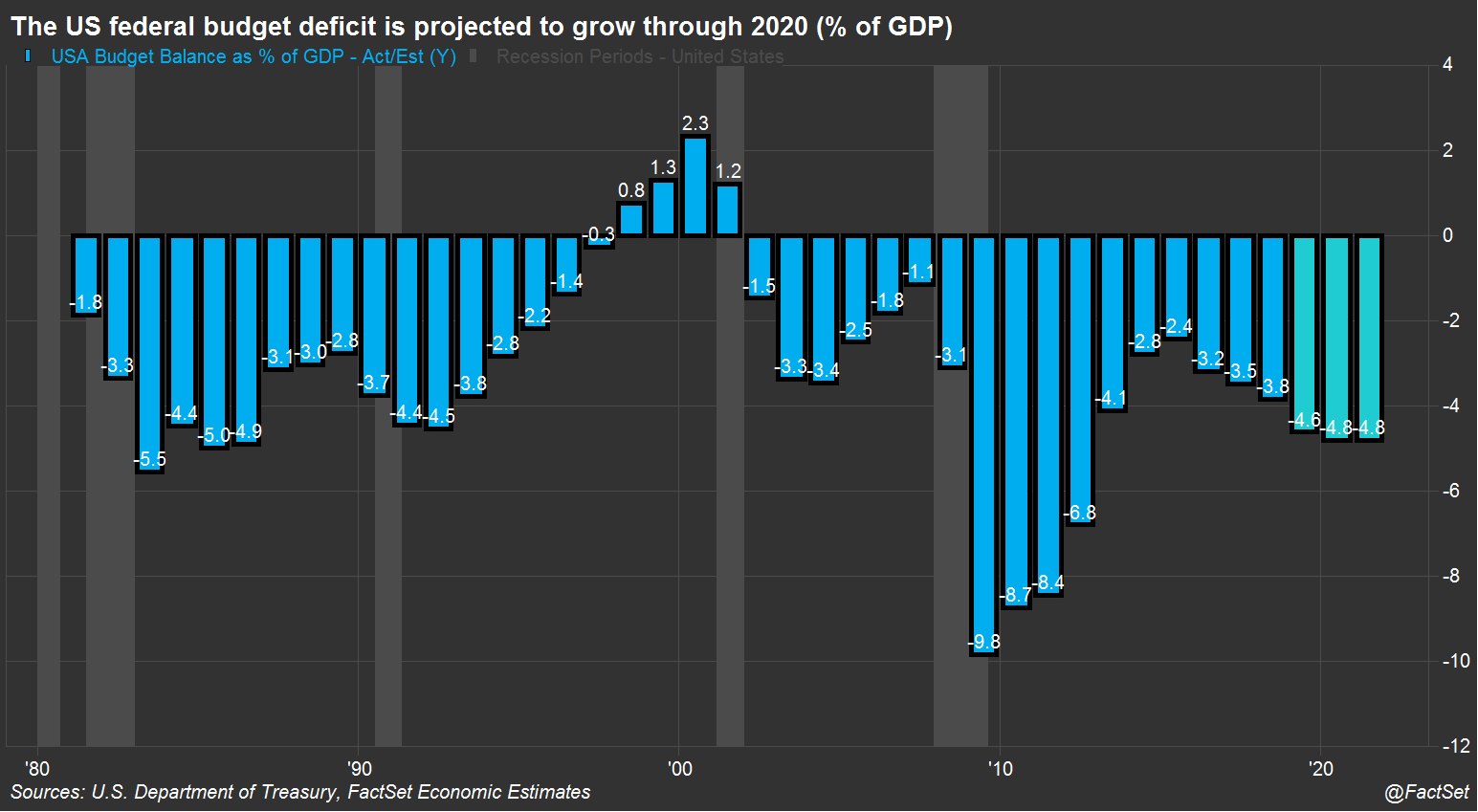