The United States is the world’s largest consumer of oil. While domestic production has increased recently, imports still account for approximately 50% of consumption in volume terms. Production and consumption statistics from the U.S. Energy Information Administration (EIA) and OPEC provide a strong foundation for aggregate analysis, but this data is often only available at low frequencies, has long lags, and is generally not associated with individual companies, making it difficult to assess the impact of changes in real time. 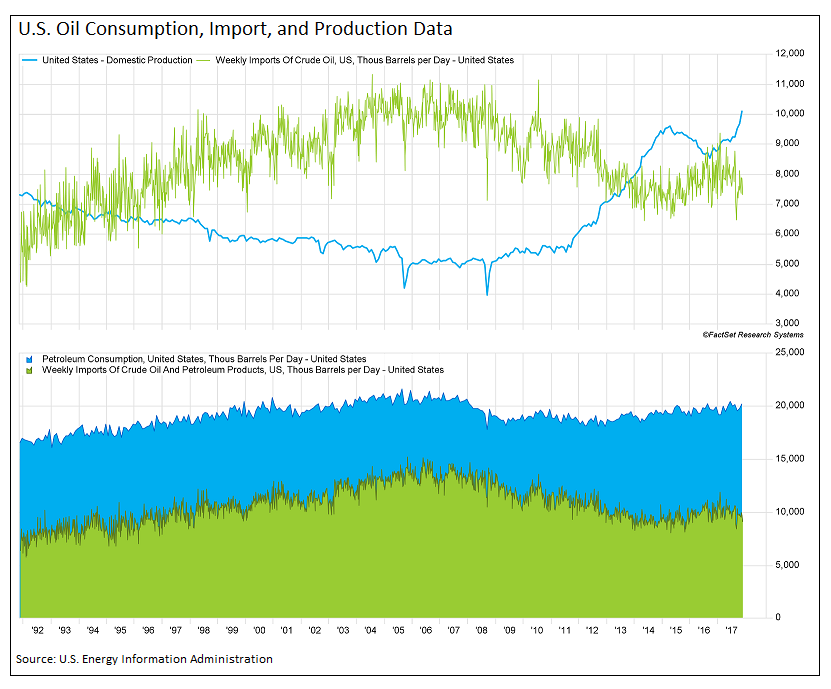 A Unique Perspective on Country Flows

To gain insight into transactions associated with individual companies, we can leverage maritime shipping transactions data from U.S. Customs and Border Patrol (CBP). Using bills of lading for 200 U.S. ports and 1,000 non-U.S. ports, this data includes cargo content descriptions, departure and arrival ports, and shipper/consignee relationships associated with maritime freight traffic subject to tracking or taxation by the CBP. By mapping this detailed shipping data to global entity data, we can aggregate import data at a higher frequency and analyze company-specific supply chains and business partners globally.

Because this data only covers maritime shipments subject to tracking by the CBP, there will be differences between this data set and EIA data. Below we compare U.S. oil imports reported by the EIA to aggregated shipping transactions for 2017.

The most noticeable difference between the two data sets is Canada’s rank. On the EIA list, Canada is the top source of oil imports, while it ranks fourth on the list compiled from shipping transactions. However, this makes sense when you consider the extensive network of pipelines and railways that carry Canadian oil into the United States. The more interesting difference is the importance of oil sourced from the Americas. According to the shipping data, Mexico is the number one source of imported oil, followed by Venezuela, Ecuador and Colombia.

We’ll dig into both Mexico and Venezuela below, but it is worth noting the absence of Middle Eastern oil sources. The EIA ranks Saudi Arabia, Iraq and Kuwait in the top 10 sources of foreign oil, but when looking at transactions and originating countries from the shipping data, Saudi Arabia ranks number eight, Kuwait at 14, and Iraq at 16. This discrepancy offers an interesting backdrop to the ongoing OPEC discussions on production targets and crude prices. On the one hand, lower prices should encourage broader consumption, leading to an inflow of dollars. On the other, if the largest market has turned to other sources of oil (including domestic shale), higher prices may be required to maintain stability in economies built on petroleum exports.

The shipping data offers unique insights into the importance of each geographic area, but also allows us to associate each shipment with a specific entity, either the shipper or consignee (receiving party). For example, looking at Venezuela’s oil shipments we see a broad distribution of shippers and consignees, crossing public, private and government-owned entities. This shows a well-diversified sector, but the U.S. company Valero has the single largest exposure to Venezuelan shipments, in particular from state-owned Petróleos de Venezuela. This could be problematic should the U.S. government follow through with threatened restrictions on imports of Venezuelan oil. 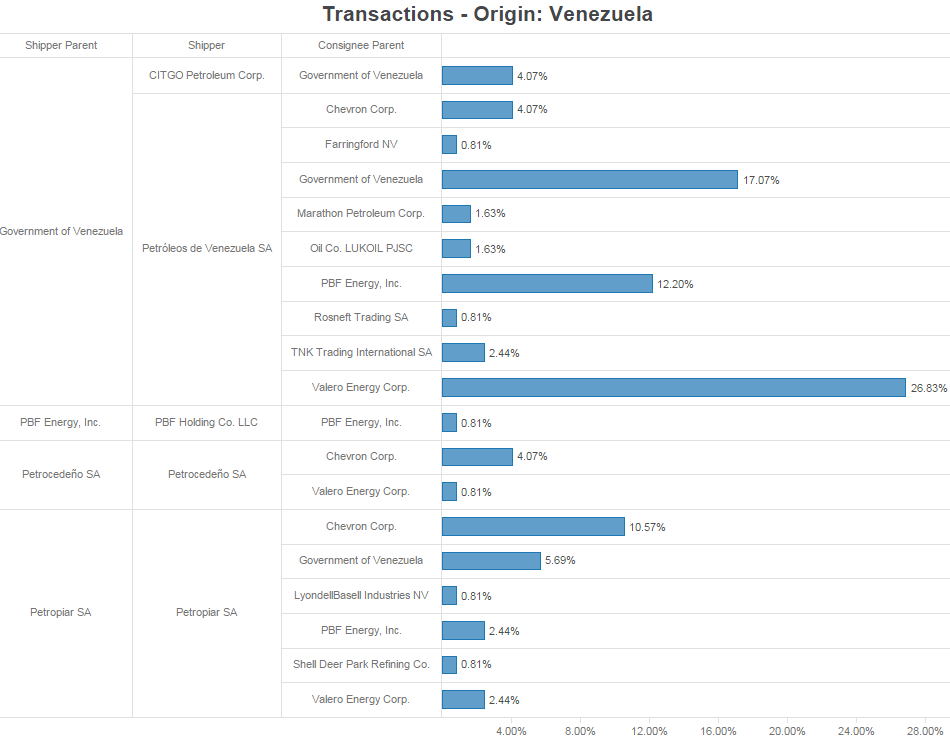 Even more interesting is the comparison between the distribution of shippers in Venezuela (an OPEC country) to exports sourced from Mexico. Compared to the broad distribution of Venezuelan imports, Mexico is heavily concentrated across a few operators, with Valero, Chevron and Lyondell representing over 83% of all transactions. While the concentration of consignees is notable, the monopoly on exports is more striking. All crude transactions originating in Mexico were shipped by PMI Comercio, a wholly-owned subsidiary of the Mexican government. With the evolving focus on oil prices and production capacity, not to mention ongoing international trade conversations, a singularly controlled supply chain creates risks for companies downstream of those shipments. 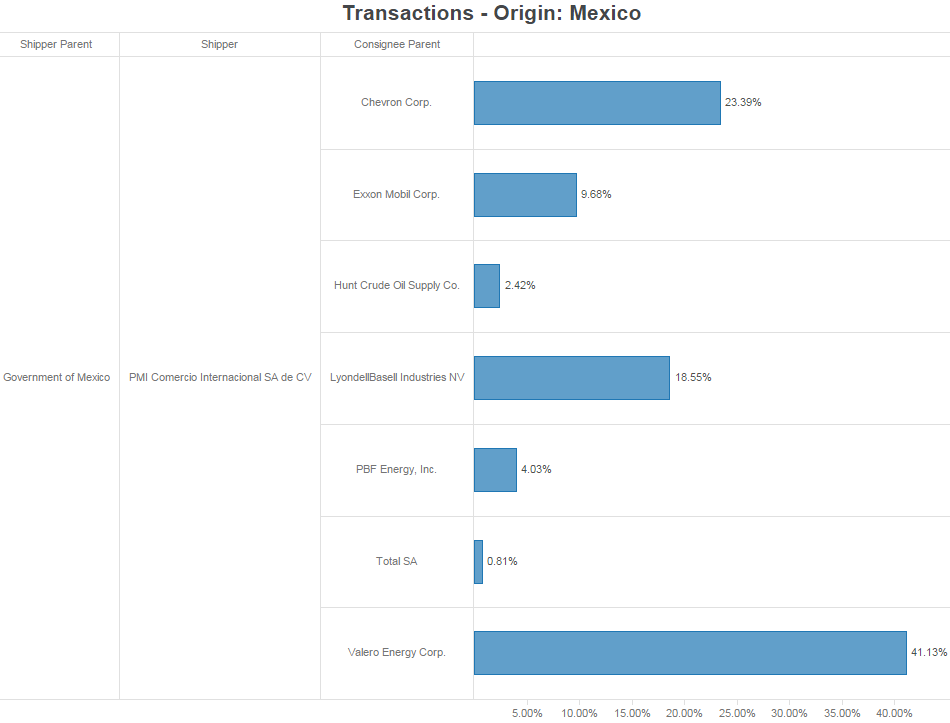 When analyzing oil imports from both Venezuela and Mexico, we see that Valero is the largest recipient of exports from both countries. We can dig deeper into Valero’s trade relationships by looking at all transactions where Valero is the consignee. The manifest descriptions provide further detail on these flows by identifying the specific oil fields that sourced the cargo.

For Valero, the Venezuelan transactions are centered on the country’s largest oil field, the Orinoco Belt, with more than 60% originating from the Zuata site and 23% sourced from the Hamaca site. The Orinoco Belt could be the largest oil reserve in the world according to the U.S. Geological Survey and is in active production today. However, the majority of development in the Zuata area was done with the help of Russian oil companies Rosneft, Gazprom and Lukoil, which could lead to complications for U.S. energy companies. The remaining shipments are sourced from older sites Morichal (15%) and Boscan (4%). The imports sourced from Mexican fields are significantly more concentrated, with 99% sourced from the Maya field.

Since energy companies have limited access to wells, each individual field can have a material impact on company operations. In the case of the Mexican basin, this heavy exposure has been a headwind, as reported in Valero’s February 2018 annual filing:

“Another example is Maya crude oil that sold at a discount to Brent of $7.74 per barrel in 2017 compared to $8.63 per barrel in 2016 representing an unfavorable decrease of $0.89 per barrel. We estimate that the reduction in discounts for sour crude oils that we processed in 2017 had an unfavorable impact to our refining segment margin of approximately $305 million.”

By layering in detailed transactional data with traditional forecasting models, we gain unique perspectives into company operations, which can help generate more accurate estimates of future performance. As shown in this example, examining the sources of imported oil down to individual countries, companies, and even oil fields, provides valuable insights for company analysis, bringing an additional dimension of geopolitical and economic risk into the equation. 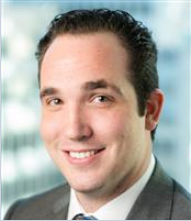 Cole joined FactSet in 2012 and is based in New York.