How Will the German Election Affect Market Volatility?

On September 24, Germany heads to the polls to elect its next prime minister. This election takes place as the economy is showing signs of strength. The German economy is growing steadily, with the latest data showing 2.1% adjusted year-over-year real GDP growth in Q2, the highest reading in more than three years. Business sentiment is strong, with the IFO Business Climate index coming in at 115.9 in August, just below July’s all-time (post-unification) high of 116.0. Consumers are also buoyed by the record low 5.7% unemployment rate. Given these positive numbers, the Christian Democrats (CDU) and Chancellor Angela Merkel (who is now seeking a fourth term) are in a favorable position.

Germany’s exports have been performing well as Germany has emerged from the global financial crisis. More than half of the nation’s trade occurs with members of the European Economic and Monetary Union (58.9%), and its trading partnership with France (5.1%) has flourished, particularly in the wake of the Brexit referendum; however, trade with the ailing deficit countries (Greece, Portugal, Spain, and Italy) has not done as well.

The weak euro over the last decade has spurred exports to the UK and the U.S., resulting in increases in the bilateral trade surpluses with those countries; more recently, Brexit and a weakening dollar have reduced those surpluses. 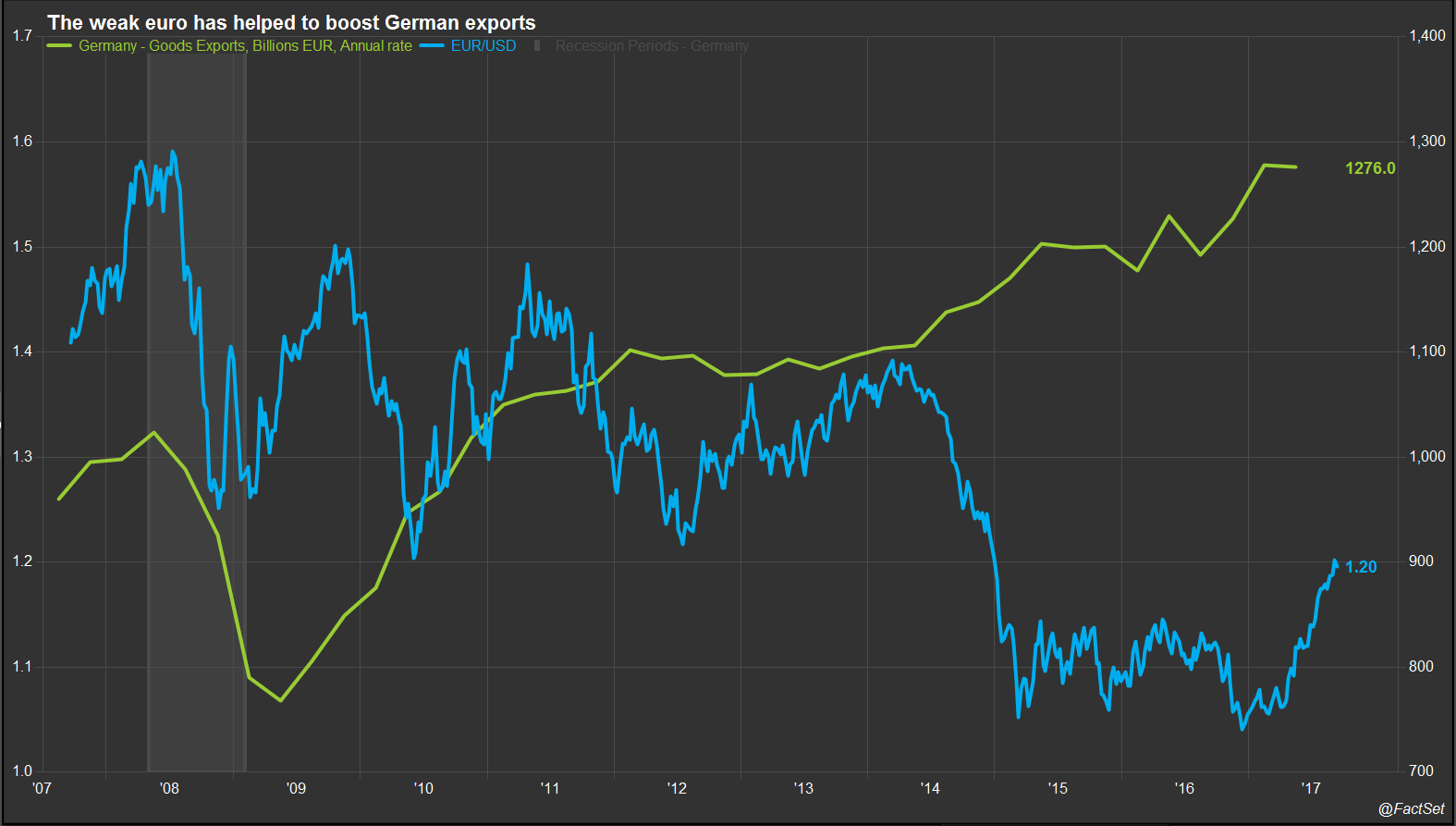 These pre-election days are evocative of the 1950s, when, having overcome wartime destruction, (West) Germany’s growing prosperity and wealth was labeled as an “economic miracle” led by CDU Chancellor Konrad Adenauer and his economy minister (and successor) Ludwig Erhard. German voters historically seem to trust the CDU party to steward the economy better than the Social Democratic Party (SPD) and other smaller parties. However, it was the so-called Agenda 2010 along with its liberal but still controversial labor market reforms (introduced by the SPD and Chancellor Gerhard Schröder in the early 2000s) that likely laid the foundation of Germany’s economic robustness.

Despite an overall strong economic situation, voters tend to cast their votes in unpredictable ways, leaving some scope for surprises a few days ahead of the election. Back in January, with Martin Schulz standing up as the candidate for the German Chancellorship, polls showed the CDU and SPD almost tied (34% vs. 33% - IfD Allensbach, March 2017) or the SPD marginally beating the CDU (32% vs. 31% - Insa Consulere, March 2017). Looking at the most recent poll results, however, there is a 10-15 percentage-point difference on average between the two parties, with the CDU leading. Statistically speaking, sharp and disruptive policy changes are unlikely. However, given Germany’s role as the largest national economy in Europe, its overall political importance, and the need to build functioning coalitions between parties, the election inherits a touch of unpredictability and political uncertainty, especially for the financial investment community.

In light of the pending German election, let’s take a broader look at how national elections can effect stock returns and volatility for both domestic and international investors.

There is published research on the impacts of national elections on stock market volatility. For example, a paper by Białkowski, Gottschalk, and Wisniewski, published in the Journal of Banking & Finance in 2008, found that country-specific components of index return variance can easily double during the week around an election. The article concluded that investors are generally surprised by the election outcome.

Let’s examine excess return and relative volatilities around election dates. The analysis focuses on national elections in 19 countries during the periods presented below. In total, our sample contains 91 elections.

MSCI country indices were used here to study the domestic stock market reactions to elections. As the sample contains several elections for each country, the average returns and the median volatility across all elections were used. This analysis focuses on price developments for 30-days pre- and post-election.

As the table below shows, there was an increase in absolute monthly returns from -0.73% to 0.13% after elections across the entire sample. However, we know that absolute returns were impacted not only by elections but also by general stock market conditions. This is especially important as the sample contains elections that took place during the 2008 financial crisis. To eliminate the general market impact, testing the MSCI country indices vs. the MSCI AC World index can give us a view into excess return. The results show a decrease in the monthly excess return from -0.28% to -0.91% indicating general underperformance of domestic market around elections. 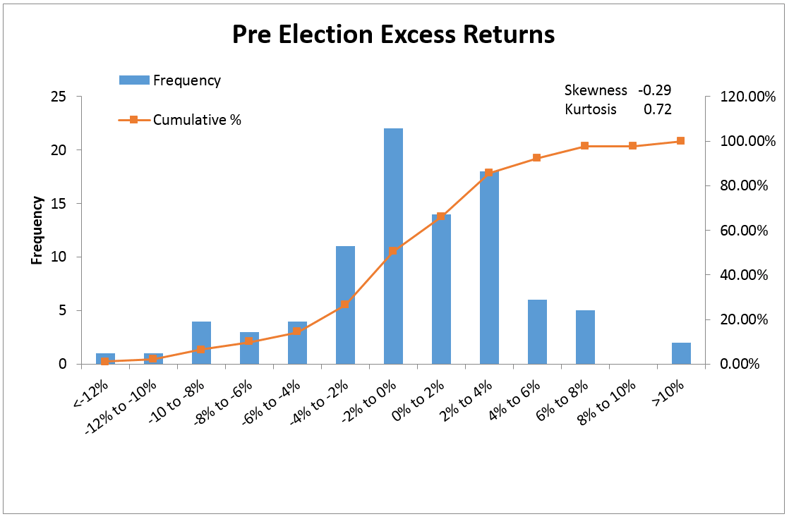 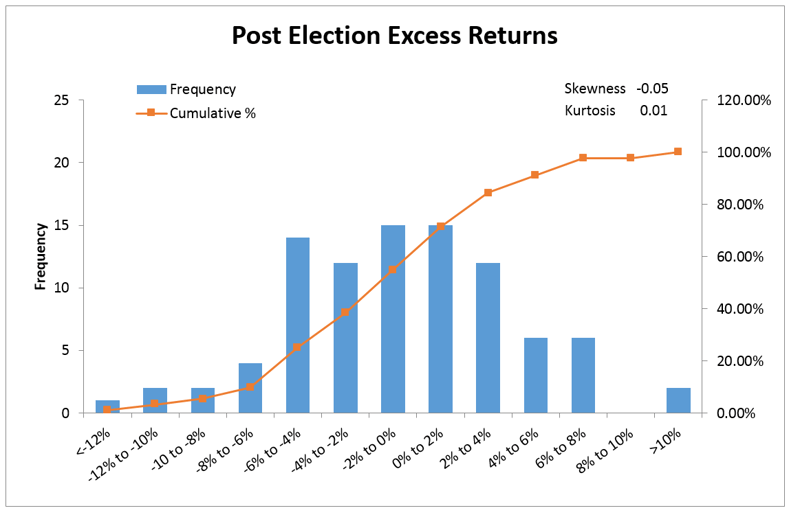 Despite the current strength and stability of the Germany economy and polling indicating a comfortable margin of victory for the ruling CDU, there is still an element of uncertainty heading into this weekend’s national election. An analysis of historical returns indicates that, in general, markets experience negative excess returns and increased volatility post elections. Most signs point to a predictable result in the upcoming German election, but there is always some element of uncertainty, particularly in the wake of recent election surprises.

Christian joined FactSet in 2012 and is based in Frankfurt.