Bracing for the Next Brexit

The UK's unexpected Leave vote on June 24 triggered an onset of fear trading (wiping almost $2 trillion from world markets on Brexit Friday) and generated speculation over the world’s post-Brexit economic future. Consensus real GDP growth forecasts for the UK saw Brexit shaving almost half a percentage point off the growth outlook for 2016 and even more on an annual basis from 2017 to 2019.

The repercussions of the Leave vote were felt worldwide and, even as markets start to bounce back, the UK’s decision has created mixed messages for investors. With new UK PM Theresa May naming three hardline euroskeptics to her cabinet, and the EU teetering on the brink of an existential crisis, uncertainty has been the only constant in the post-Brexit world.

Temporary Loss of Economic Momentum or Beginning of the End?

Brexit hit eurozone sentiment strongly and elevated fears of a domino effect that would result in a eurozone break up in the long term. Sentix’s euro break-up index moved from a 12.27% probability at the end of May to a 27.18% likelihood post-Brexit. Increasing concerns over Grexit, Quitaly, and other movements can be seen in Sentix’s Exit Probability series for individual countries in the chart below. 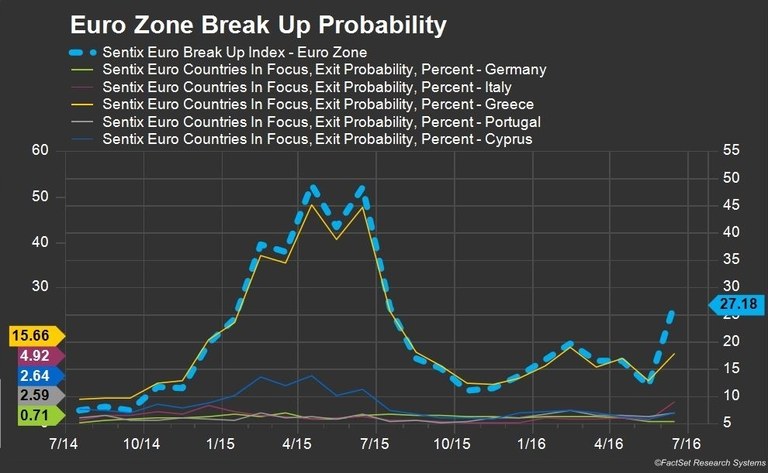 Looking at investor sentiment and exit probabilities over the past year, Brexit seems to have merely renewed concerns that peaked in 2015 but quickly dissipated. During that peak, the strength of the EU’s security cooperation was put to the test, as the region witnessed the largest refugee crisis since World War II and several terrorist attacks that created tension between member states.

Tensions were also been intensified by troubled economies dealing with high levels of indebtedness and heated rows with Brussels over rigid bailout rules. With political instability and disagreement amongst heads of state rife, countries like Greece began flirting with the idea of a Grexit, justifying the almost 60% likelihood of a eurozone breakup recorded by survey results in mid-2015.

Could Quitaly Dwarf the Brexit Shock?

While the mid-2015 survey shows that break-up fears existed even before Brexit, Italy has given investors a new reason to watch their exposures in the EU. With over $300 billion of bad debt and a crumbling financial system, the risk of an Italian banking crisis  could create another major shock for the region.

Italy’s preferred solution is a huge injection of EU government money, rescuing investors and vulnerable banks from serious downfall. However, Germany has so far been unwilling to relax conditions for a bailout. With public debt currently standing at 135% of GDP and adult employment rates among the weakest in the EU, Italy is not only witnessing an investor exodus but risks losing some of its oldest banks to solvency.

A look at Italy’s accumulation of non-performing loans makes it hard to disagree with that sentiment. 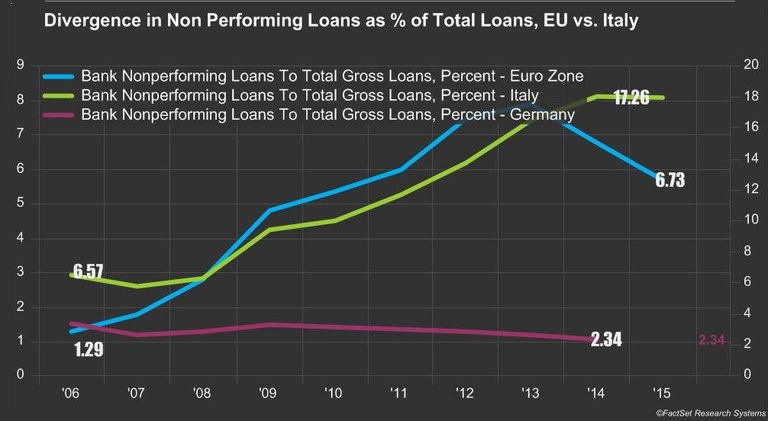 While the non-performing loans to total gross loans percentage in the eurozone began to decrease in 2013, it began to increase in Italy. This is a clear reflection of the differences in recent financial history, economic dynamics, and policy making between Italy and rulebook-committed Germany.

These differences are at the root of the Quitaly movement, which proponents say would give Italy the power to make decisions without the approval of Brussels. However, with German elections due next year and Merkel seeking to avoid voter dissent, there is more than one reason for Germany to deny Renzi’s appeal for leniency.

Economic and political instability has always created pressures for the governing bodies of the European Union. Yet, with low visibility on monetary policy outlooks around the world post Brexit, uncertainty has blanketed economic policy expectations in the region. This is evident from the steep incline in the Economic Policy Uncertainty (EPU) News Based indices following the news of UK’s referendum a year ago. 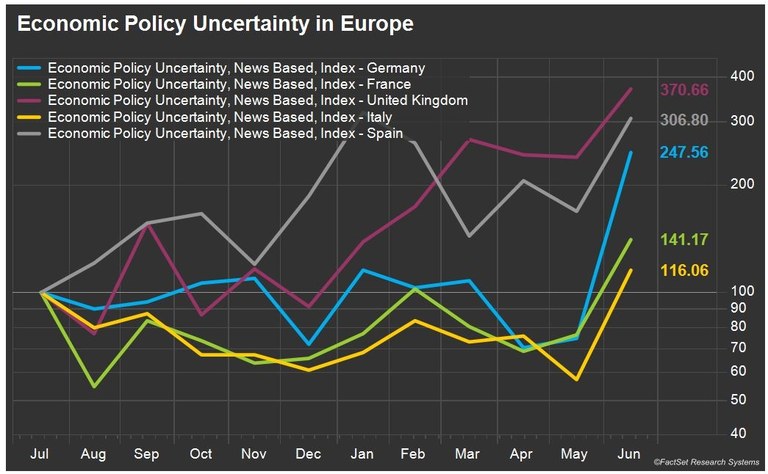 With populist parties on the rise across Europe, a second Scottish Independence Referendum potentially slated for next year, and France’s labor market reforms creating chaos, the cohesion of the EU is at stake. It is therefore reasonable to expect policy uncertainty to continue over the coming months.

The policy decisions that do happen will hinge on how well markets recover and will need to consider developments in the UK’s exit negotiation process, the unraveling of Italy’s banking crisis, and other potentially disruptive events. Changes to the European Stability Mechanism must also be considered when gauging the risk of additional EU exits in the future.

Due to the imposition of nationwide measures to contain the COVID-19 pandemic, Canadian economic activity was sharply curtailed...

Does a Fiscal Reckoning Loom for South Africa?

South Africa's March 27 implementation of stringent COVID-19 lockdown measures have dealt yet another blow to an already...