On May 21, 2019 the Securities and Exchange Commission (SEC) unexpectedly announced that it would launch the Transaction Fee Pilot (TFP) under Reg NMS after all, despite initially delaying its launch and despite the fact that the NYSE, Nasdaq and CBOE are continuing to challenge the matter in the courts. The pilot will run from  July 1 until  December 31,  2019.

The SEC also issued guidance on the exchange fee filings that will have to be made, emphasizing that exchanges must justify proposed fee increases for data and connectivity on the basis that they are, in compliance with Exchange Act rules: (i) reasonable, (ii) equitably allocated, (iii) not unfairly discriminatory, and (iv) not an undue burden on competition.

The announcement and the guidance make clear that the exchanges need to demonstrate that their pricing is not anti-competitive and does not lead to market distortions, which are concerns that have been voiced by institutional investors in feedback published on the SEC’s website following its market data roundtables in late 2018.

On May 8, 2019, the Commodity Futures Trading Commission’s (CFTC) Division of Enforcement published its first Enforcement Manual. The manual describes policies and procedures that guide the work of departmental staff in detecting, investigating, and prosecuting violations of the Commodity Exchange Act and CFTC Regulations. It also provides the general public with information about the department’s operations with the intent to increase transparency, certainty, and consistency.

On May 10 , 2019 the SEC announced proposals for a package of technical reforms of rules governing security based swaps under the Securities Exchange Act of 1934, originally introduced by Title VII of the Dodd-Frank Act. The proposals seek to strengthen and rationalize the rules governing cross-border security-based swaps with the aim of improving investor protection.

The proposed rules, together with supplementary interpretive guidance, include using transactions “arranged, negotiated, or executed” by personnel located in the U.S. as a trigger for regulating security-based swaps and market participants, and introduce interpretive guidance to delineate the scope of application of relevant rules where there is limited involvement by U.S. personnel.

Other proposals seek to liberalize and simplify some of the existing rules including the requirement for non-U.S. resident security-based swap dealers and major security-based swap participants to certify and provide a counsel opinion permitting the SEC access to their books and records and to conduct onsite inspections and examinations, and the rules on maintaining questionnaires and employment applications for their foreign associated persons.

Finally, there are proposals to modify the cross-border application of statutory disqualification provisions in-line with the approach adopted by the CFTC in relation to in-scope swaps. The public comment period will remain open for 60 days following publication of the proposal in the Federal Register.

On May 14, 2019, Commission Delegated Regulation (EU) 2019/758, supplementing the EU’s 4th Money Laundering Directive (4MLD), was published in the EU’s Official journal. It establishes a suite of additional measures firms must implement by September 3, 2019 to comply with MLD4 where credit institutions and financial institutions operate in a jurisdiction with laws—such as those that impose banking secrecy—that otherwise prevent the application of group-wide 4MLD-calibrated AML/CTF policies and procedures.

In a press release published on May 16, 2019, the European Commission announced two settlements resulting in over a billion euros in fines for five banks. These banks took part in two cartels involved in the spot foreign exchange market in 11 currencies including the euro, British pound and U.S. dollar. The first settlement fined four bulge bracket banks for the "Three Way Banana Split” cartel and the second addressed the “Forex-Essex Express” cartel for three other banks. The names of the cartels were based on the names of the Bloomberg chatrooms where the collusive behavior was arranged. UBS was an addressee to both decisions but was not fined on the basis that it was first to blow the whistle on the cartels.

In its press release, the commission drew attention to the scope for impacted parties to bring actions for damages before member states courts, emphasizing that EU case law and Council  Regulation 1/2003  confirm that a Commission decision constitutes binding proof that the behavior took place and was illegal. This may be of interest to asset managers, pension funds, hedge funds, corporations and other financial institutions on the wrong end of the collusive behavior and could see the damage from the conduct rise well above the initial fines.

The European Council has announced a new CRD V prudential framework for banks that strengthens the existing measures by implementing FSB and BCBS post-crisis recommendations adopted by the G20. Rather than recasting the existing regime, it amends CRR (Regulation 575/2013) and CRD IV (directive 2013/36/EU), BRRD (Directive 2014/59/EU) and the BRRD companion Single Resolution Mechanism (Regulation 806/2014).

The package of reforms will be published in the Official Journal in June 2019 with the majority of the requirements coming into effect in mid-2021.

Key measures include a binding leverage ratio for all banks, an additional leverage ratio buffer and Total Loss Absorbing Capacity requirement (TLAC) for global systemically important institutions (G-SIIs), Minimum Requirement for own funds and Eligible Liabilities (MREL) subordination rules for G-SIIs and other large banks, further measures on the Net Stable Funding Requirement (NSFR), a new market risk framework for reporting purposes which simplifies market risk and liquidity rules for small non-complex banks,  a requirement for third-country institutions with a significant presence in the EU to establish an EU intermediate parent undertaking and a new moratorium power for the resolution authority.

The package also contains a number of EU-centric measures such as incentives for investments in public infrastructure and SMEs and a credit risk framework for facilitating the disposal of non-performing loans.

EMIR Refit to Enter into Force in July

The EMIR Refit Regulation was published in the Official Journal on May 28, 2019 and the majority of its provisions will enter into force on June 17, 2019. To assist firms with implementation, ESMA has updated its Q&A in relation to the new framework together with amendments to existing Q&A on novations.

EMIR Refit seeks to improve the functioning of the derivatives market and simplify the EMIR regime by injecting a degree of proportionality into its application. Specifically, it creates a new counterparty category: the Small Financial Counterparty (SFC), which will exempt in-scope firms from the mandatory clearing obligation where they undertake calculations that demonstrate they fall below certain thresholds, with the first calculations due on the day EMIR Refit enters into force. Thereafter, the calculation must be repeated annually, and an FC will need to continue clearing until it can demonstrate to its National Competent Authority that its aggregate month-end position does not exceed the relevant threshold. If a firm fails to undertake the calculations or exceeds any of the thresholds, it must notify ESMA and its National Competent Authority on June 17, 2019, and, four months later, commence clearing OTC derivative transactions. Separate rules are introduced for non-financial counterparties also.

The regulation makes several other technical amendments to EMIR including an expansion of the Financial Counterparty category to capture most EU hedge funds (AIFs).

On May 29, 2019, ESMA updated its Q&A on MIFID II investor protection topics, including questions related to best execution and costs and charges information. The best execution updates revolve primarily relate to specific RTS 27 and RTS 28 reporting issues, and the costs and charges updates cover a range of topics, from ex-ante sell orders to the use of ranges and maximum amount or percentages for ex-ante information.

ESMA announced on May 28 that it had published three consultation papers under EMIR 2.2, the regulation that amends the regulatory and supervisory regime for central counterparties (CCPs). EMIR 2.2. focuses on recognition of third country CCPs and includes a dedicated regime for third country CCPs determined as being, or likely to become, systemically important for the financial stability of the EU or one or more of its Member States, referred to as Tier 2 CCPs. Tier 1 CCPs are those regarded as non-systemically important. Tier 2 CCPs must comply with EMIR requirements or ask for comparable compliance, where compliance with the requirements in a third country satisfy the EMIR requirements.

The consultations are on the data required to determine tiers and the criteria for allocating CCPs between tiers, the considerations and process for assessing comparable compliance and the fees to be paid by third country CCPs under the regime.

Stakeholder responses are required by July 2019 after which ESMA will finalize its technical advice to the European Commission following the publication of EMIR 2.2 in the Official Journal.

This announcement follows the recent press release from ESMA on recognition of the UK’s three CCPs in the event of a no-deal Brexit.

As with most flagship EU financial regulations, the Market Abuse Regulation (MAR) requires the European Commission to prepare a report for the EU Parliament and Council on the functioning of the regulation and whether reform is required. .

The Commission has asked ESMA for advice in relation to this report and has asked for additional advice on whether spot FX contracts should be covered by MAR, to investigate the scope of reporting obligations under the exemption for buyback programs, to evaluate the effectiveness of the rules that permit delayed disclosure of inside information, to evaluate the usefulness of insider lists in investigating market abuse, to evaluate whether the rules governing managers are broad enough to capture all managers of funds,  and also to evaluate cross-border enforcement of sanctions.

ESMA has been asked to provide its contributions by no later than December 31, 2019, suggesting a half year delay on the regime reflecting the EU’s preoccupation with unfolding developments such as Brexit. However, once the matter is taken into hand, the market can expect with a high degree of probability a MAR II, as many aspects of the regime, as highlighted by the contents of the Commission’s request, remain unfit for purpose. What is more difficult to discern is whether any changes will be technical or fundamental.

As formerly reported in the April edition of FactSet Insight’s Monthly Regulatory Update, the FCA and ESMA had a disagreement on the application of the MIFIR share trading obligation (STO) following a potential hard Brexit, in the wake of ESMA’s surprise announcement that it intended to invoke jurisdiction over trading in 6200 specific shares, including 14 of the UK’s most liquidly traded, dual-listed stocks such as Vodafone and BP.

On May 29, ESM issued a statement that it would compromise on the UK shares within the list in cases where FCA rules did not ‘overlap’ (i.e. conflict) with EU rules on the EEA shares subject to the MIFIR share trading obligation. In its statement, ESMA said that it had been in negotiation with the FCA but these negotiations had not progressed.

In response, the FCA issued its own statement stating that it was ‘encouraged’ that the EU had permitted UK stocks to be traded in the UK but that ESMA had a long way to go on its position if it intended to avoid market disruption. If a hard Brexit materializes, further coordination on this issue will be needed.

Following the adverse findings of the FCA’s Asset Management Market Study and the recommendations of the Institutional Disclosure Working Group (IDWG) set up in response to the study, the FCA published a press release on May 22 welcoming the announcement by the Cost Transparency Initiative (CTI) that industry-ready templates have been made available for the disclosure of costs and charges to institutional investors. These templates can be used by institutional investors to access and assess critical information on costs and the standardization they bring should facilitate comparison of charges between providers. 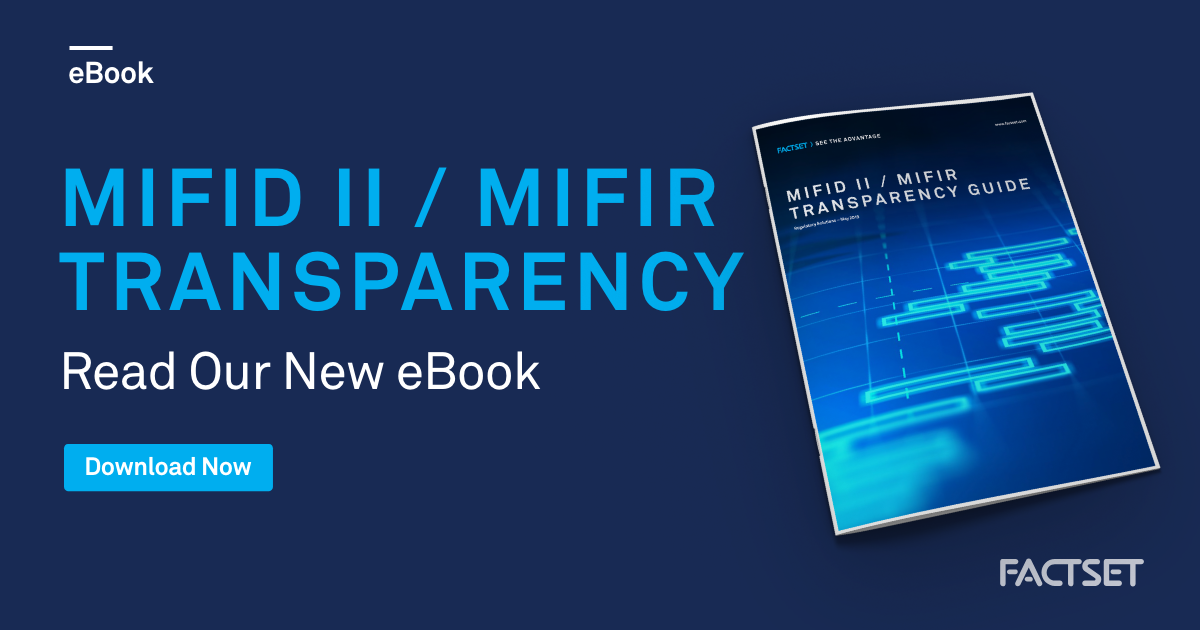 Regulatory stories dominating the conversation in May 2021.