July was one of the best months for ETF inflows in recent history, with over $50 billion flowing into every asset class. It’s a remarkable turn to “risk-on” investing, and comes in the face of anemic economic news and a divisive political landscape. Clearly, investors are willing to look past the short term news flow and put money to work in low-cost, tax efficient ETFs.

While US Equities and Fixed Income led the charge, it’s worth noting that even the international markets had strong flows.

For top gainers, it’s worth noting that investors aren’t just putting their toes back in the risk waters; in some cases they’re diving right in. Corporate bonds, emerging market debt, small caps, and junk bonds lead the winners here.

We can also tease out what kind of investors are wading back in. The iShares MSCI Emerging Markets ETF coming in second is telling, as it's traditionally the institutional trading vehicle because of its outstanding liquidity. Competitor VWO from Vanguard, which has been winning the decade-long battle for advisor assets, has $528 million in flows as well, but the reversal of the long term-trend here suggests to me that this isn’t advisors coming back as much as it’s institutions and hedge funds.

It was also a great month for BlackRock, with eight of the top 10 funds coming from the iShares complex.

Meanwhile, On The Shady Side of the Street

If the inflows are big and broad, the outflows are highly targeted. Flows out of Europe in particular make sense, given the continued Brexit fallout and downward revisions of economic estimated for the region.

All told roughly $1 billion flowed out of sector-specific funds – a small move on the $269 billion that remain – while the rotation out of financials, energy, tech and utilities was offset by rotation into real estate and basic materials.

At the issuer level, it’s easy to see the changing tides – if last month was about fortress Vanguard, this month is about the revenge of the first movers, BlackRock and State Street. 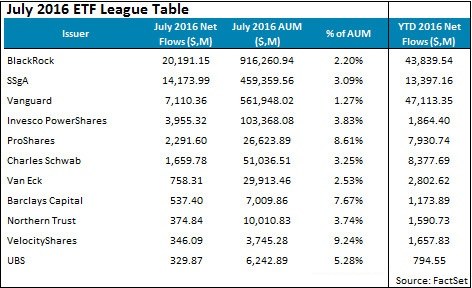 While SSGA’s flows are heavily concentrated in their two marquee funds, SPY and GLD, BlackRock saw strong flows, with only 77 funds having modest outflows vs. 159 funds with inflows for the month, 26 of which had flows over $250 million.

As a final note: I can’t help but be impressed with Schwab’s continued steady rise up the leaderboards. Now firmly in fifth place, with $12 billion more than former fifth place holder WisdomTree, it recently announced crossing $8 billion in its ETF-centric Robo-advisor platform, Schwab Intelligent Portfolios. It turns out offering a free asset-allocation and rebalancing service can really help drive assets.