M&A Activity in the Aftermath of U.S. Elections

The U.S. election is finally over, and after eight years away, the Republicans are moving back into the White House, this time with majority control of both the House and Senate. This election cycle has been unprecedented by any number of metrics, but now that it’s over we can compare the last five cycles to see if there is any insight into what we can expect for mergers and acquisitions in the near future. Even before you get into policy specifics, elections can sometimes bring uncertainty, and as we’ve seen with Brexit and other market shocks, uncertainty can be a major catalyst in driving away deals.

Looking at the one-year period before and after each election, we can compare the share of deals that are announced in the run-up to the election to the latest 12 months prior (LTM), and then compare post-election deal-making to the next 12 months (NTM). What we find is, typically, there is less volume leading up to an election than after the election; the only cycle where post-election had a lower impact on the corresponding period was way back in 1996. The lowest share prior to an election was in 2008 where the month prior only accounted for about 6% of the LTM volume. This year is about average with 8% in the month prior to the election. 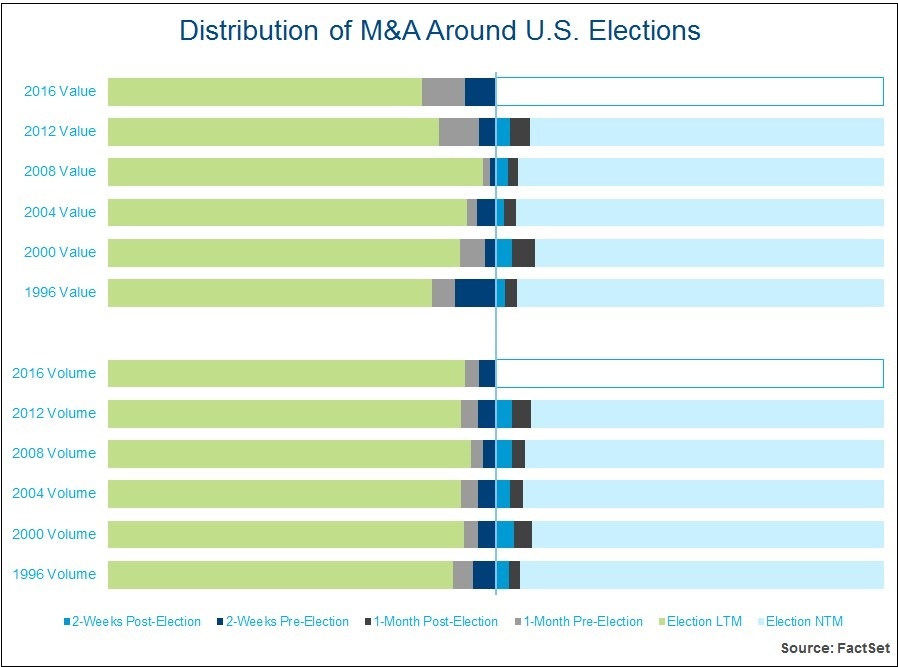 Shifting to absolute dollar amounts, we can see that 2016 has been exceptional compared to previous election cycles, with the average deal value per day for the month prior, two weeks prior, and two weeks postelection all around double the next closest amount. The postelection period for 2016 has already seen a pullback compared to prior to the election. 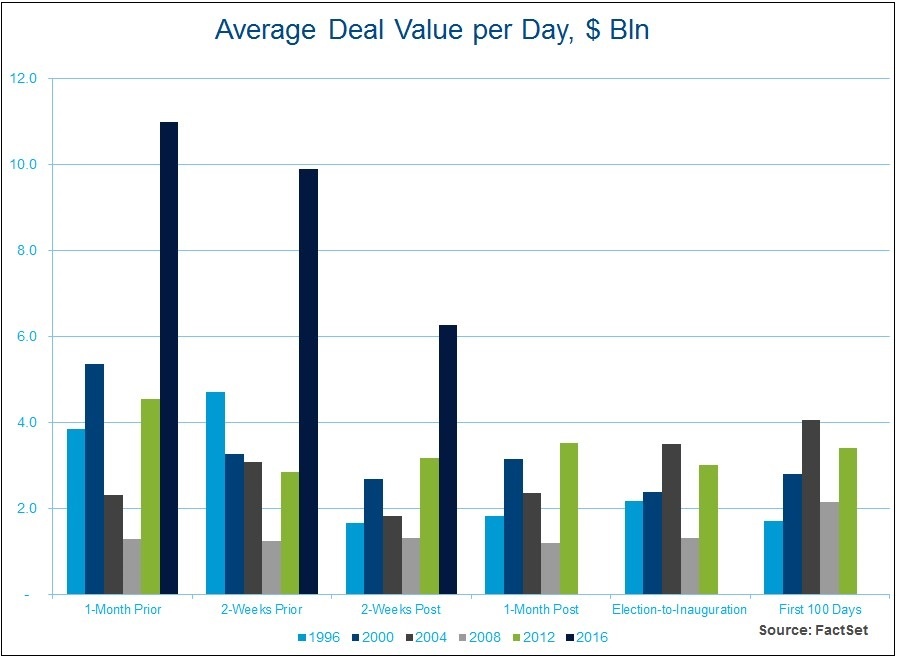 Next, looking at the variance of each period to its corresponding LTM or NTM, 2016 compares favorably with 1996 in that for both the one month and two week prior periods the average deal values were significantly higher than the average for the prior LTM. If 2016 follows 1996 trends, then the key post-election periods could report lower than average deal value per day compared to NTM. Indeed, if 2016 proves to follow all prior election cycles then the post-election periods will be lower than average and the only question is by how much lower. Of course, as with most things this cycle, 2016 could very well prove to break the mold here as well. 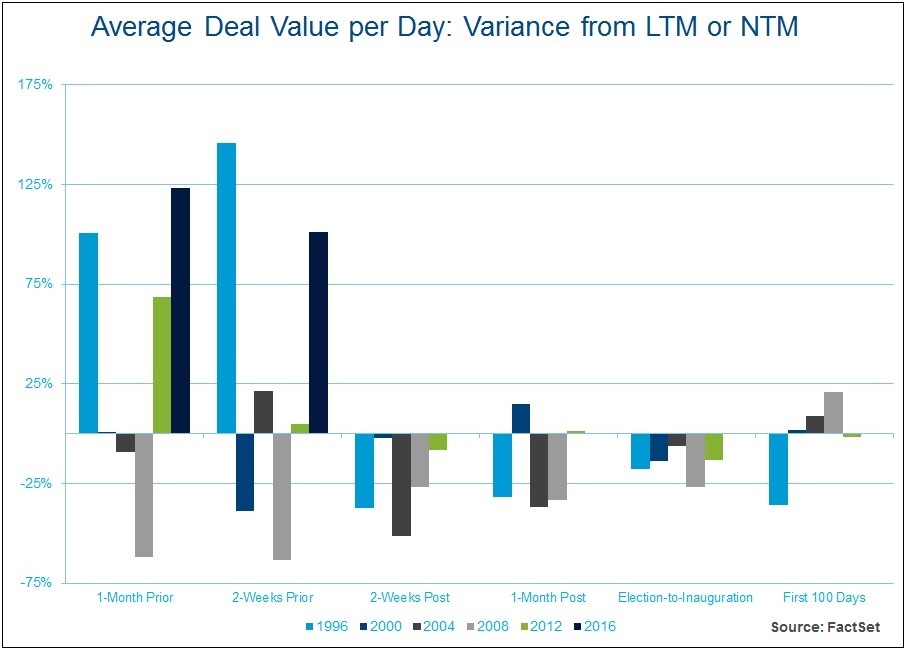 Finally, looking at the long term, four of the last six elections have occurred in declining or negative deal environments. With the election finally over, it remains to be seen whether dealmakers can get back to business and potentially play “follow the (new) leader” with The Art of the Deal or if the slide will continue. 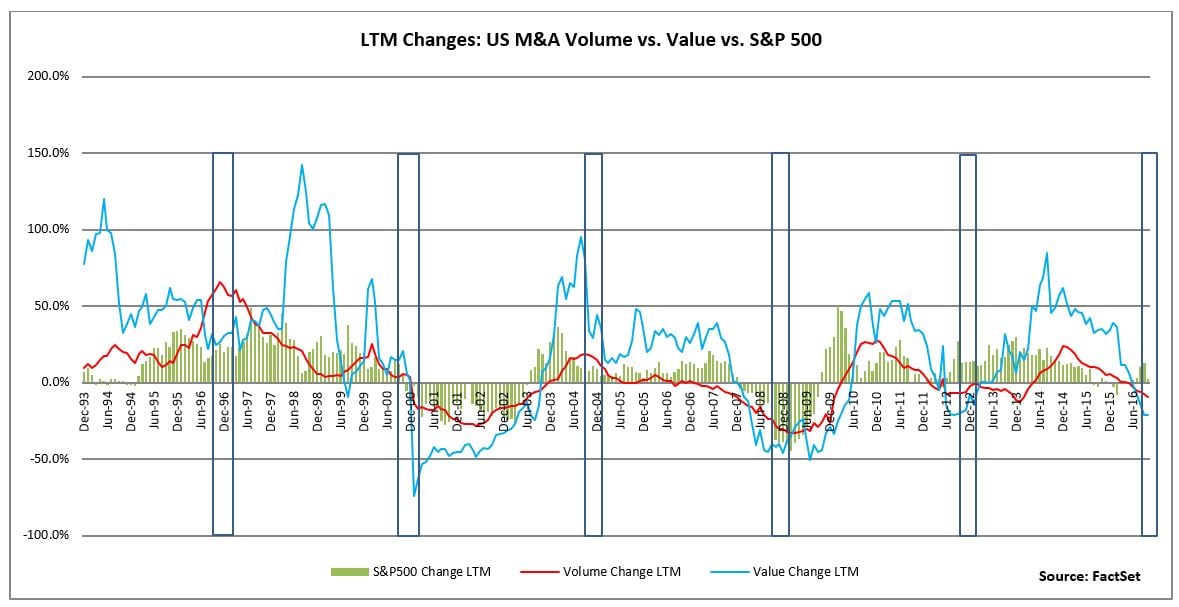 Uncovering the Value of Individuals Through Client Relationship Management Systems

Content associated with an individual can be used for in-house workplace applications such as Client Relationship Management...

By Elliot Worth  |  Companies and Markets

The Demise and Rise of Golf

As quarantine restrictions eased and temperatures warmed throughout the U.S. in the summer of 2020, golfers rushed to local golf...

By Carmine DiCesare  |  Companies and Markets