With more than 95% of companies in the STOXX Europe 600 having reported their fourth-quarter results, earnings growth in Europe is strong. In September 2021, analysts were projecting EPS growth of 35% for Q4. With earnings season about to wrap up, the reported earnings growth for the quarter is an impressive 68%. This is a dramatic turnaround from the fourth quarter of 2020, when the European index saw a 4% contraction in earnings. Europe is also growing faster than the U.S., where earnings saw growth of 31% in Q4.

The European Energy sector is reporting a whopping 642% earnings growth in Q4. The market expected 416% earnings growth last September; however, the sector came in significantly higher when we look at the reported figures. In contrast, in the U.S., Industrials is the fastest growing sector, reporting 94% earnings growth, lower than expectations back in September for 130% growth. Utilities reported lower earnings in both regions with actuals coming in below expectations.

Ten Out of 11 Sectors Exceed Expectations 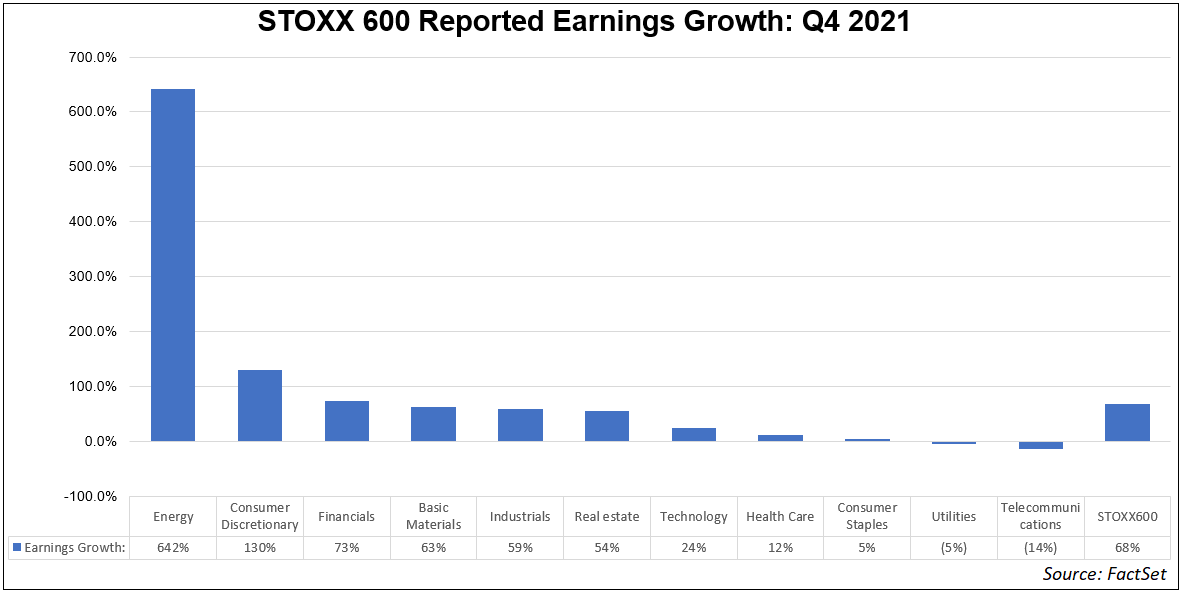 Revenues also came in strong in Q4. Not surprisingly, Energy outpaced every other sector, with revenue growth of 68%. All sectors reported revenue growth in Q4 with the majority growing by double digits; in aggregate, the index saw 19% growth. Basic Materials reported the second largest revenue growth in the region, increasing by 30%, while Telecommunications grew a modest 1%. In Q4 2020, most sectors (six of 11) reported negative earnings growth, with Energy at the bottom of the list with a 34% decline—a very different story compared to this quarter. 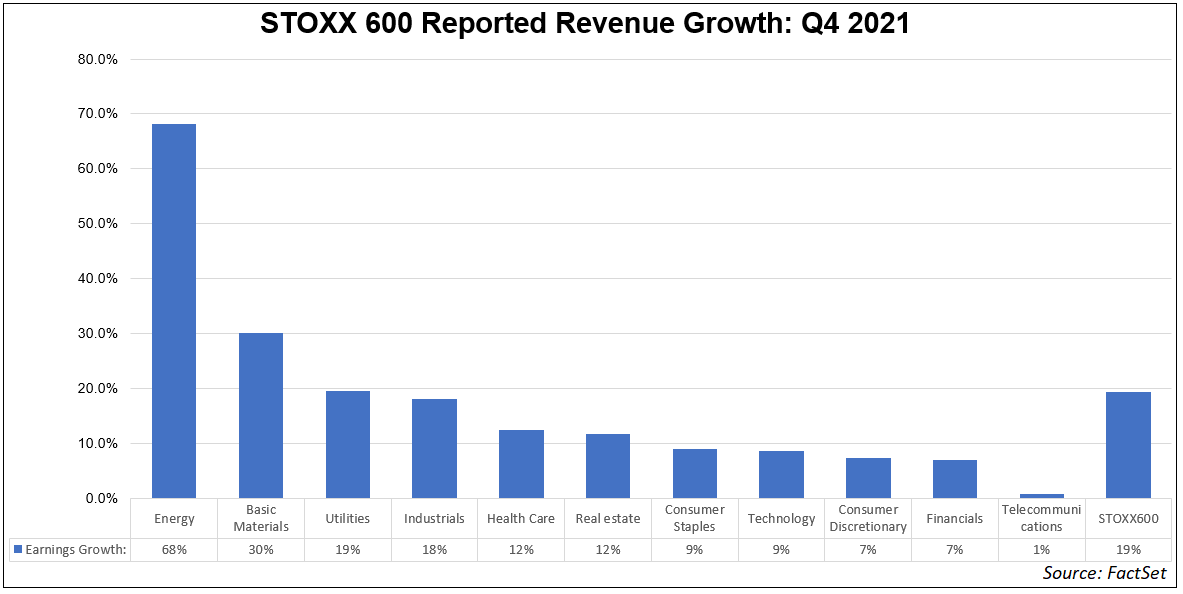 Largest Earnings Beat in Half a Decade

Revenues Come in Above Expectations Across Most Sectors

We are seeing the same trend as in Q2 where analysts continue to be better at estimating revenues than earnings. Analysts continue to underestimate margins, indicating that over the past year, companies have continued to exceed market expectations for earnings.

Even though the number of companies in line with estimates this year was lower than any other period recorded over the past five years, that’s largely due to companies on aggregate beating expectations at such a high rate. We are continuing to see the trend of lower expectations across estimates compared to pre-pandemic levels. Companies continue to exceed analyst expectations, driven by a continued cautious approach from analysts as well as more modest company guidance.

Caution has been a clear theme in 2021, with European companies beating analyst expectations at rates not seen in years. As of December, analysts remained cautious about the outlook for 2022, expecting 5% earnings growth for CY22; now that we are through the Q4 reporting season, this has increased to 11%, despite the conflict in Ukraine. The driving force behind the increased growth estimates is the Energy sector, which has gone from an expected earnings growth rate of 23% in December to a 57% projected increase currently.

We’re seeing the same thing on the revenue front, where analysts have become more optimistic, increasing their revenue growth estimates for CY22 from 5% in December to 10% currently. As with earnings, the increase is mostly driven by higher revenue expectations for the Energy sector, now expected to grow 30% in CY22 compared to 8% back in December. It appears that caution will continue to be the theme for 2022, with analysts continuing to weigh the impacts of the pandemic and the evolving conflict in Ukraine.