Energy Reporting Extreme Earnings Growth Both in Europe and U.S.

Most Sectors in the STOXX Europe 600 Reporting Positive Earnings Growth

In the fourth quarter of 2021, only Utilities and Telecommunications reported negative earnings growth. In the second quarter of 2022, Utilities fell off a cliff with a 171 % negative earnings growth driven almost entirely by the Finnish Utility company Fortum. If we remove Fortum from the sector, Utilities would only report a 2% decline, demonstrating the harsh conditions the European energy crisis is causing to individual companies in the region. Most other sectors of the STOXX Europe 600 reported healthy earnings growth, apart from Energy that led with a significantly elevated 226% earnings growth, again driven by the European energy crisis. The STOXX Europe 600 reported 26% earnings growth in total for the second quarter, beating analyst expectations of 10% from back in March. As we noted in our last European earnings update, the performance of the STOXX Europe 600 in the fourth quarter of last year was also driven mostly by the Energy sector, a theme we see continuing throughout 2022. 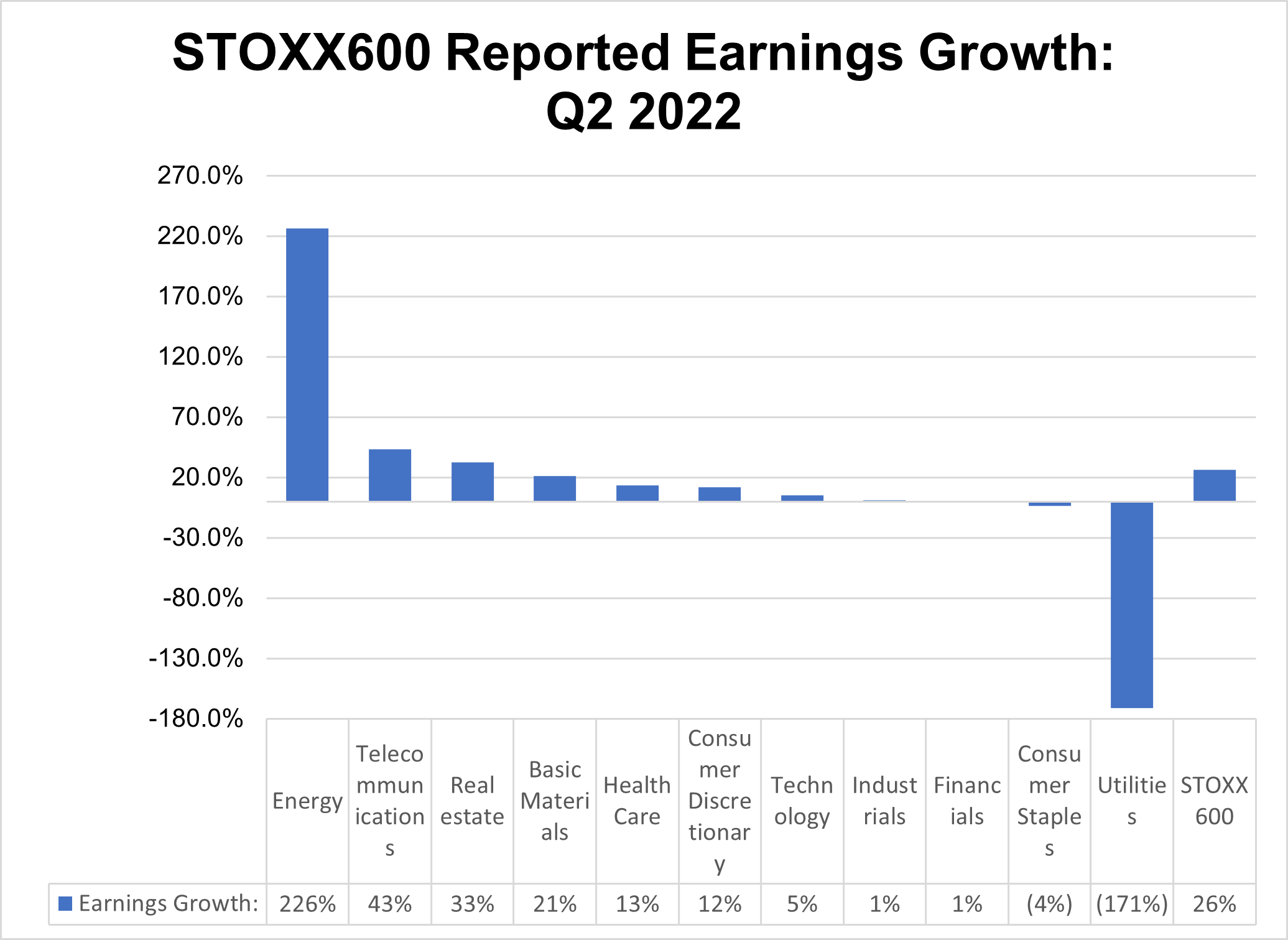 Revenues also came in strong for the second quarter with overall revenue growth of 27% in the region, driven in large part, as expected, by the Energy and Utilities sectors, which reported 82% and 51% growth, respectively. All sectors reported positive revenue growth in the second quarter demonstrating strong growth across the board in the region, beating analyst expectations of 16% growth from expectations back in March. 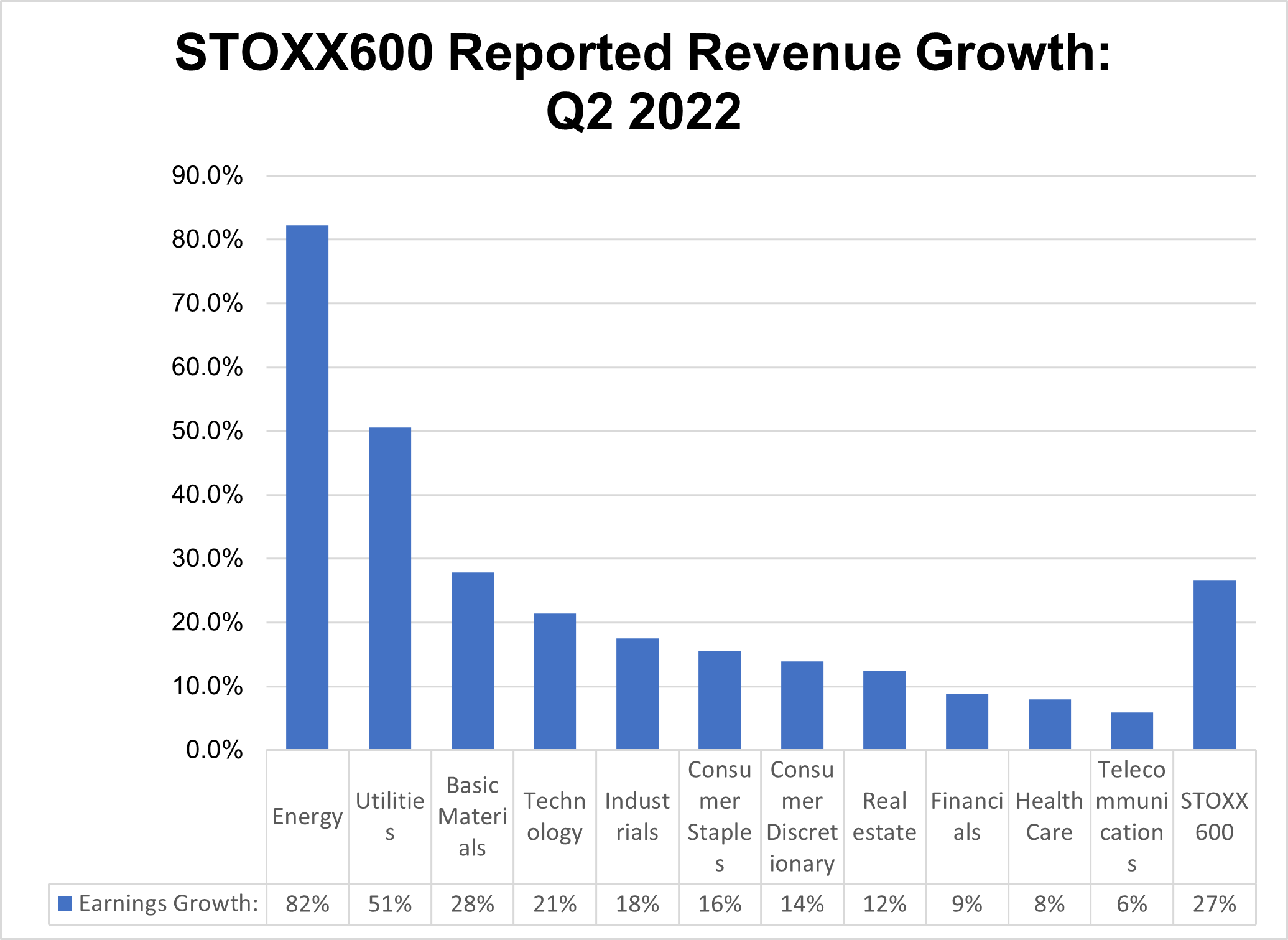 If we look at aggregated second-quarter earnings compared to the previous six years, the second quarter came in just slightly over the six-year average, much closer than last year’s elevated figures where we saw a strong beat % (68%) compared to the average. The share of in-line estimates continues to be significantly lower than pre-pandemic levels mimicking the second quarter of 2020, performing in-line with expectations compared to historical figures. It’s clear that analysts are continuing to struggle with estimating company earnings post covid with market conditions providing a challenging backdrop. 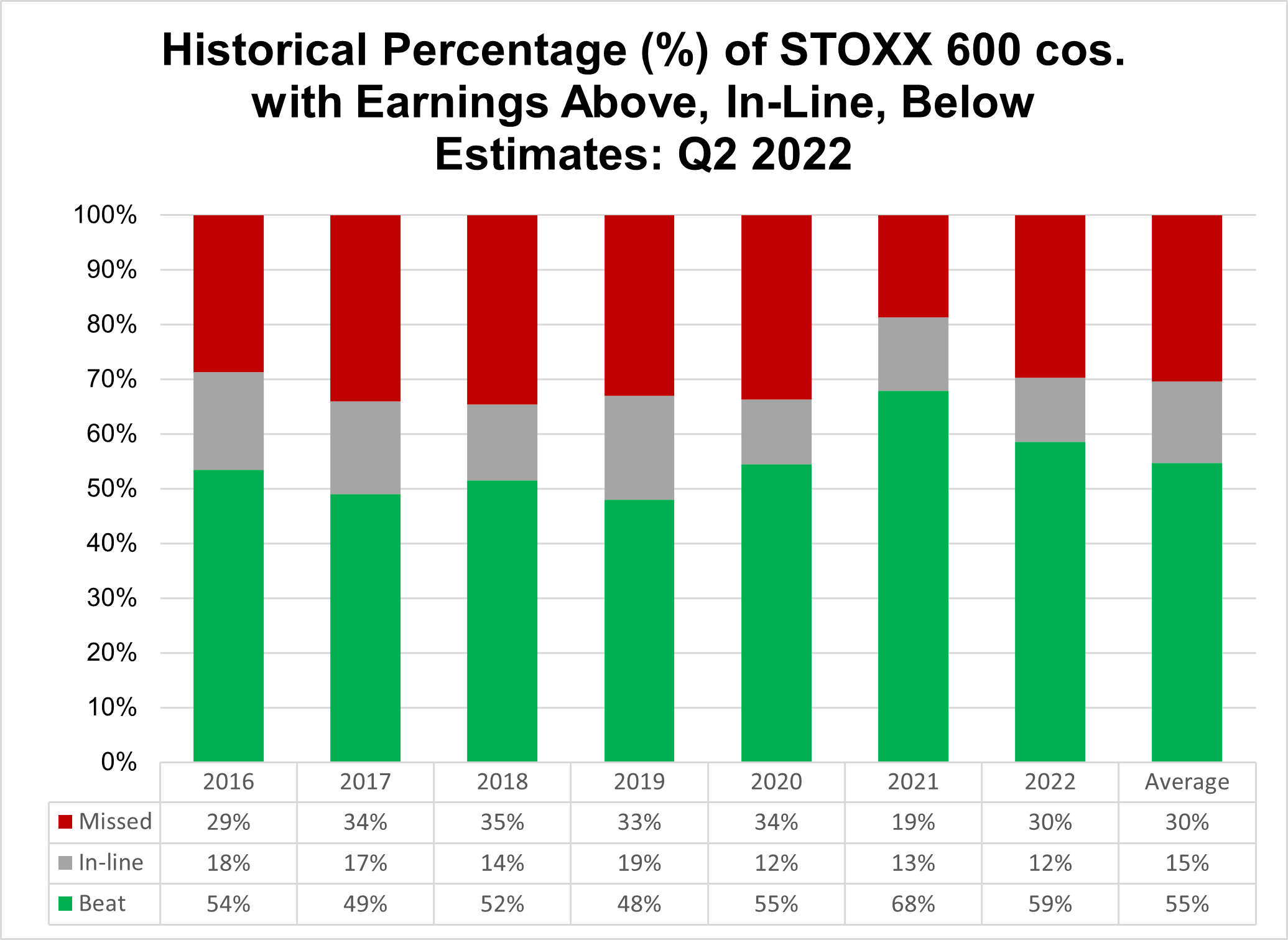 On the revenue side, most companies in the STOXX 600 came in above consensus (54%), while 35% came in line. Five out of the 11 sectors on the STOXX 600 had less than 50% of companies beating analyst expectations for second-quarter revenues, a breaking trend compared to last year when six out of the 11 sectors had more than 50% of companies beating. Even though Energy reported an 82% increase, analyst expectations were even higher, resulting in only 41% of Energy companies beating expectations. Utilities had by far the highest revenue beat, with a whopping 91% coming in above analyst expectations, even though earnings growth was negative for the sector in the quarter. Also, interesting to note is that the Health Care sector only had 5% of companies reporting below revenue expectations for the quarter. We see the same trend as last year, where analysts continue to be more in line when estimating revenues compared to earnings, where they continue to be more cautious, indicating that companies have been able to manage their margins better than the market expects. 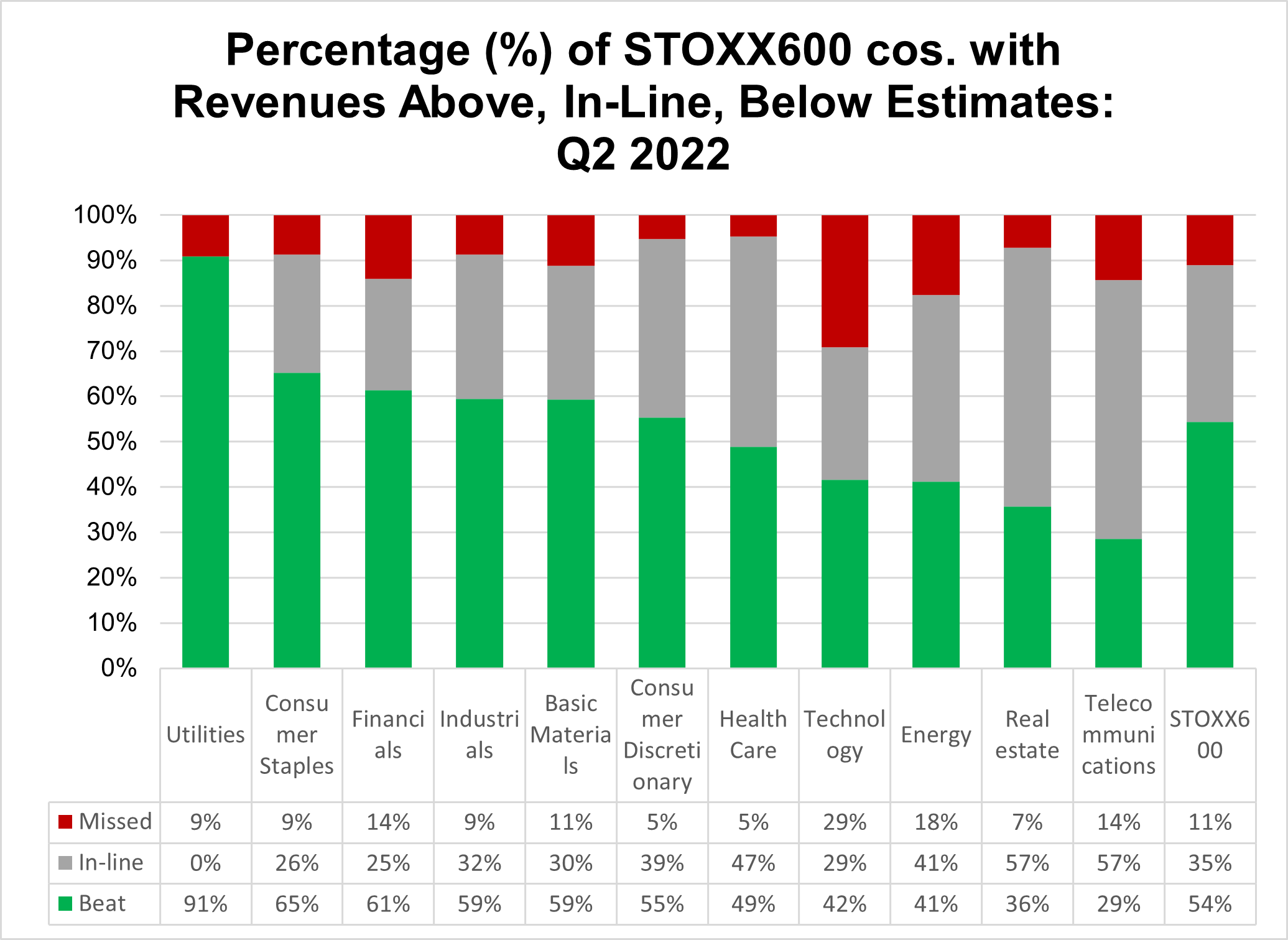 Companies, on aggregate, reported a higher revenue beat than the historical average. 54% of companies beat revenue expectations compared to the historical average of 39%. We continue to see a trend toward lower expectations as in-line continues to be lower than that of pre-pandemic levels. As we saw in both the second and fourth quarters of 2020, companies continue to perform better than what analysts are expecting, driven by continued cautious estimates from analysts as well as modest company guidance. 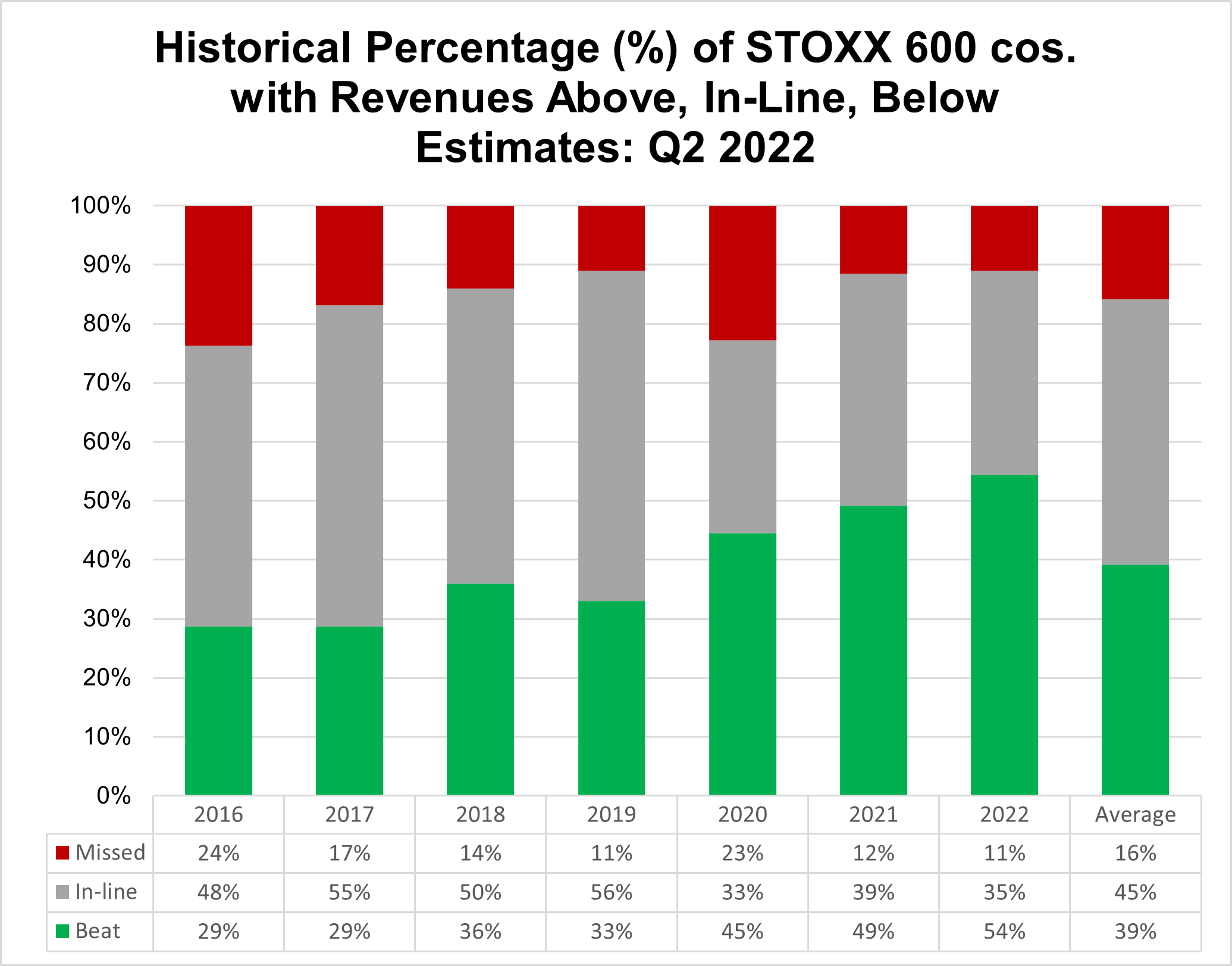 Analysts are ramping up earnings estimates for CY22, with the market now estimating 23% earnings growth for the year compared to only 10% back in March, driven by strong earnings growth for the Energy and Telecommunications sectors. Real Estate and Financials are the two sectors where analysts are expecting declines for the year, with expectations for 16% and 6% contractions, respectively. Basic Materials was predicted to report a 8% negative earnings growth back in March. However, analysts are now estimating a 7% increase instead. We see a similar trend on the revenue front, analysts have become more optimistic, increasing their revenue growth estimates from 8% in March to 17% revenue growth currently. As with earnings, the Energy sector is the driving force with analysts now expecting 53% revenue growth for the sector compared to 34% in March. Analysts are continuing to raise their estimates as the year progresses, which is what we saw 12 months ago, for 2021 as well. With Europe going into the second half of the year with increasing energy prices and inflationary pressures, we look forward to seeing how the second half of the year develops.

Given continuing concerns in the market about a possible recession, are analysts lowering EPS estimates more than normal for S&P...

Each week, Earnings Insight offers analysis of critical trends in the S&P 500. The following easy-to-digest infographic...

At this late stage of the Q3 earnings season for the S&P/TSX Composite, the number of companies reporting a positive earnings...