In 1995, FactSet opened an office in Tokyo, Japan, officially establishing presence in the Asia Pacific region. Over the last 25 years, we have continued expanding our footprint in the region; today we have a total of 12 offices across Australia, China, Hong Kong, India, Japan, Philippines, and Singapore.

The last two and a half decades have witnessed a lot of changes in the region, both economic and political. Let’s examine some of the events that have shaped the Asia Pacific region since 1995.

Just like FactSet did in 1995, let’s start with Japan. The Japanese economy has been on a bumpy ride over the last 25 years, enduring six economic recessions during that time. The economy was viewed as an economic powerhouse in the 1980s with annual growth averaging 4.5% per year. But this rapid growth led to an asset price bubble by the end of the decade; when the bubble burst in 1991, the country entered what is now referred to as the “lost decade.” Economic growth, which averaged 4.5% per year in the 1980s, averaged just 1.6% in the 1990s; over the last 25 years, the economy has averaged annual real GDP growth just below 1.0%. In 1995, Japan had the world’s second-largest economy as measured by nominal GDP in USD; by this measure, the economy has shrunk over the last 25 years and has now fallen to number three in the world, behind the U.S. and China. 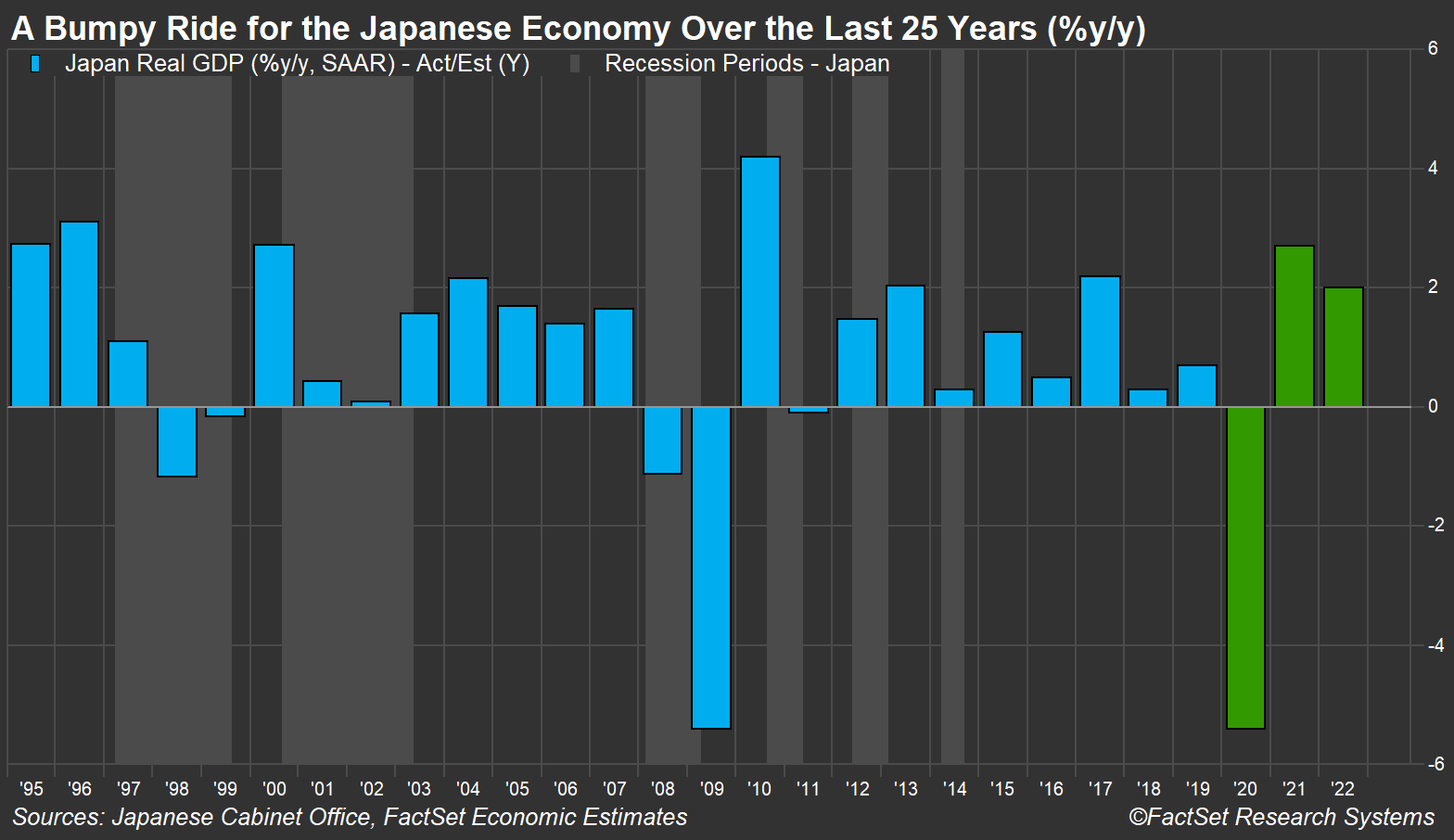 As the country fell into a cycle of low growth and chronic deflation, a series of economic stimulus measures have led to a ballooning of Japan’s budget deficit and government debt. Japan has had 12 prime ministers over the last 25 years, all of whom have endeavored to find solutions to the country’s economic problems, with little success. Prime Minister Shinzo Abe (2006-2007, 2012-2020), who was the longest-serving prime minister in Japanese history, implemented a range of economic policies referred to as “Abenomics.” The three “arrows” of Abe’s reform strategy were monetary expansion, fiscal stimulus, and structural reforms.

But government stimulative policies have often been at odds with efforts to balance the budget and growth continued to stagnate. Japan’s policy rate fell below 1.0% in the mid-1990s and has remained there ever since; in fact, the Bank of Japan has maintained its key policy rate at -0.1% since early 2016. Unfortunately, 2020’s COVID-19 global pandemic has dealt the Japanese economy another blow with the economy projected to contract by 5.4% for the year.

On the other hand, the Australian economy saw nearly uninterrupted economic growth over the last 25 years. After suffering a recession in the early 1990s, the economy entered what would become the longest economic expansion on record for a developed country. However, Australia’s record 29-year economic expansion came to end in 2020 as the economy shrank in the first two quarters of the year as a result of the COVID-19 pandemic.

The resilience of the Australian economy is largely due to its diversification. The continent is rich in natural resources and its major exports include energy, mineral, and agricultural commodities. Yet the economy is dominated by its service sector, led by the finance and insurance industry.

Australia has also cultivated its relationships within the Asia Pacific region. Over the last 25 years, the country has negotiated several free trade agreements (FTAs) within the region, including FTAs with China, Hong Kong, Japan, Malaysia, Singapore, South Korea, and Thailand. Back in 1995, the U.S. was Australia’s second-biggest trading partner behind Japan, with the UK and Germany also making the top 10. Fast forward to today, where China is by far Australia’s biggest trading partner, representing nearly one-third of total trade; the top 10 list today is now largely dominated by other Asia Pac countries with increased shares for India, Malaysia, and Thailand.

The engine of growth for the entire region has been China. The Chinese economy has surged over the last 25 years to become the second-largest economy in the world (in terms of nominal GDP in USD), as noted above. After peaking at 14.2% in 2007, real GDP growth has eased over the last 10 years; however, this is largely by design. As the economy has shifted from an investment-driven to a consumption-based model, officials in Beijing have repeatedly stressed that lower growth rates were probable during this period of transition.

While the Chinese economy is expected to see its real GDP growth slow from 6.1% in 2019 to just 2.0% in 2020 as a result of the COVID-19 pandemic, it is one of the few bright spots in the region. After reporting a sharp economic contraction in the first quarter of 2020, the economy rebounded strongly in the second quarter, indicating a V-shaped recovery. China’s demand for global goods might also help the recovery of the global economy in general, and the Asia Pacific region in particular. 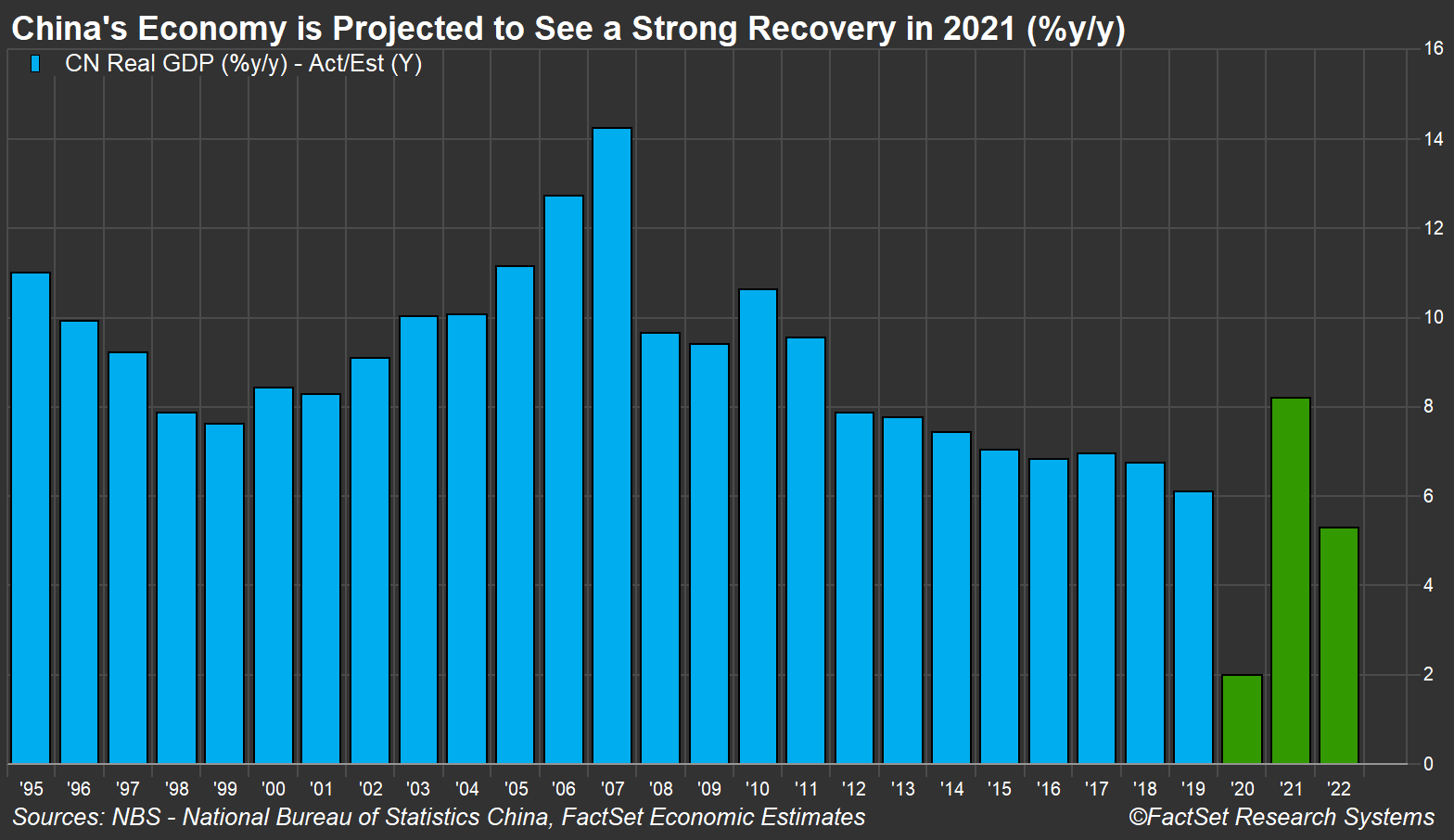 Because of China’s rapid growth, the rest of the Asia Pacific countries have become highly dependent on China for trade. In fact, China is the primary export destination for much of the region and the economic ties in the region continue to strengthen. Just last month the ASEAN member states, Australia, China, Japan, New Zealand, and South Korea signed on to the Regional Comprehensive Economic Partnership (RCEP). According to the ASEAN press release, “The RCEP marks ASEAN’s biggest free trade pact to date, covering a market of 2.2 billion people with a combined size of US$26.2 trillion or 30% of the world’s GDP.”

While the last 25 years have witnessed somewhat uneven economic performance across the Asia Pacific region, the 2020 COVID-19 global pandemic was universally damaging to the region’s economies as well as the rest of the world. But because the countries within the region have strengthened their economic ties in recent years, there is renewed optimism that the Asia Pac economies will emerge from the current downturn stronger than ever.

As FactSet celebrates the 25th anniversary of our Tokyo office, we look forward to the next quarter century and what it will bring for the Asia Pac region and our clients.