On October 8, 2015, California Governor Jerry Brown signed Senate Bill 185 into law by requiring the state’s two public pension funds, CalPERS and CalSTRS, to divest their investments in coal companies that derived at least 50% of their revenues from thermal coal. CalPERS is the nation’s largest pension fund, managing close to $300 billion in assets, and the signing of this bill could indicate a trend wherein pension funds look to better align their investment policies with the overall social movement toward reducing carbon emissions. In June, Norway’s parliament also endorsed the divestment of coal companies from its $900 billion sovereign wealth fund (SWF) – the world’s largest SWF by assets. Simply put, investors need to be aware of companies with exposure to the coal business. The challenge lies in identifying these companies.

Conventional industry classification systems can be been used to identify coal-exposed companies, but they’re limited both in scope and depth. For example, companies that receive less than 50% of their revenues from coal will not be captured; moreover, companies are not differentiated into more granular levels, such as thermal or metallurgical coal. But using FactSet Revere Industry and Sector Classifications, we can address both of these shortcomings by using highly specific industry categories and granularity to map companies on a multi-dimensional level, including their primary and ancillary businesses.

Using FactSet Revere, we applied several coal exclusionary filters to backtest the performance impact on the Russell 3000 for the past five years. The below results are based on returns from October 15, 2010 through October 15, 2015. Returns are based on total returns, including dividends reinvested. 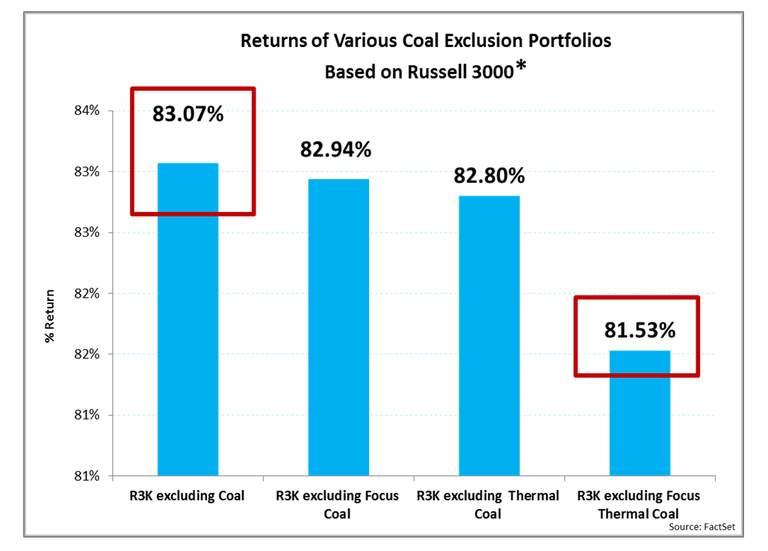 Shown above are the results for four exclusionary portfolios: In these portfolios, we excluded:

In addition, all four exclusionary portfolios outperformed the Russell 3000 (equal-weighted and rebalanced annually) in the past five years.

Excluding coal companies in the Russell 3000 for the past five years appeared to be performance enhancing, even when a more restrictive thermal coal exclusionary filter was applied.

Mr. Jeremy Zhou is Vice President, Head of Indexing Solutions at FactSet. In this role, his main responsibilities include alternative data sourcing, index creation and partnership, and investment strategy consulting. Prior to joining FactSet in 2013, he was a senior executive with Revere Data—a leading alternative data firm acquired by FactSet—and held positions as Head of Index Solutions, Associate Director of Product Strategy, and Director of Healthcare Equity Research. From 2011 to 2013, he was also a Portfolio Manager for Covestor Ltd.—now part of the Interactive Brokers Group. Mr. Zhou earned a Master of Public Health and a B.S. in Nutrition and Toxicology from the University of California, Berkeley. He is also a CFA charterholder and a member of the CFA Society San Francisco.

While our analysis shows that greater leverage has been correlated with higher levels of risk over the last 20 years, European...

The Future of Risk Technology

Looking Back at Market Environment Factor Research in 2020

In rapidly changing markets, leveraging any static factor strategy throughout is unlikely to perform well. A strategy must adapt...

FactSet has partnered with the CFA Institute and ACA Performance Services to answer questions from the global financial community...