Illinois-based industrial equipment manufacturer Caterpillar has long been considered a bellwether of the global economy because of its role as a supplier of key industrial equipment and its broad exposure to global markets. How are the U.S.-China trade war and the prospect of slowing global growth impacting the company’s outlook?

Weak Global Demand Led to a Contraction in 3Q Revenue

In Caterpillar’s 3Q 2019 earnings call, the company announced a 6% year-over-year drop in sales and revenues for the third quarter, the first quarterly decline in nearly three years. CEO Jim Umpleby attributed the decline to a sharp reduction in dealer inventories in anticipation of lower end-user demand. The company also cut its forecasts for 2019 annual results based on an assumption of continued reductions in dealer inventories and flat customer demand through the fourth quarter.

Umpleby cited “uncertainty in the global economic environment” as the primary reason for the increased caution exhibited by both dealers and end-users. Caterpillar breaks down its revenue into four regions: North America, Latin America, EAME, and Asia Pacific. In the third quarter, only Latin America saw an increase in sales and revenues; however, this region accounts for less than 10% of CAT’s total revenues. Sales in the Asia Pacific region shrank by 14% during the quarter, which includes a 29% plummet in sales to construction industries. Umpleby noted that the weakness in the Asia Pacific is outside of their main markets in China and Japan. 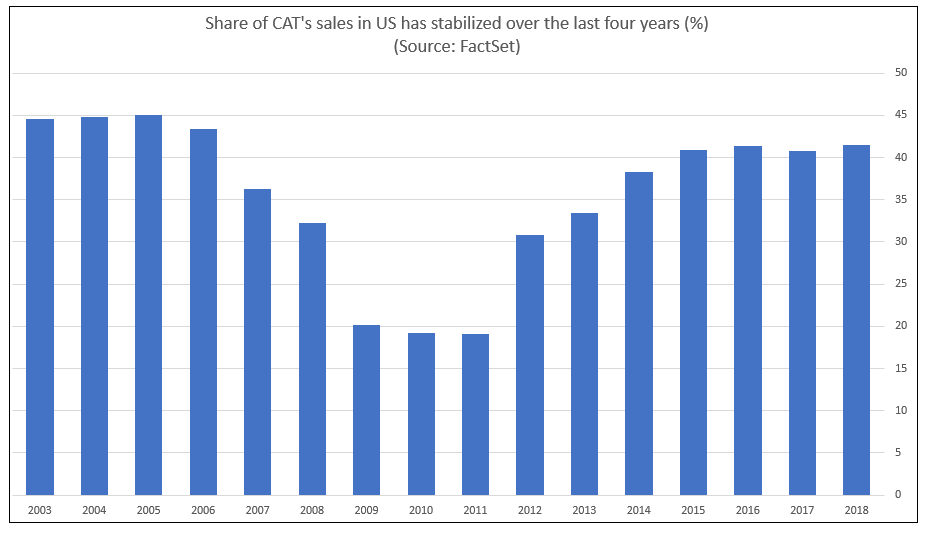 Tariffs and Trade Wars Are Bad for Global Growth...and Caterpillar

Caterpillar’s results confirm the most recent global analysis from the International Monetary Fund (IMF). The IMF’s October World Economic Outlook shows global GDP growth slowing from 3.6% in 2018 to 3.0% in 2019 and 3.4% in 2020; these projections are significantly lower than the organization’s July’s interim projections. A 3.0% growth rate would be the slowest global growth since the 2008-2009 global economic slowdown. According to the IMF, risks to the global growth outlook skew to the downside as trade barriers and heightened geopolitical tensions disrupt global supply chains and hamper confidence, investment, and growth. This is a negative sign for Caterpillar and other global companies.

Persistent alarmist news about tariffs and potential trade wars over the last two years has hurt CAT’s stock. After peaking in early 2018, we have seen a general downward movement in Caterpillar’s stock price (CAT), characterized by dramatic swings in response to news events including the imposition of tariffs on steel and aluminum imports as well as the ups and downs of the U.S.-China trade war. CAT is one of the 30 companies in the Dow Jones Industrial Average and every time it moves, it brings the entire index with it. As of October 28, CAT is down 18% from its January 22, 2019 peak ($170.89). 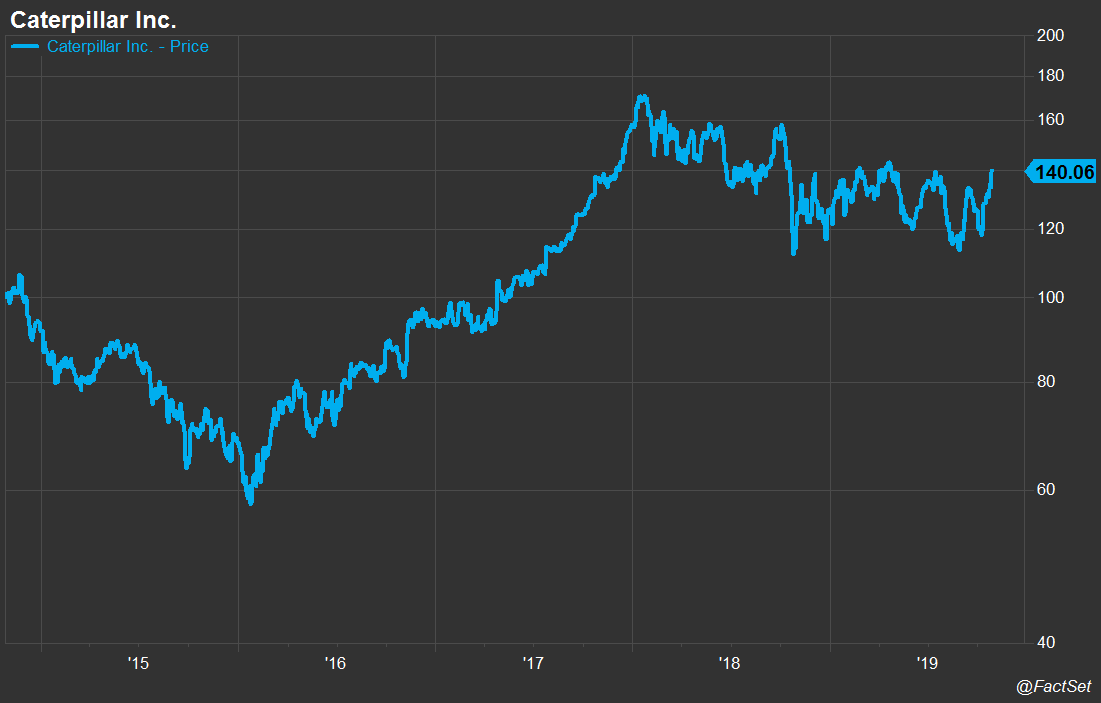 In 2018, foreign sales accounted for 58.5% of CAT’s total revenue, but this statistic only gives you part of the story. In Q3 2019, 21% of Caterpillar’s revenue was generated in the Asia Pacific region; in fact, FactSet estimates that 5.1% of total revenue is from China. After the United States and Canada, China is the company’s third-biggest market. 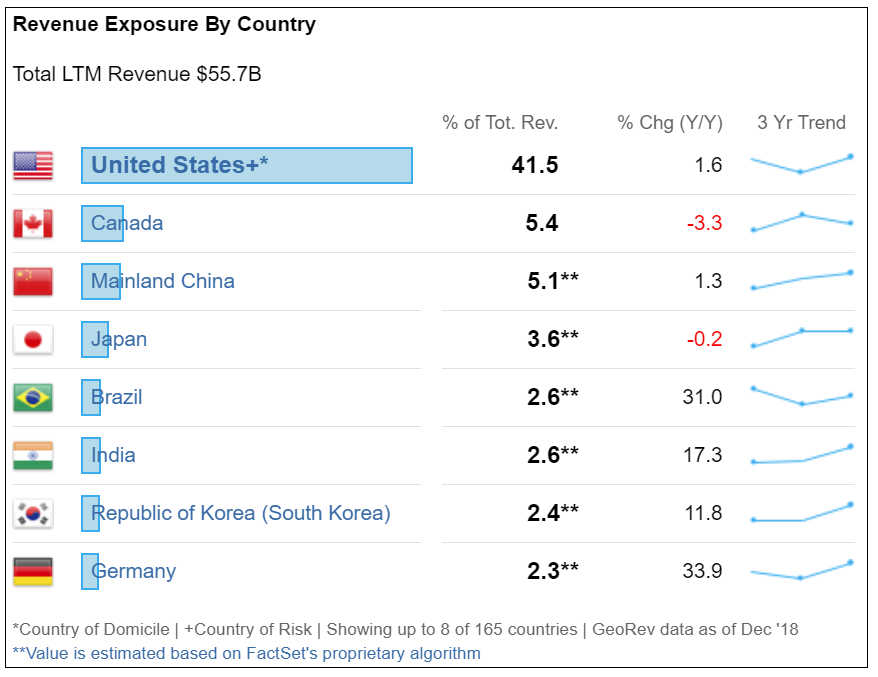 We can take this global analysis even further. By extracting relationship disclosures from thousands of companies worldwide, FactSet has identified 159 suppliers, 65 customers, and 27 partners that do business with Caterpillar, representing 38 countries around the world. Digging deeper into these numbers, 60.4% of suppliers, 62.5% of customers, and 66.7% of partners are located outside of the United States. Caterpillar has developed a truly global supply chain.

In addition, the company employs thousands of people around the world. According to Caterpillar, the company serves 193 countries through its dealer network. The company’s 2018 annual report states that, “we employed about 104,000 full-time persons of whom approximately 59,400 were located outside the United States.”

Will Caterpillar Be Able to Weather This Storm?

For a company selling large, expensive industrial machinery both domestically and abroad, a global slowdown in industrial activity is a concern. However, Caterpillar and its leadership are well-known for their ability to successfully navigate through troubled economic conditions. Despite the weak third quarter performance and downgrade to the outlook, Caterpillar saw a 1.2% increase in its stock price when it released 3Q earnings on October 23. Analysts appear to have been reassured by the company’s continued strong margins and focus on its cost structure. Undoubtedly, this global powerhouse will find a way to persevere despite growing business obstacles, but the next couple of years are likely to be challenging.

This article was first published on July 3, 2018. The data and commentary have been updated as of October 29, 2019 to reflect recent events.