Six months ago, we highlighted data showing that the eurozone appeared ready to emerge from the economic doldrums. Since then, the outlook for Europe as a whole has improved even more and growth projections have risen accordingly, with just a handful of exceptions, including the United Kingdom.

The October 2017 World Economic Outlook (WEO) publication from the International Monetary Fund (IMF) showed a continued acceleration in global growth in 2017 and 2018, largely led by upward revisions for the euro area. The IMF now projects that the euro area will grow 2.1% in 2017 and 1.9% in 2018, compared to the April 2017 projections of 1.7% and 1.6%, respectively. The organization attributes the higher growth to “an acceleration in exports in the context of the broader pickup in global trade and continued strength in domestic demand growth supported by accommodative financial conditions amid diminished political risk and policy uncertainty.” 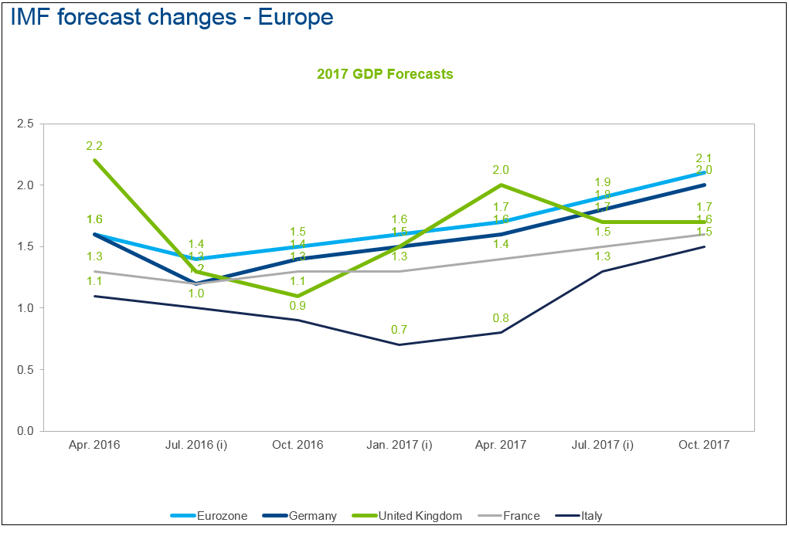 The growth acceleration in the euro area is visible in the recent quarterly and monthly economic statistics. Last week, Eurostat announced that eurozone real GDP grew 0.6% in the third quarter of 2017 compared to the second quarter. On a year-over-year basis, the economy was up 2.5%, the fastest quarterly year-on-year growth rate in 6.5 years. In addition, last week’s monthly trade numbers continue to show strong global and domestic demand; in September, exports were up 5.6% from a year ago, while imports were up 5.1% (not seasonally adjusted basis).

Interestingly, the majority of eurozone countries are projected to grow faster than the region as a whole. However, the three largest countries in the monetary union, Germany, France and Italy, all have 2017 forecasted growth rates below the aggregate number (2.0%, 1.6%, and 1.5%, respectively). Nevertheless, all three of these countries have seen their outlooks improve significantly from the April publication, when the IMF was forecasting 1.6% growth for Germany, 1.4% for France, and 0.8% for Italy. These countries have all seen steady gains in their quarterly economic performance over the last three years and especially in 2017; in fact, similar to the eurozone aggregate, each country’s 3Q 2017 real GDP growth was the fastest quarterly year-on-year growth since 2011.

Brexit Continues to Weigh on the United Kingdom

After seeing annual GDP growth slow in 2016 to 1.8%, the IMF is projecting that the UK’s growth rate will continue to decelerate in 2017 and 2018, slowing to 1.7% and 1.5%, respectively. The main reason for this slowdown is Brexit. As negotiations drag on, economic uncertainty is depressing sentiment among both consumers and businesses, compounding the fact that a weak pound has led to a surge in domestic inflation, depressing the purchasing power of consumers. According to the IMF, “The medium-term growth outlook is highly uncertain and will depend in part on the new economic relationship with the EU and the extent of the increase in barriers to trade, migration, and cross-border financial activity.”

Risks to the Forecast

While the economies in the euro area have benefited from an uptick in both domestic and global demand, there are risks to the medium-term outlook. For advanced economies in general, the IMF points to slow productivity growth and aging populations as two major challenges to future growth potential. In addition, the debt overhang in some euro area countries could pose significant risks if there is a shift toward tighter monetary policy from the European Central Bank.