Currency shocks can shock your performance

News of the Swiss National Bank unpegging the Swiss Franc from the Euro took the world by surprise earlier this year. Among other side effects, this move from the SNB hurt Swiss companies that rely on sales to other countries in the Eurozone as the cost of Swiss goods and services skyrocketed with the exchange rate. Attention has now turned to other countries with Euro-pegged currencies that might follow suit, with the Danish Krone being of particular concern. We examined a sample European Large Cap portfolio benchmarked against the MSCI Europe Large Cap Index to identify the portfolio’s true exposure to revenues from the Eurozone and evaluate the potential impact of a major currency shock. Using FactSet GeoRev data, we uncovered an exposure of over 20% to the Eurozone, based on the revenue stream of the companies we own. This represents a material portion of our portfolio that is susceptible to changes in revenue coming from the Eurozone. 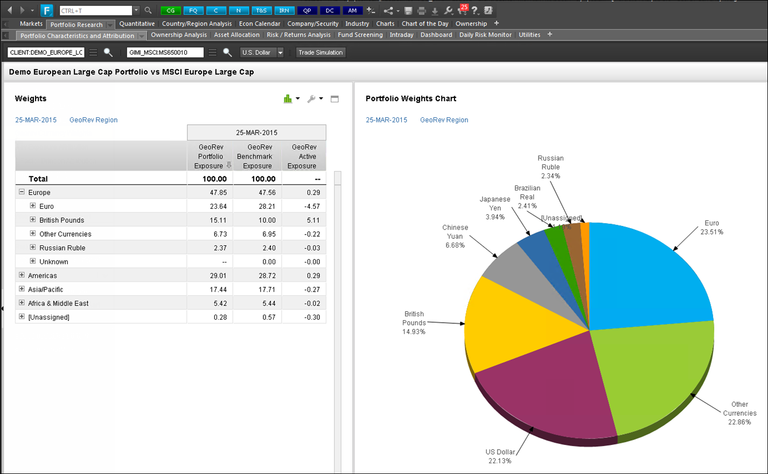 Next we examined securities by levels of exposure to the Eurozone and applied Stress Testing to evaluate the sensitivity of each group to a drastic shift in the DKK/EUR exchange rate.

If the Danish Krone is unpegged from the Euro, and as a result the DKK/EUR exchange rate declines sharply, our portfolio would decline 1.98%. Considering active return, the portfolio actually outperforms by 7 bps relative to the MSCI Europe Large Cap. As one might predict, groups at all levels of exposure take a hit under this scenario. Contrary to expectations, however, our holdings with less revenue exposure to the Eurozone seem to be the most susceptible to negative movement of the exchange rate. Likely driven by our relative underweight, the 20-40% exposure group detracts the most from our active performance. A more striking result may be the highest positive active return contribution of 10 bps from the 40-60% exposure group, given a very small active weight. This result could signal other biases (e.g., sector, industry) influencing performance in this group.

From here we can examine how sector, valuation, or other group bets might be driving the sensitivity to the Eurozone and potential exchange rate movements. With the rise of the dollar also playing a large role in the shape of the European economy, perhaps investigation into USD exchange rate movements could be a next step of analysis.