Do Companies Perform Better When they Invest in Themselves?

Introduced on September 27, the Trump administration’s tax reform plan proposes lowering corporate tax rates to 15% (down from the current 35%) and issuing a tax holiday for U.S. corporations to encourage them to bring their outstanding cash reserves back to domestic soil. While this proposed legislation is still under consideration, it is imperative to grasp the impact this plan will have on various cash usage strategies and equity returns over time. In a recent interview, Gregg Lemkau, Co-Head of Global Investment Banking at Goldman Sachs, stated, “We’d expect to see a repatriation of overseas cash into the U.S. as part of any tax reform, and that should drive M&A activity.” While this is one likely outcome, there are other ways companies could make use of this newfound cash.

The three top cash positions in the S&P 500 (Apple, Microsoft, and Berkshire Hathaway) amount to a combined $450 billion (close to the GDP of Belgium, according to data from the International Monetary Fund). Apple alone is sitting on a cash sum the size of Finland’s GDP. As we see, S&P 500 aggregate cash balances have been increasing over the past 10 years, reaching new highs in 2017.

Our hypothesis is that when companies focus on investing in themselves to generate organic growth rather than influencing shareholder value (through dividends or buybacks), they tend to perform better. To test this theory, we have taken the S&P 500 and back-tested cash usage factors over the past 10 years.

To test this analysis, we used a factor model observing R&D expense, debt reductions, net cash flow from investing activity, dividends paid, and share buybacks. Sector bias was removed from the model via layered factors. We also created two multifactor ranks based on all cash usage related to company investment and shareholder value. Company investment consists of R&D expense, long-term debt reductions, and net cash flow from investing activity. Shareholder value consists of share buybacks and dividends paid. By testing the individual factors in addition to the multifactor ranks, we were able to observe clear trends in performance related to cash use.

The chart below plots the cumulative returns for the observed period for the various factors adjusted for sector bias, as well as the multifactor ranks. Multifactor ranks aside, the individual factors performing best were R&D expense and long-term debt reductions. On the other hand, dividend payment and stock repurchases caused the largest underperformance over the observed timeperiod.

The two figures below show the quintile active returns for the two multifactor ranks over the past 10 years. Companies that paid out the lowest amount of dividends per share influenced the shareholder value factor’s bottom quintile the most. Company investment was helped considerably by high R&D expense returns. 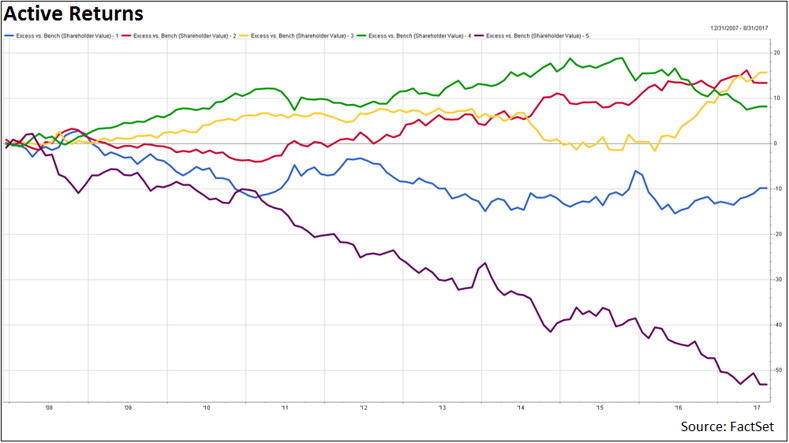 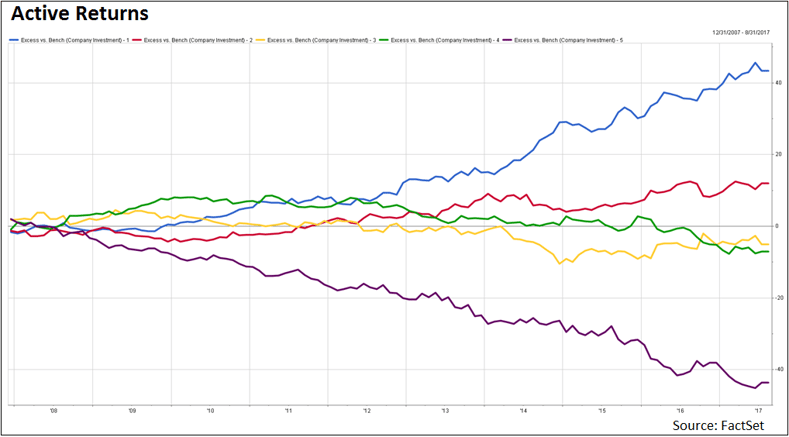 In the chart below, we isolated the active returns for company investment and shareholder value factors and observed a definitive outperformance for internal company investment. The multifactor rank’s information coefficient sits at .016, indicating a fair measurement of predictability. The information coefficient is the correlation between the factor rank and the return rank for all companies in the universe for a specific period. Though the coefficient is based on a scale of -1 to 1, the value depends on the size of the universe. For a massive universe like this, 0.016 indicates a strong correlation. The figure also shows that shareholder value’s cumulative active return is 49% of the company investment factor’s return.

If this tax reform plan pans out, corporations that use their repatriated assets to influence organic growth via internal investments should expect more material gains than those that distribute to shareholders in the form of buybacks and dividends.

It became a common theme post-2008 that VaR is not able to capture extreme events. This is only true if VaR is assessed based on...

In this article, we will address some policy changes related to the U.S. mortgage market and our model changes as well as a few...

Be Aware, Adapt, Innovate--or What We Learn from Mandelbrot, Noah, and Covid-19

A year before the breakout of COVID-19, I published an article which discusses how to transform investment uncertainty and risks...

In recent months, the market has seen a massive uptick in volatility. When just looking at the VIX, which is a measure of...