Last month, the International Monetary Fund (IMF) released its latest global economic projections, showing a continued acceleration of growth in 2017 and 2018. In its World Economic Outlook (WEO) publication, the organization revised its forecasts upward and is now forecasting 3.6% global growth in 2017 and 3.7% growth in 2018. According to the IMF, “With growth outcomes in the first half of 2017 generally stronger than expected, upward revisions to growth are broad based, including for the euro area, Japan, China, emerging Europe, and Russia. These more than offset downward revisions for the United States, the United Kingdom, and India.” Growth in China and India leads the Asia Pacific region, and even though Japan’s growth trails the rest, that country’s outlook has actually improved significantly over the last few IMF forecast publications. 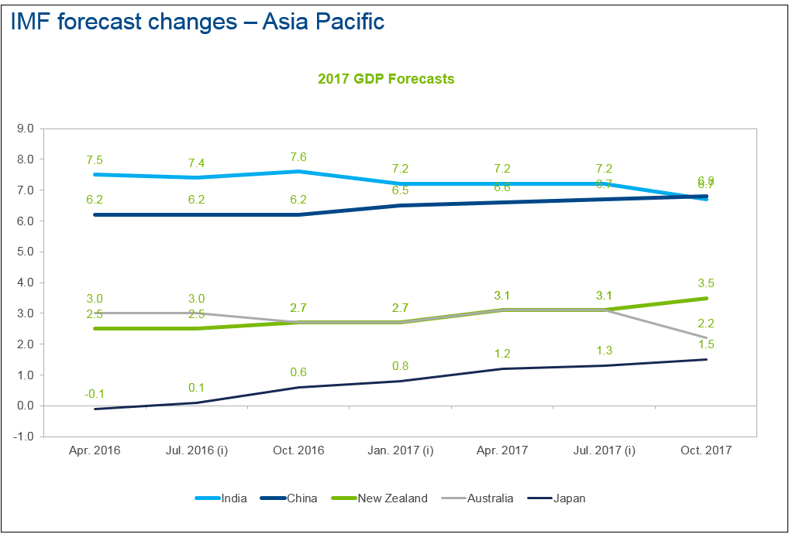 The IMF has consistently raised its growth forecast for Japan over the last year and a half. In April 2016, the WEO outlook for 2017 GDP growth was dismal, predicting a 0.1% contraction. However, in the latest forecast, the IMF now projects 1.5% growth, the country’s best annual economic performance since 2013. The uptick in growth is the result of improved domestic and global demand. Domestically, growth has been supported by stimulus on both fiscal and monetary fronts, representing two pillars of “Abenomics,” the economic policy of Japan’s Prime Minister Shinzo Abe. However, the economy’s performance has been hesitant at times, forcing Abe to delay the implementation of a planned 2017 consumption tax increase until 2019. These positive factors are expected to ease in 2018, with growth projected to slow to just 0.7%. According to the IMF, a shrinking labor force will continue to depress Japan’s growth prospects in the medium- to long-term.

The China forecast has also been revised up significantly over the last several quarters. Economic growth in China is now expected to show a slight acceleration in 2017 from 2016, with growth increasing from 6.7% to 6.8%. In the April 2016 WEO outlook, the IMF was projecting growth to slow to 6.2% as the result of an anticipated unwinding of excess capacity in the real estate and manufacturing industries. An expansionary government policy mix has spurred higher-than-expected growth this year, but this stimulus appears to be fading since the official annual growth target of 6.5% is almost assured at this point. Recent monthly data shows a moderation in activity—October industrial output was 6.2% higher than a year earlier, below FactSet estimates for a 6.3% expansion and down from September’s 6.6% increase. In addition, fixed asset investment for the first 10 months of the year was up 7.3% from a year ago, down from the 7.5% increase seen for the January-September period and the 9.2% growth for the first three months of 2017. The IMF outlook projects that China’s 2018 growth will slow to 6.5%, with the biggest risk to the outlook coming from high levels of nonfinancial debt.

While the outlooks for Japan and China have improved in recent quarters, the IMF has revised down its forecast for India. In the April 2016 WEO, the IMF analysis pointed to strong private consumption and investment as the factors driving their optimistic 7.5% growth forecast for the 2016-17 fiscal year. However, the forecast has now been revised down to 6.7% due to the ongoing disruptions caused by the surprise demonetization introduced in November 2016 and the launch of the new national Goods and Services Tax (GST) in July of this year. The GST was an effort to replace various state and federal tax with a unified tax system, but businesses have complained that the tax increases their administrative burden. In response, just this month the Indian Finance Minister announced that the government would be lowering the tariff on many everyday items. Despite the short-term economic pain caused by these two events, the IMF remains confident that India’s ongoing structural reforms will have positive economic impacts in the medium term, with growth projected at 7.4% in 2018 and gradually moving above 8% further out.

Other Asia Pacific Economies Get a Boost

Across the rest of the emerging and advanced economies in the Asia Pacific region, stronger demand globally and specifically from China has helped to boost economic growth projections for 2017 and 2018. As a group, the Emerging and Developing Asia countries are projected to grow by 6.5% in 2017 and 2018, largely driven by China and India. Among the ASEAN-5 economies (Indonesia, Malaysia, Philippines, Thailand, Vietnam), growth will pick up from the 4.9% rate seen in 2016, to 5.2% in both 2017 and 2018.

Growth will be considerably slower for the advanced economies in the region, but most countries will see an acceleration from 2016. The IMF is forecasting 2017 growth of 3.5% for Hong Kong, 2.5% for Singapore, 3.0% for South Korea, 2.0% for Taiwan and 2.2% for Australia; with the exception of Australia, these are all increases over the 2016 growth rates. Australia will see a pickup in 2018, while the rest of these countries will see flat or slower growth.

Risks to the Forecast

One of the biggest reasons for the IMF’s positive global outlook for 2017 is the renewed economic strength in China. However, a sharp growth slowdown in the world’s second largest economy would have adverse repercussions globally, and particularly for Asia’s emerging markets. Some of the other risks highlighted by the IMF include rapidly tightening global financial conditions, persistent low inflation, and an inward shift in policies. From the IMF’s perspective, “risks to growth in the medium term are still skewed to the downside,” and the organization cautions that policy missteps could erode market confidence and reduce financial stability around the world.