Since the beginning of 2020, the COVID-19 pandemic has affected economies and markets across the globe. In both developed and emerging countries, we saw GDP growth rates plummet in early 2020 and fiscal deficits surged. How did governments in emerging market economies respond and how did this response affect their sovereign credit risk? We analyzed the relationship between the yields in the emerging markets sovereign USD-denominated debt space and the fundamental concepts that we believe drive the sovereign credit risk premia.

For our analysis, we selected 15 emerging countries that would give us broad global geographical coverage: Brazil, Chile, Colombia, Egypt, Hungary, Indonesia, Israel, Mexico, Peru, Philippines, Turkey, Poland, Russia, South Africa, and South Korea. For these countries, we used hard currency USD-denominated government bonds with fixed-rate coupons and remaining maturity of at least 10 years as of December 2013. We chose this maturity to simplify our analysis; we found that the results and conclusions remain unaffected when compared to using other maturities.

Sovereign credit risk has a large influence on an economy and the yields at which governments can issue new debt. The goal of our model is to explain the overall cross-sectional variation in these yields, which is composed of exposure to the Treasury market and country credit risk dynamics. We did this using both bond- and country-specific features in the model.

Credit ratings are usually calculated using a combination of objective and subjective factors, but the exact methodology and factors remain unknown. Here we propose a new approach: by using machine learning models (random forest) and the SHAP python package for explanations of these models, we can verify our hypotheses for the risk factors and then quantify the country’s credit risk. Random forest is a machine learning method based on the ensemble learning technique, using regression analysis to fit multiple decision trees. SHAP (SHapley Additive exPlanations) is based on game theory and is used to explain machine-learning models. We developed our own framework based on this approach, allowing us to capture the nonlinear patterns in the data and build a sovereign credit risk model. Our model is a numerical representation of the economic stability or the relative immunity to economic fluctuations.

Our machine-learning framework helps us verify the following assumptions:

We calculated SHAP values for every variable used in the random forest regression models to isolate their effects. We observed clear patterns for the GDP growth, inflation, fiscal deficit, current account, short-term-debt-to-FX-reserves ratio, and institutional strength factors, and those patterns allow us to prove the assumptions outlined above. The most important and second most important variables are inflation and the short-term-debt-to-FX-reserves ratio, respectively. Better performance for either variable (meaning lower absolute values) is associated with an increase in the country’s credit rating, which is in line with economic theory.

Sovereign credit risk premia are calculated by summing the country-specific SHAP values for every yield prediction in our universe; this tells us how much those features affect our prediction and in which direction. The next step is to group the results by country of domicile, calculate the median, and inverse the sign. Having a higher sovereign credit risk premium means lower (negative) contribution for those factors to the yields as shown in the next two exhibits.

The heatmap above illustrates the dynamics of our sovereign credit risk premia between January 2020 and October 2020. March 2020 stands out as this is when Israel and South Korea increased their scores compared to February by 60% and 55%, respectively, while Turkey and Egypt have lower scores of -15% and -38%, respectively. Since the yield base value for the month is the same we can conclude that macroeconomic stability is a key factor in times of recession.

We can now take the best two and the worst two countries from our dataset and plot variations in their credit risk premia over time. As shown in the chart below, the top two countries (Israel and South Korea) before the pandemic increase their credit risk premia, while the worst two (Turkey and Egypt) have even worse scores. The economic stability or the relative immunity to economic fluctuations is better for countries that have better fundamentals with higher probability for debt payments. These countries remain relatively unaffected in the event of economic recession.

Our machine learning model for March 2020 has feature importance as follows:

In the charts below, we consider two sample bonds issued by the two countries with the highest and lowest sovereign credit risk premia: Israel and Egypt. These charts show how each feature contributes to pushing the model output from the base value (the average model output) to the model output. Features pushing the yield prediction higher are shown in green, those pushing the prediction lower are in red.

Knowing that inflation and short-term-debt-to-FX-reserves ratio are the two most important features in our machine learning model, accounting for a total of 57.8% of the yield predictions, we can analyze these results. As of March 2020, Egypt’s inflation rate was 7.319% while Israel’s was 1.058%; the median inflation rate for our universe of countries is 3.375%. Our prior assumption is verified here: higher inflation leads to higher yields. The Israeli inflation contribution to the base yield value is -1.0326%, while Egyptian inflation contributes +1.5885%. The short-term-debt-to-FX-reserves ratio has a median value of -0.085 (Israel: -0.036, Egypt: -0.483), which leads to a contribution in the Israeli and the Egyptian bonds of -0.4011% and +1.0903%, respectively.

We can incorporate our sovereign credit risk premia methodology into portfolio analysis. We used this risk metric as our primary universe filter in two portfolios. The first portfolio has constituents from the two countries with the lowest sovereign credit risk premia: Turkey and Egypt (10 bonds in total). The second portfolio includes bonds from the top two countries: Israel and South Korea (six bonds in total). We use slices of our initial universe and equally weight the constituents in each portfolio. 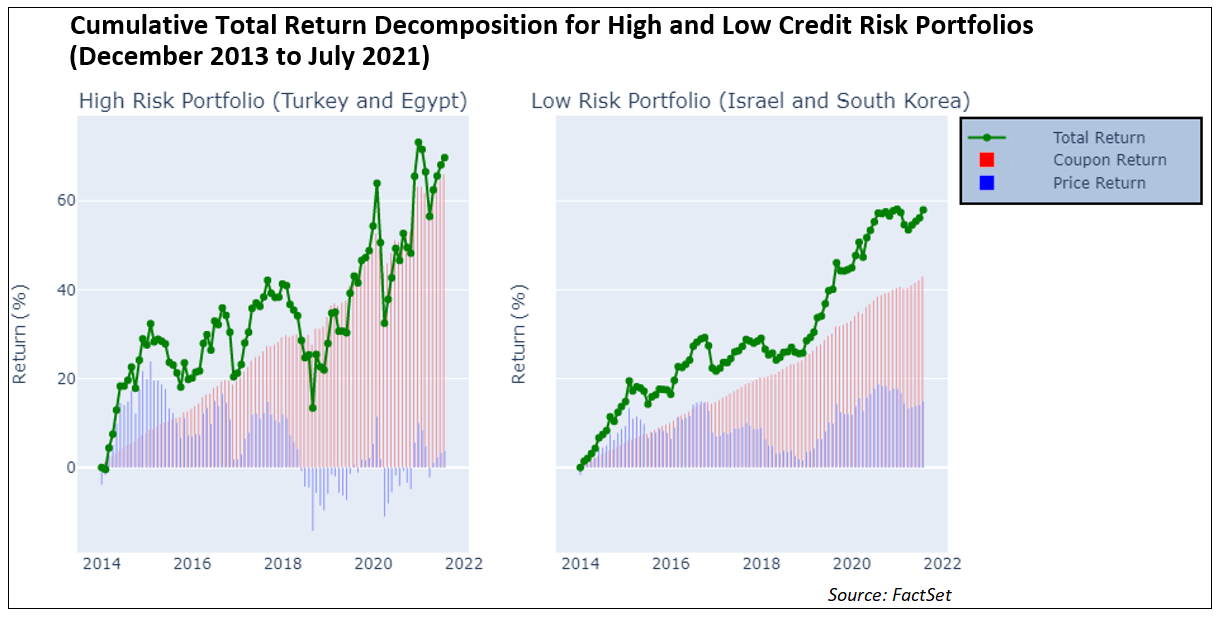 In the charts above, we analyze the performance of the two portfolios between October 2013 and July 2021. Note the February to March 2020 period (the beginning of the COVID-19 global pandemic), where in the top plot we notice a remarkable drawdown (35.06%) in the cumulative total return for the high sovereign credit risk portfolio, caused mainly by the negative price return. For the same period, our low sovereign credit risk portfolio has a drawdown of 7.12%.

We leveraged machine learning techniques to build a framework that provides investors both with a real-time and timely assessment of credit risk dynamics in emerging market sovereign debt and an in-depth view of main structural drivers that account for market perceptions of the creditworthiness of sovereign debt issuers.

Emil Margaritov and Georgi Mitov also contributed to this article. 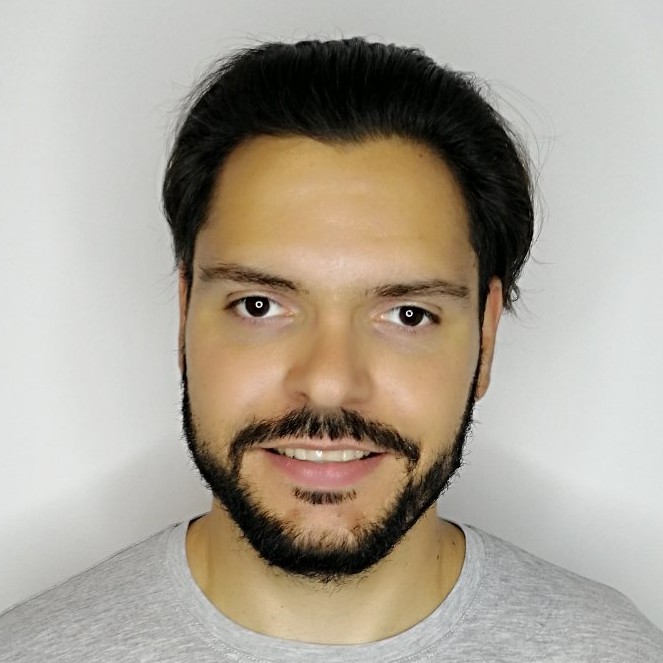 Dr. Petar Nikolov is a Quantitative Researcher, Alpha Analytics and Optimization at FactSet. In this role, he researches various index strategies that aim for a better risk-return ratio than the traditional market-capitalization-weighted indices, uses advanced machine learning techniques to evaluate the plausibility of a financial theories, and develops tools for data fetching and preparation, data and feature analysis, and simulations. Prior, he worked as a data scientist and a software developer. Dr. Nikolov earned a Doctor of Engineering degree in cybernetics as well as an M.Sc. and a B.S. in electrical engineering from the Technical University of Sofia.

Are You Incorporating Rebalancing in Your Strategic Asset Allocation Process?

Long-term investors will need to adopt next-generation strategic asset allocation practices to successfully play their part in a...

Constructing and running tax-efficient portfolios has been a growing need in the market over the last several years.