Over the first half of 2018, Insight examined many of the trends dominating the financial industry and making headlines. However, while headlines tell part of the story, nothing quite captures the movements of the market like data. Here, our panel of FactSet experts have selected the graphs and charts most evocative of the trends driving 2018 so far. Read on for an unadulterated look at the data behind the biggest stories of the year.

We’re at the end of the ninth year of this economic expansion, now officially the second longest business cycle expansion in the post-war period. At 108 months, we just surpassed the 1961-1970 expansion (106 months); the next milestone is 120 months, the length of the 1991-2001 expansion. It’s looking increasingly likely that this expansion will continue for more than a year and will become the longest since World War II. 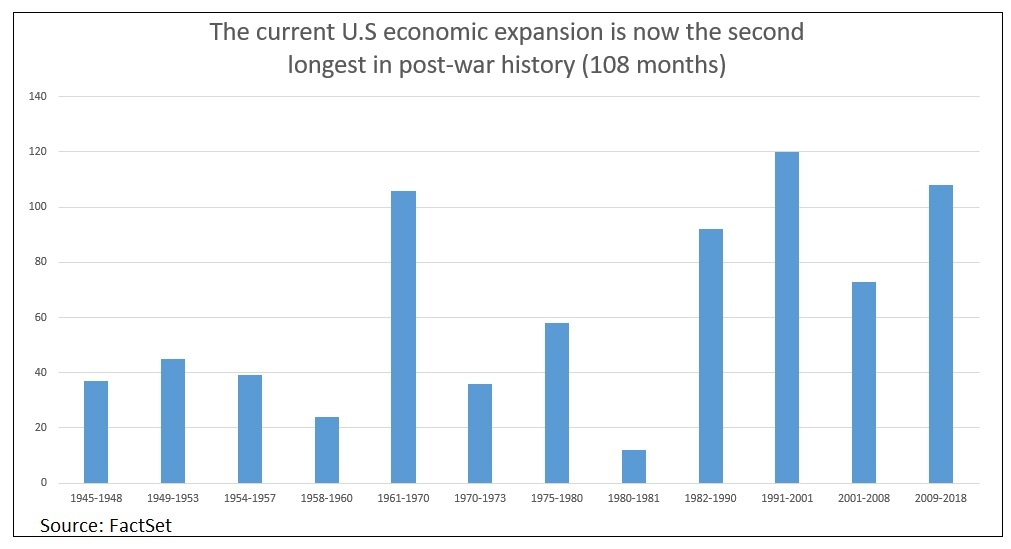 Read more of Sara's analysis in the article: The Economics of H1 2018 in Charts 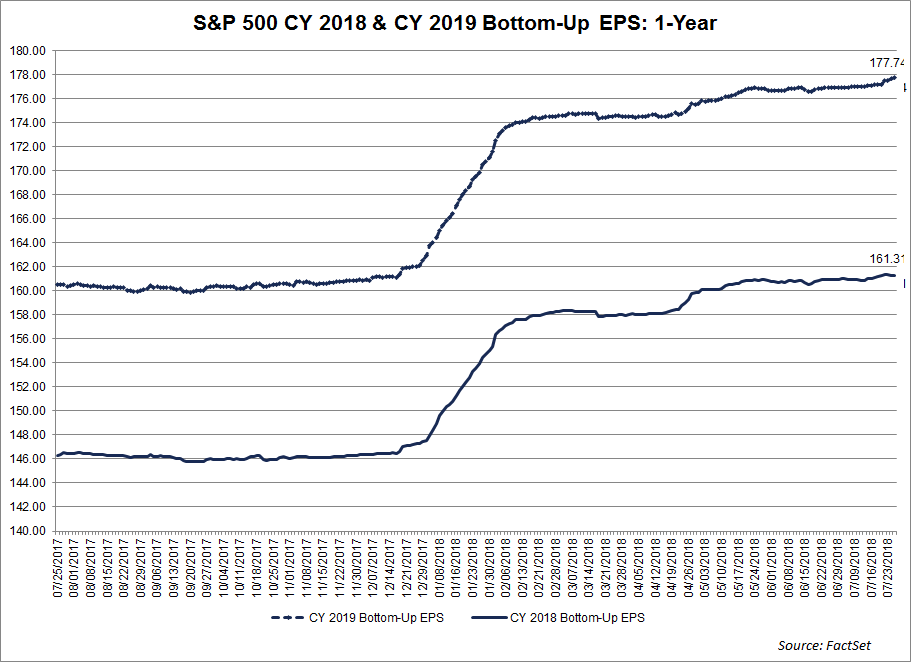 What factors have contributed to the unusually high earnings growth for the S&P 500 in the first half of 2018?

The key driver of the higher earnings growth is the tax reform legislation passed in late 2017, as companies in the index are benefitting from a lower corporate tax rate in 2018 relative to 2017. Analysts began increasing EPS estimates for S&P 500 companies for 2018 and 2019 shortly after the legislation passed in late December. As a result, earnings growth expectations for all four quarters of 2018 increased substantially since December of 2017. Other factors that contributed to the increase in earnings growth in the first half of 2018 included higher oil prices and a weaker U.S. dollar.

Looking ahead to the second half of the year, analysts continue to expect earnings growth of about 20% for both Q3 2018 and Q4 2018. However, rising costs, a stronger U.S. dollar, and escalating tariffs could all be headwinds to a continuation of the rise in earnings expectations for the S&P 500 in the second half of 2018.

LIBOR Replacement Out of the Gates! 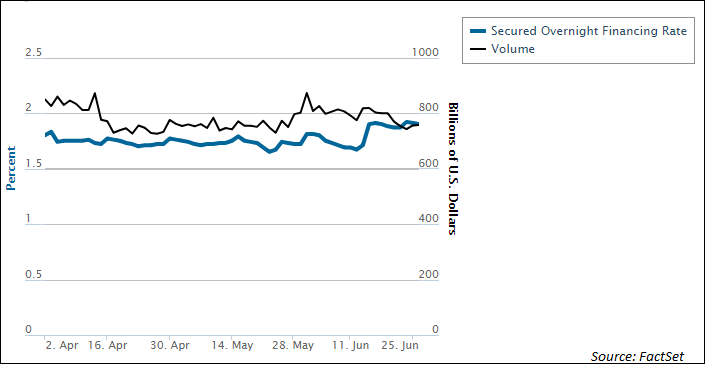 The rate is published and administered by the Federal Reserve Bank of New York, who have quoted daily volume around 700 billion dollars since April, which is way over the volume from the effective Fed Funds rate. 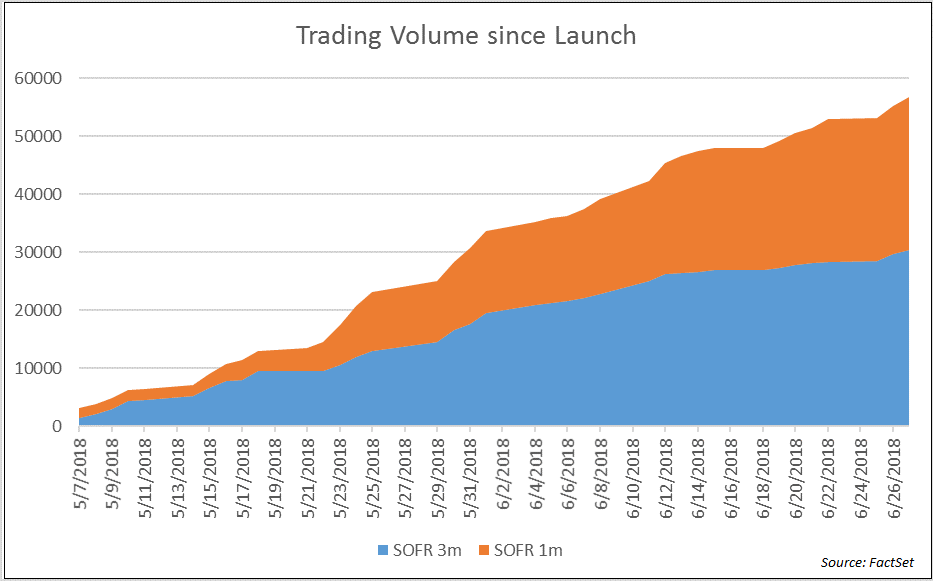 In May 2018, the CME launched the SOFR and it has garnered serious attention. The trading volume soared in the first two months after launch and surpassed the volumes of Eurodollar futures and Fed Funds futures during their respective initialization months back in 1981 and 1988.

Both one- and three-month SOFR contracts seem to be heading in the same direction to attract more volume. The 1m contract serves as a great short-term target and the trading activity for the 3m extends to the 2020 contract, two years from now. That would create strong demand for a SOFR swap; indeed, the CME plans to start clearing OTC SOFR swaps in Q3 2018.

These contracts serve as a great vehicle for spread trading, improving margin efficiency, and transferring LIBOR liquidity in the near term. In longer term, it just sets a foundation for a LIBOR replacement. The show has just begun!

Though the broader M&A market may have issues, 2018 is proving that the top-end of the market is anything but challenging. As a percentage of overall deals, transactions valued over $1 billion are at an all-time high. In absolute terms, the first half of 2018 has reported the second-highest level of deals valued over $1 billion with 200 deals; the highest level was attained in the first half of 2007 with 210 deals. It is also worth noting that the streak of billion-dollar deals started in 2013, and since then there have been over 100 billion-dollar deals in each half-year. Even in the run-up to the financial crisis the streak was only three years (2005 to 2007). And to help complete the pattern, the dot-com boom had a similar three-year streak of 100 billion-dollar deals in each half-year from 1998 to 2000. 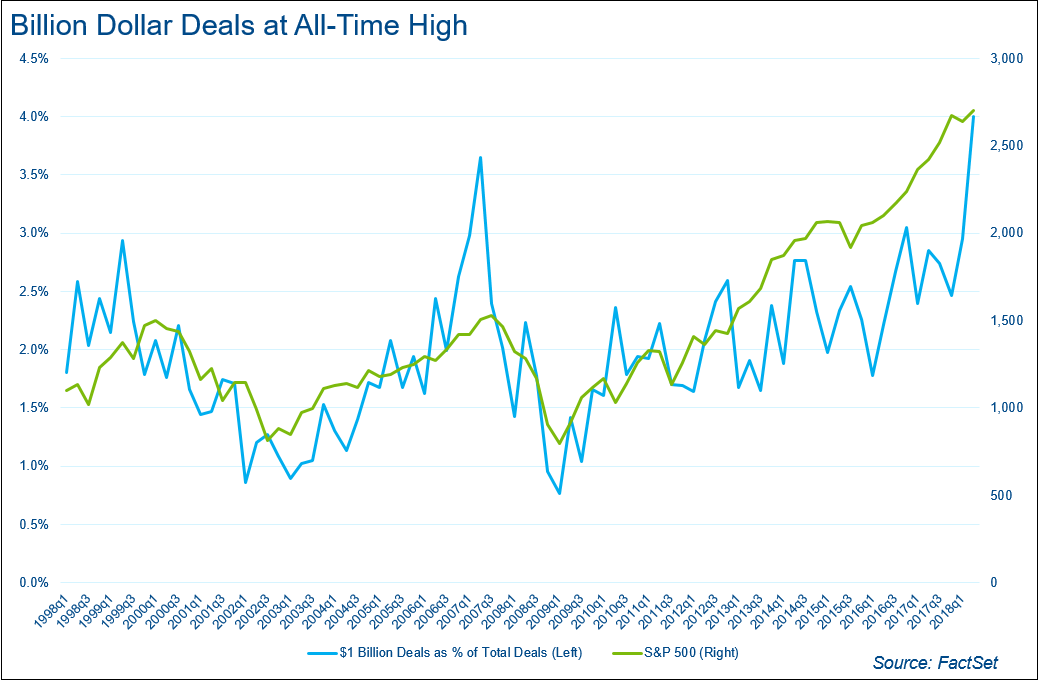 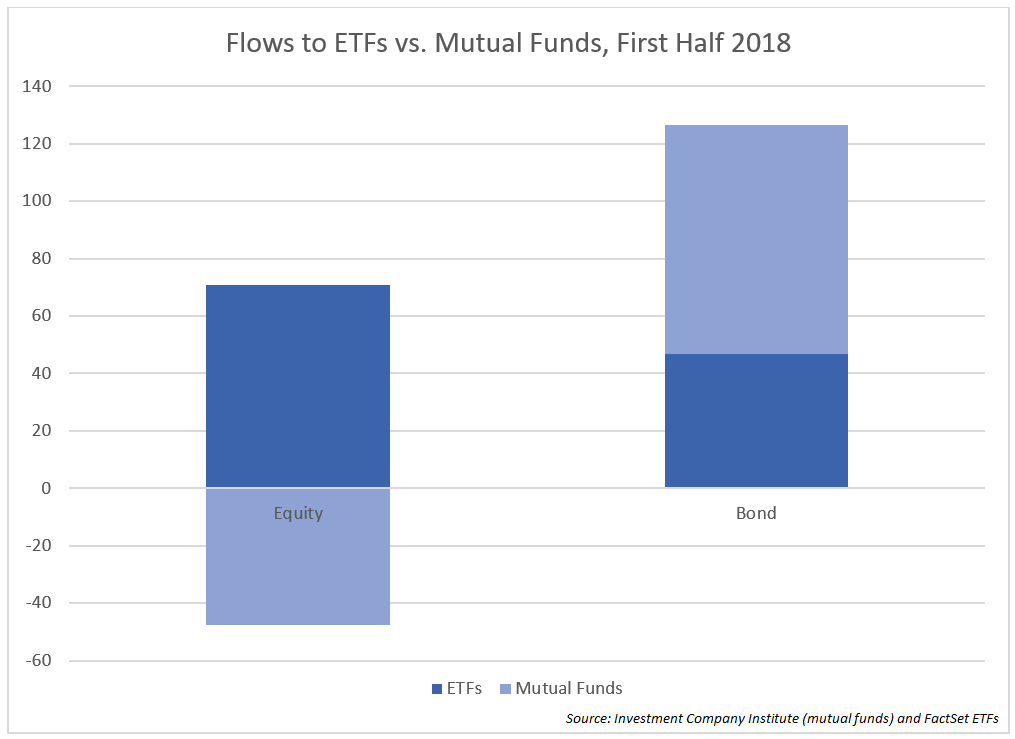 In the first half of 2018, exchange-traded funds captured market share from mutual funds.  In equities, mutual funds have been losing assets while ETFs grow.  In fixed income, both mutual funds and ETFs are growing, but the ETF growth rate is far higher, because bond ETFs started the year at just 1/8 the asset base of bond mutual funds.  21.2% of the combined mutual fund/ETF equity market is held in ETFs as of the end of 2017, up from 10.7% at the end of 2008.  The appeal of low-cost passive investing is now undeniable.