A Literary Interpretation of 2017's M&A Trends and 2018's Prospects

In 2016 we discussed Brexit, Buyouts, and Berkshire, which made for a succinct year-end summary, particularly for fans of alliteration. Those three Bs also fit the themes of the year and subsequent transition to 2017 rather well. This year, however, I think James Joyce himself might be happy with the results that 2017 delivered. Every few months felt like a new chapter in Ulysses, with a different narrative, different styles, and new characters dominating the scene regularly.

We began with the second slowest start in 20 years. However, despite being slow out of the gate, and the expected contraction continuing from 2015’s record year, in 2017 the U.S. market will end with a fourth consecutive year of more than $1 trillion in value, even with a 22% decline from 2016. Conversely though, it will likely end with fewer than 9,000 deals for the first time since 2013. The story is similar globally with volume and value both continuing to decline; however, the positive news is that we should see four consecutive years of more than $2.5 trillion in value and more than 30,000 deals.

Kraft tried to buy Unilever in a monster deal that disappeared as fast as it emerged. This had everything we like in a deal, except it never happened. Berkshire and its PE partners scurried away at the first sign of hostility. The story here was a dead-end.

Mega-deals that attempted to reshape the U.S. healthcare system were blocked by the Justice Department. Deals between Aetna/Humana and Cigna/Anthem never passed “GO” in this version of Monopoly.

Brexit is still leaving its mark on the UK. In the immediate aftermath of the referendum result, activity declined rapidly. However, though the fourth quarter of 2016 showed some life, it was mostly opportunistic from the damage to the British Pound and cheaper prices for UK businesses. It turned out to be just a blip for M&A with 2017 continuing a slide to lower median monthly value and volume.

The U.S. raised rates for the first time in a decade, but even with the accompanying brouhaha from pundits, it was much ado about nothing for M&A.

We saw the rise in protectionist sentiment, and its potential impact to M&A. The current U.S. administration, as well as a few others around the world, carried nationalist sentiment from 2016 into 2017 and threatening or blocking several high-profile deals (e.g., Lattice Semiconductor, HERE Technologies). We used net cancellations of international buyers as a proxy for protectionism and analysis showed that the U.S. was less friendly than China or the EU for the first half of 2017. This was the first time that the U.S. had lead in this metric for two consecutive quarters, going back 10 years.

Vertical integration is attempting to take center-stage. AT&T agreed to a deal with Time Warner in order to compete with Comcast/NBC Universal and the Justice Department blocked that narrative as well as the mega-deal. The last time Time Warner was in a major deal was its ill-fated AOL combination, which is now a highlight in every business school’s “what not to do” merger case study.

Tax reform inches forward. Much of Corporate America is hopeful for a good result here, but if there is any benefit to M&A it won’t be anytime soon. Cash repatriation means more cash on home soil for home growth, but analysis doesn’t support trickle-down to M&A.

Amazon scares everyone. It buys Whole Foods in its largest deal ever, and the market then says it is a threat to every retailer. We now have CVS attempting to buy Aetna as a supposed defense against Amazon in what will be Aetna’s third try at a major deal.

Are we near the end of the proverbial day? We’re nowhere near Bloomsday, 2017 hasn’t ended yet, and we still haven’t figured out what character we are in this adventure. And besides, I haven’t had any epiphanies along the way. But let’s make some predictions anyway.

Global M&A has been contracting and is expected to continue that path for the next six to 12 months, with some expected regional variability. Two major unknown variables include the severity of a potential market correction and the unwinding of central bank balance sheets that will both impact M&A activity. 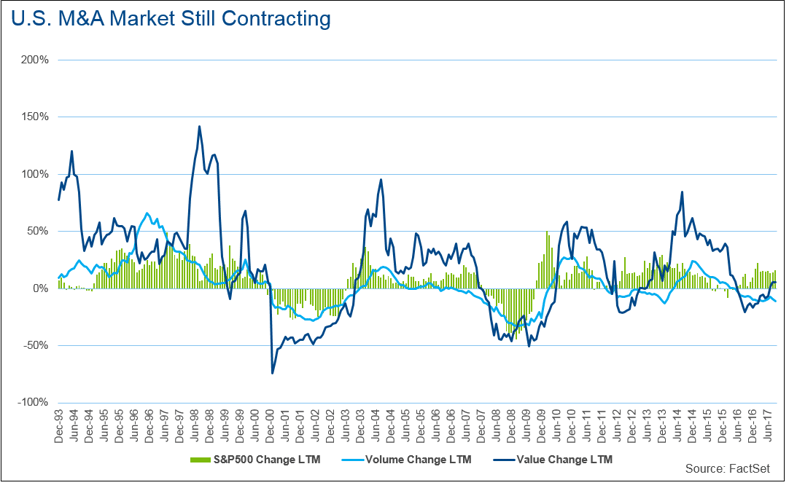 EMEA is cautious due to ECB unwinding that has to initiate sometime in the next year (if not sooner), and continued uncertainty from Brexit negotiations.

AsiaPac is driven by China, and our view is that expansion of government oversight is one of the reasons keeping things flat. That oversight works both ways: Chinese government looking after its own companies and foreign companies being cautious of Chinese buyers.

Unlike last year where we predicted a major Berkshire deal, this year we’ll have to sit on the sidelines waiting with Vladimir and Estragon (and, no, we are not Pozzo here). The 2017 plot is too complicated to make major predictions, so we're left sifting through the footnotes looking for clues for the next big trend.

I’d like to think a return to normalcy will be the theme, but can anyone remember what that looks like? I can assure you that we won’t be betting on heads 92 times in a row, even though, as Guildenstern suggests, we may be “within un-, sub- or supernatural forces.”